So. Even if Ric Flair WAS there. How was he going to help this travesty? 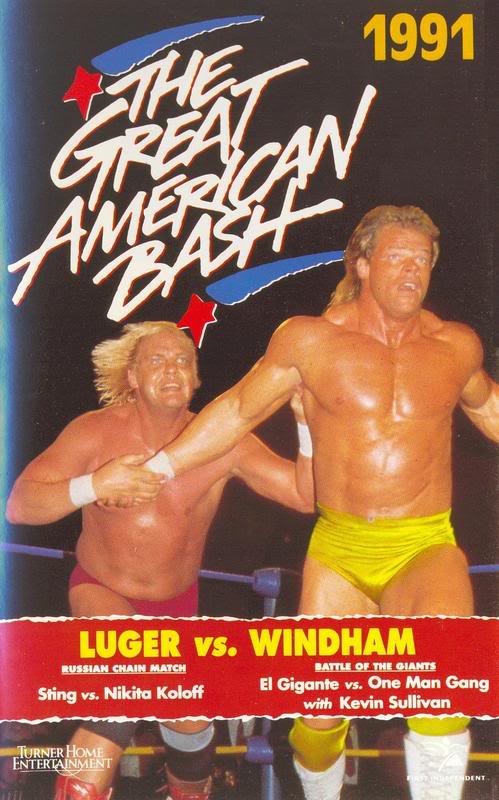 So Ric Flair had a huge blowup with WCW management before this show and left as Champion. I’m going on record to say that um… WCW fucked up.

So the best way to open a Pay Per View is to have a match in which there will be absolutely zero action. These guys did a lot of jack and shit here, plus it was made worse by the fact that it was a capture the flag rules deal and no one was taking the only bump that would we slightly perversely entertaining. A huge misfire right out of the gate on a show that desperately needed a great start. 0-1

We get a lot of time wasting while they take the stupid scaffold down. They discuss the Flair deal in the vaguest terms possible.

We waste more time with Paule E and Arn discussing the mixed tag match later in the night between them and Rick Steiner and Missy Hyatt. Paul was fine but Arn phoned this shit in.

Sigh. This was better than the first match but that bar was so low that if it didn’t the space time continuum would be ruined forever. Neither guy meant anything, Hall was still about a year from getting it and Zenk was generic store brand vanilla ice cream. What a mess. 0-2

Winner: Studd gets a win with a suplex and not the cool finisher the announcers had built up the entire match.

Ron was fine but in no way way Nash ready to be on Pay Per View. Super sloppy Hoss match where half of the contestants were green as grass. To top off the series of mistakes on this show they gave this thing almost ten minutes. Ten minutes. Kevin Nash. 1991. Come the fuck on Dusty. Yeah, it was his fault, no way he wasn’t booking with the Dustin and Hardliner shenanigans throughout the night. 0-3

Winner: Ron got the win with a shoulder tackle.

Oh hell yeah. Probably the highlight of this show. The legendary WCW TOP 10!

2. Barry Windham (In the mid-card directly before this so the rankings are iffy.)

5. Bobby Eaton (Probably too high but it’s fine because he rules.)

7. El Gigante (Maybe the worst ever.)

So the cupboard wasn’t bare but it definitely was not the best it had been.

So the breakup of one of the best teams ever that should be a FIGHT turns out to be…a dull affair where Morton works the leg the entire time. Morton showing zero interest in embracing his new gimmick only serves to make this match worse. Like they are essentially just wearing variant clothes. All Richard did was put his hair in a half assed ponytail. Cut your hair and make an effort dude. 0-4

Go ahead and guess who this match is built for. I’ll wait. I like Dustin. I really do. But it doesn’t change the fact that his Sam Houston built ass should not have been pinning people with Lariats in 1991. Badstreet was the highlight of the match and I can’t figure out why Brad Armstrong was always twice as charismatic under a hood than without. 0-5

Winner: Dustin was able to overcome a 2-1 deficit with his Herculean physique and years of experience.

The masked man that we all know is another Dusty booking crutch that he used about once every two years. They didn’t even buy Pillman a mask that actually fit him correctly, I guess to really sell the fact that no one gave a shit. Brain was good but Badd was still just trying to learn to do something well that wasn’t a punch. Blah match with junk ending. Moving on. 0-6

Winner: The Dog wins after Long attacks him in front of the ref.

Eric Bischoff tries to interview Missy Hyatt while she is in the shower. Try that shit now, I dare you. Also this was the far inferior brunette Missy. Some people look weird with their natural hair color.

I chose to watch this show. Had this happened a few years earlier it might have been alright but this was just a swing and a miss. The lumberjacks themselves where the who’s who of who gives a fuck. Honestly the match just seemed like it was set up so Dustin could be involved again and the Hardliners could be established as in the building for that awesome “main event” angle. 0-7

Winner: Josh gets the win because Dustin is the greatest.

The real highlight of this match was the 90’s hair band hair and makeup worn by Gang and Sullivan. Other than that just an awful match that had zero redeeming value. Just trash. 0-8

Winner: Gigante following powder a Jobber Clobber and almost forgetting how to do a Lateral Press.

They gave this the super important match build up highlight reel before we start. And then. It was a match. Just a regular ass boring match in what could have been something great. The psychology of the touch the ring post deal kept getting switched around either by the referee or the way they paced out the match. I was hoping this would be one of the matches that might save this show and instead it was just another disappointment. Shit. 0-9

Winner: Nikita in the lamest way possible. The getting my ass beat and getting lucky finish does zero for anyone.

Finally a decent match. This wasn’t an all time great or anything but definitely was a thousand times better than some of the garbage that preceded it. The crowd wanted no part of this though and the “We want Flair” chants may have been the only noise going on inside the building. Luger deserved better after how hot he had been in the previous couple of years. My only real complaint is them putting him with Harley and Hughes on this night and not waiting so this crowd had something to cheer for instead of them being confused. 1-10

Before the match started The Hardliners kidnapped Missy Hyatt and take her to the back. Don’t worry, it’s hardly brought up and no one saves her. But at least Dusty’s buddies made it to the main event somehow. At this point this could have been the greatest match in history and maybe wouldn’t have gotten a point. As it was it’s really just a dark match main that I guess they figured would send the crowd home happy. Didn’t work for me. Woof. 1-11

Jim and Tony sign us out. Poor bastards had to pretend this was good. 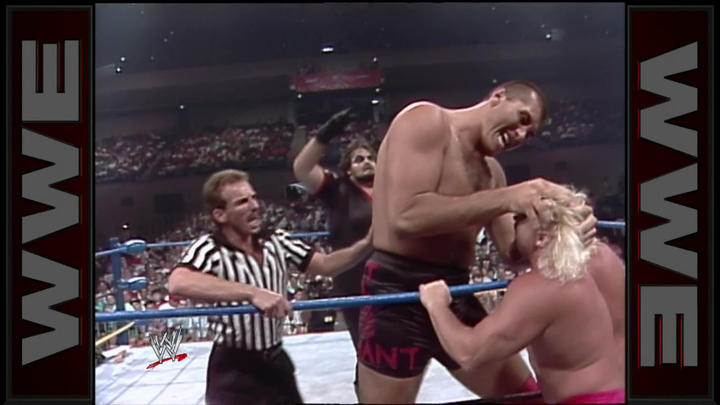 Final Tally? 1-11 Maybe the worst WCW show I have ever seen. Just a complete turd from beginning to end. Watch it only if you hate yourself.

Oh yeah. Please support and hit up our store!