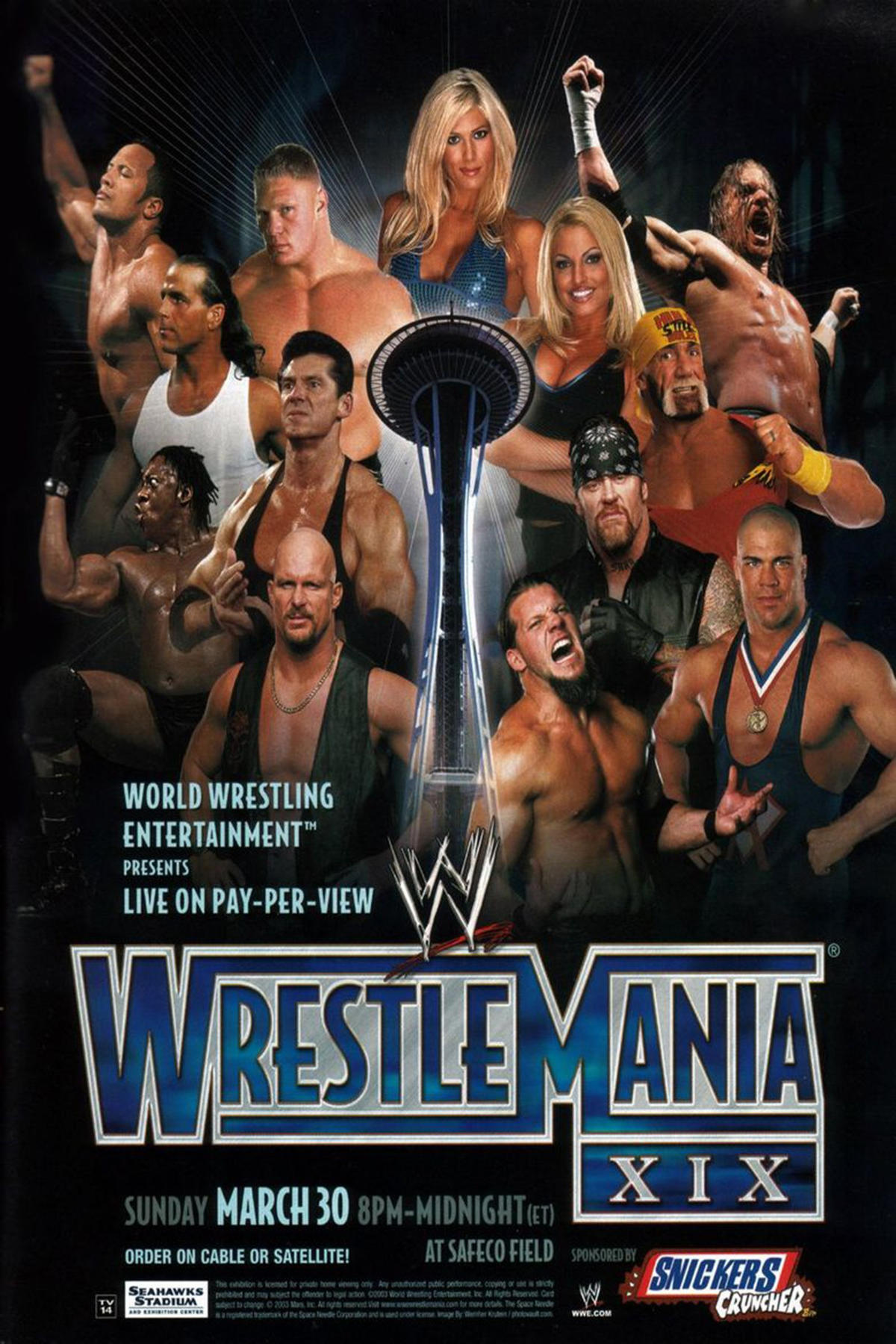 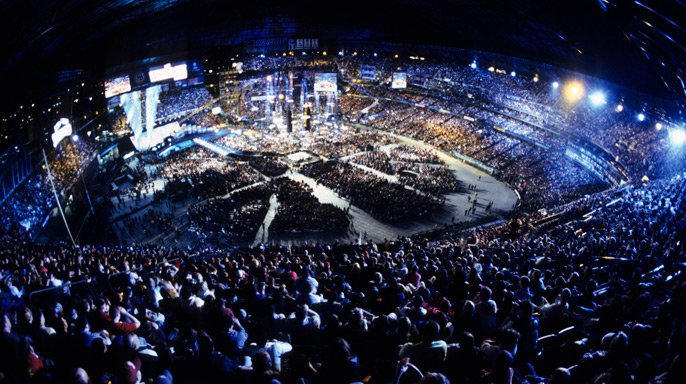 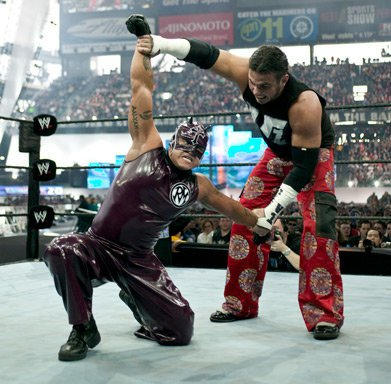 Rey with his Daredevil gear on. I like the setup of the building but I was highly disappointed with this one. It seemed like we only got a few minutes of a longer and better match for some reason. I guess they needed more time for Fred Durst later. 0-1 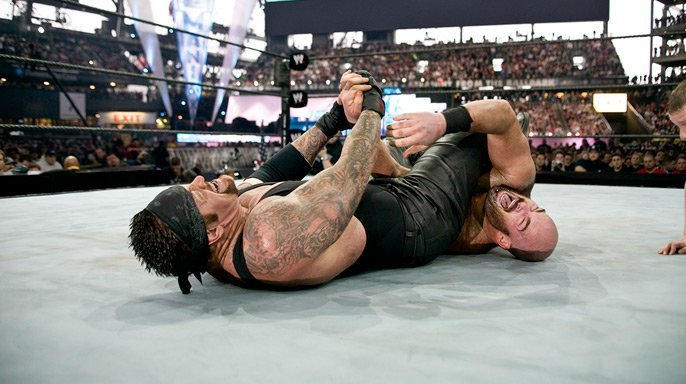 This show is off to a rip roaring start. Not only was it kind of boring but Undertaker had to look like the world’s baddest human by defeating two giants essentially (other than Jones showing up to do some kicks and yell) by himself. 0-2

Winner: Undertaker after a Tombstone on Train. 11-0 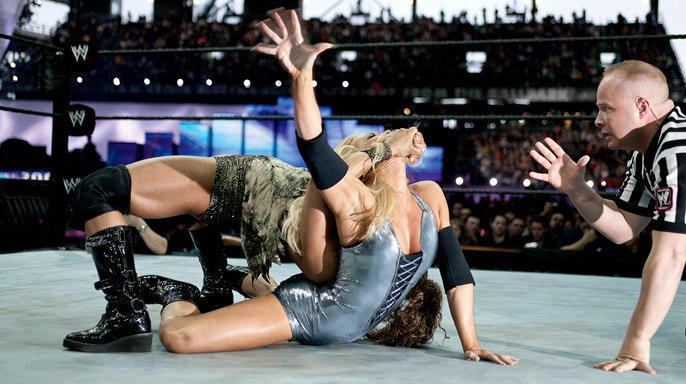 Really good match from the ladies here. Could have done without Jerry’s commentary for a dozen different reasons though. Trish still wasn’t at her best but was hanging in there with the other two quite well. Honestly this was the first thing on the show that exceeded my expectations. Good times. 1-3

Winner: Trish regains the title after the Chick Kick. 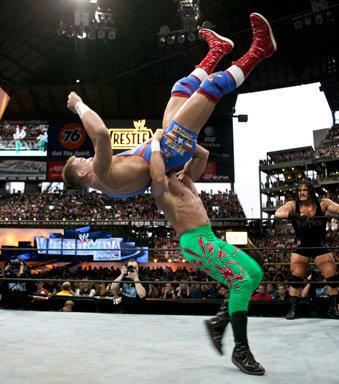 Hell yeah I liked this. My only real complaint is that this was a little bit too short. All six of these dudes delivered and the Smackdown tag team division as a rule was awesome at this point. Plus all three teams had matching color schemes and I’m a sucker for that. Point. 2-4

Winner: Champs retain after Shelton pinned Chavo after a Gore. 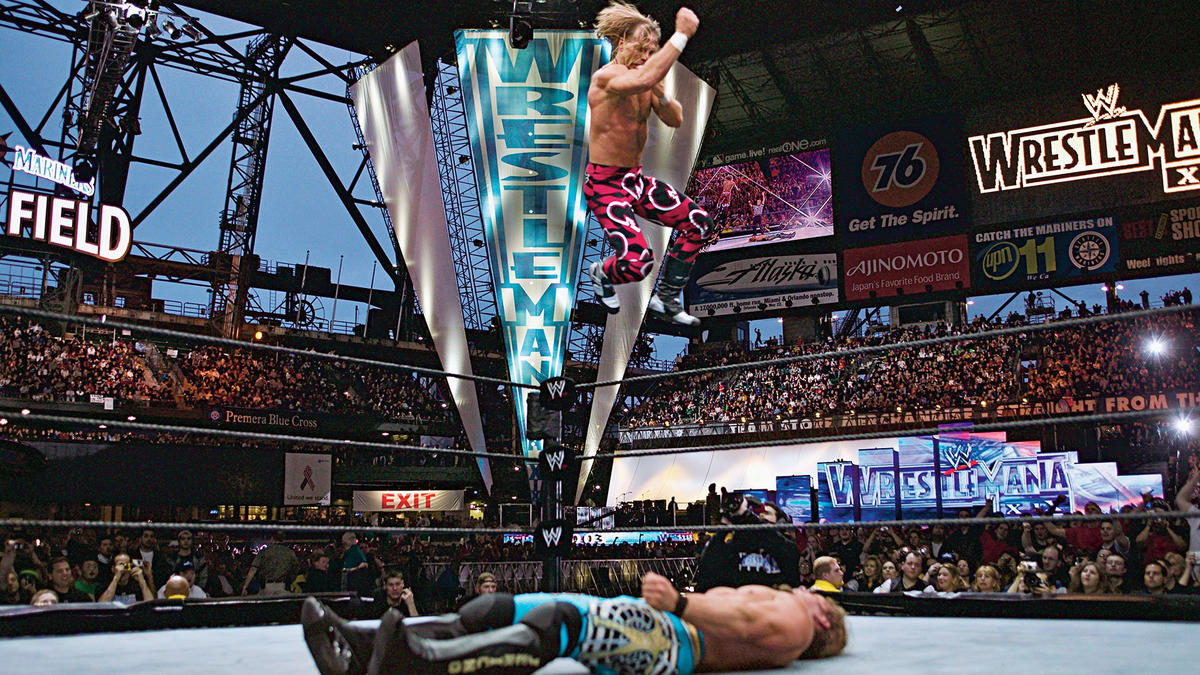 Great. They went out there with the intention of stealing the show and damn near succeeded. Shawn was almost back to his peak and Jericho was on a roll of his own. Just another example of how amazing both guys, especially Shawn were when the lights were at their brightest. What an awesome contest. 3-5 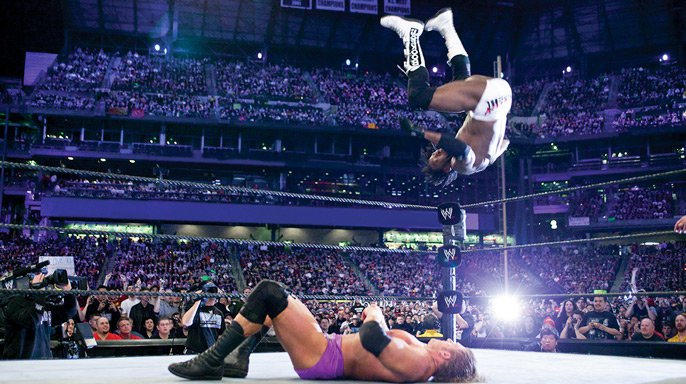 Ok. So taking away the ridiculous ending that made everyone involved look bad…the match was actually pretty good. HHH obviously has a bad reputation in this time frame for never wanting to lose but the dude generally brought the goods in the ring. Booker was also fabulous in this period so it shouldn’t shock me that I enjoyed this. The ending was still real dumb though. 4-6

Winner: HHH because the Pedigree works on everyone every time or something. 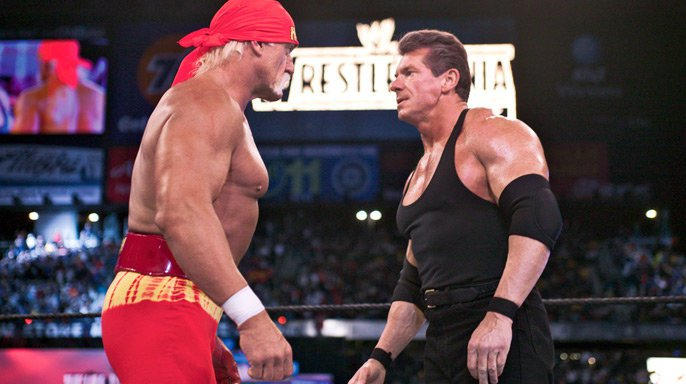 Say what you want about Vince but he will always take an ass whipping to make a match great. I mean. This time it only made it mediocre at best but he did try. At least both these old fuckers bled. Poor Piper showing up and looking terrible only made me sadder. They threw everything they could, every imaginable cheap booking trip to make this into a classic. But in the end? Crowd liked it but me? Big old nope brother. 4-7 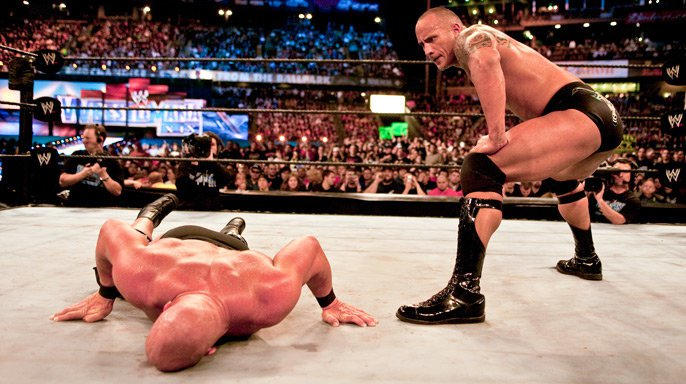 If this isn’t my favorite feud of all time it’s definitely top three. These two men put on a trilogy for the ages at WrestleMania and sadly due to the health of Steve this was the last one. Now as far as that series went I would have to put this match in the dead center. A bit better than 15 but not quite as amazing as 17. That being said it was still a bonafide classic, especially since now we know the condition that Austin was in at this time. Two of the best that ever did it went out and got it done. Sadly for Stone Cold this was the last time it would happen. What a way to go though. 5-8

Winner: Rock finally gets his win with three Rock Bottoms. 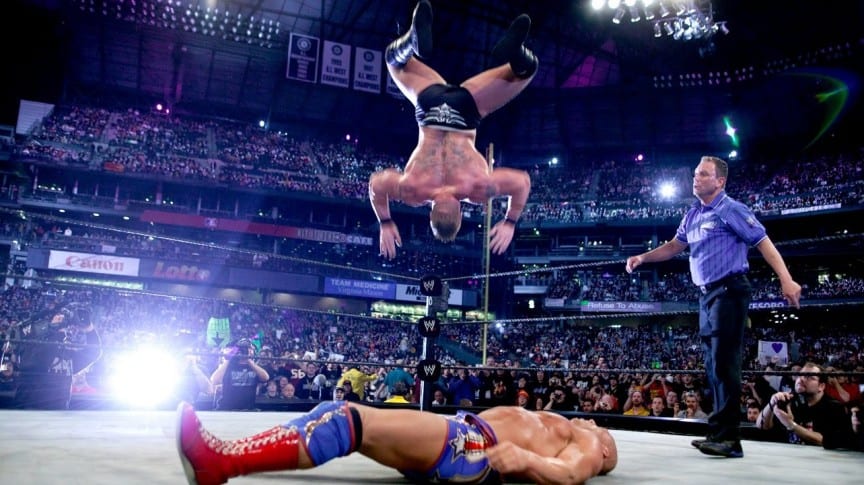 ANOTHER great match closing this thing out and yet another reason people hold this show in such high regard. Other than Brock almost dying this was as near perfect a wrestling match as you can get. Considering who was involved that should not be a surprise. If any match on this show could follow the encounter that just happened it was maybe this one. Top notch performance from two guys that were not THAT experienced as professionals at this point. Especially considering Kurt had a broken neck again and Brock knocked himself out. Incredible. 6-9

Winner: Brock with and F5 after nearly dying. Legitimately. 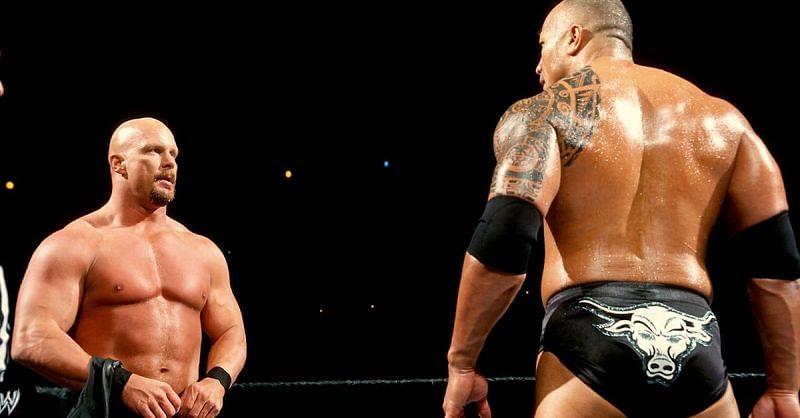 Final Tally? 6-9 The stuff in this show that meant to deliver did so in spades. Even the stuff I didn’t enjoy (the old guys fighting) I can definitely see where people would like it. There is a reason people love this show obviously. Mostly a thumbs up from me.