30 years ago this month Hulk Hogan saved America or something. 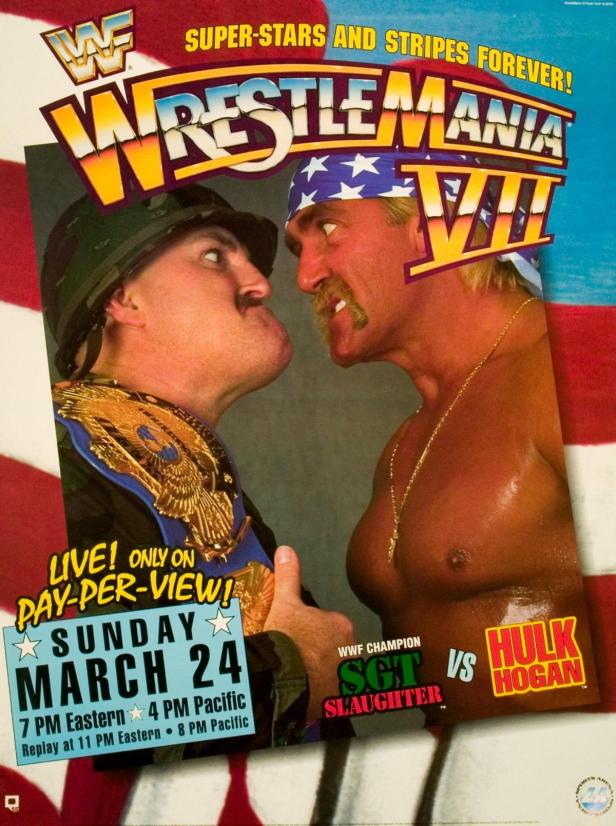 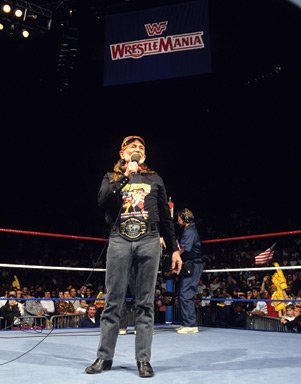 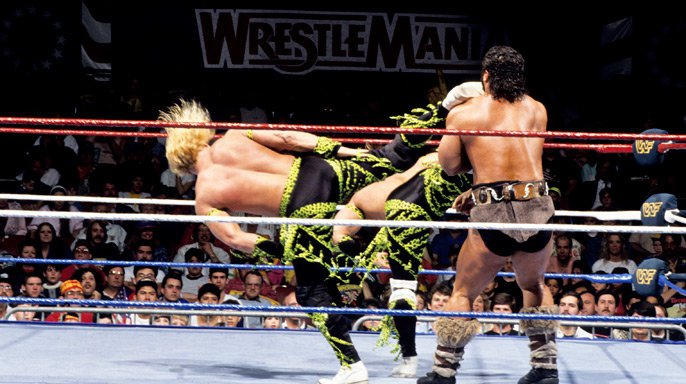 The only negative part of this match was Hacksaw on commentary. The Rockers were at an elite level team at this point and I love the Faces of Fear anywhere you put them. This was a damn good start to the show and if everything else lived up to it I’d be a happy dude. From what I remember though? It won’t. Still. 1-1

Winners: The Rockers nail Haku with a Missile Dropkick and Crossbody for the dub. 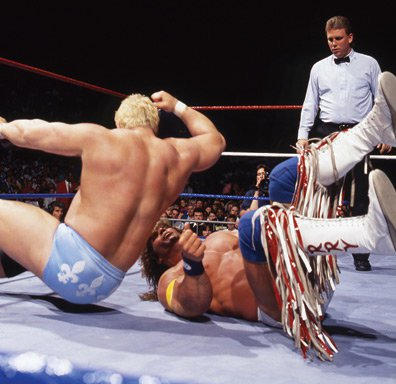 Well this episode of Darkside of the Ring is already making me sad. I love Kerry but neither of these guys were any good at this point. Dino’s second rope chop was especially bad. Depressing, for multiple reasons. 1-2

Winner: Tornado with the Claw and the Discus Punch. 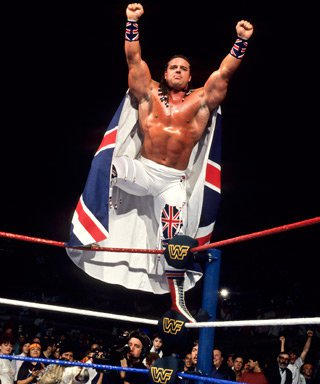 I wonder what the monthly steroid bill was for the competitors in this match. Also the death total so far on this show is 8 so I’m still sad. On a positive note this was a lot better than I remember it being. It helps that they followed a junk match. Still, both guys went above and beyond what I remember as a kid so that’s good enough for me. 2-3

Winner: Bulldog takes it with the running Powerslam. 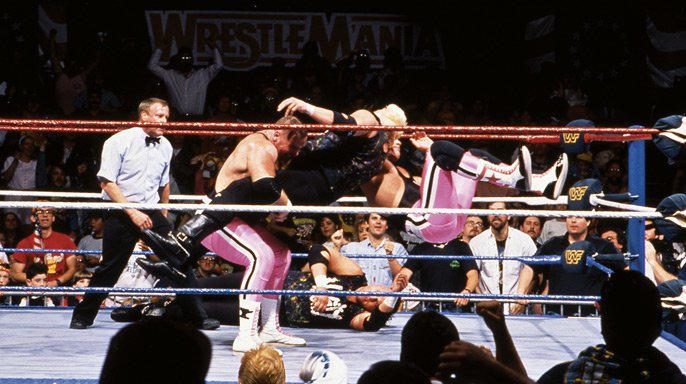 Welp. Move the total to 9 now after adding the Anvil. I hate getting old. Another good match though. This maybe the best non garbage match contest the Nastys ever had. Having one of the greatest teams in history across the ring from you definitely helps in that area. The tag division was completely killing it at this point and this show is better than I remember. 3-4

Winners: The Nastys get the titles after a shot with the helmet on the Anvil. 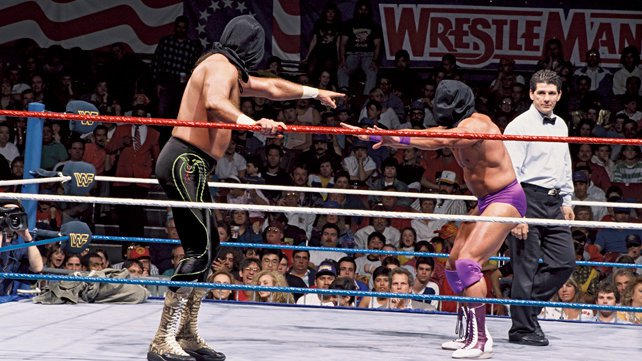 OK. So as a match this was a complete and total shit show that really exposes basic things in the business. Like an Irish Whip doesn’t make sense during the best of circumstances and yet can be avoided better when you are blind? Come on. Now. I’m not here for star ratings. Did I enjoy the match is the question? The answer is no. I enjoyed the ending and Rick getting what was coming to him but I can’t recommend this in good conscience. 3-5

Winner: Jake with the DDT. 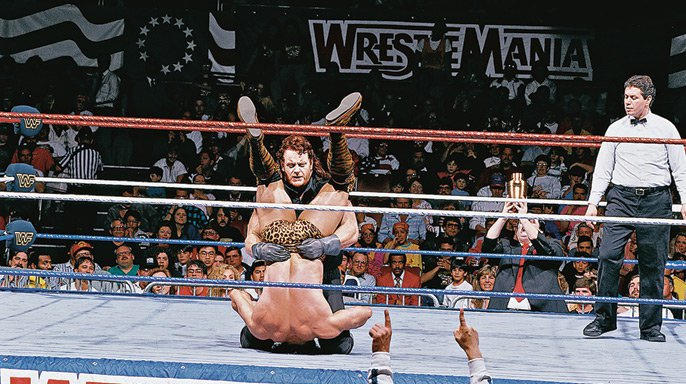 Make it 11 and the beginning of something special. Crap. Nevermind; I forgot about Fink. Make it 12. Anyway the beginning of the streak starts more with a whimper than with a bang. This isn’t what I would call good even on accident. It’s really short though so there’s that. Snuka couldn’t go anymore and Undertaker’s gimmick wasn’t made to have good matches in 1991 so there we are. 3-6

Winner: The Streak begins with a Tombstone. 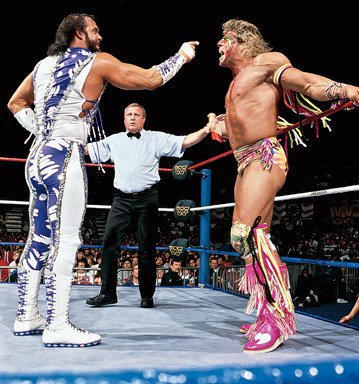 Damnit, 15. This is still, even with all the matches I have seen one of my favorite things ever. The story from beginning to end was amazing and was without a shadow of a a doubt the best thing the Warrior was ever a part of. This was put together perfectly from the second that Warrior WALKED to the ring to the very end. It was a tribute to just how good that the Macho Man was in his chosen field and makes me miss the dude’s in ring work tremendously. Throw in the charisma of the Warrior and the pure skill of Sherri and you have damn near perfection. I’d give it two points if I could. 4-7 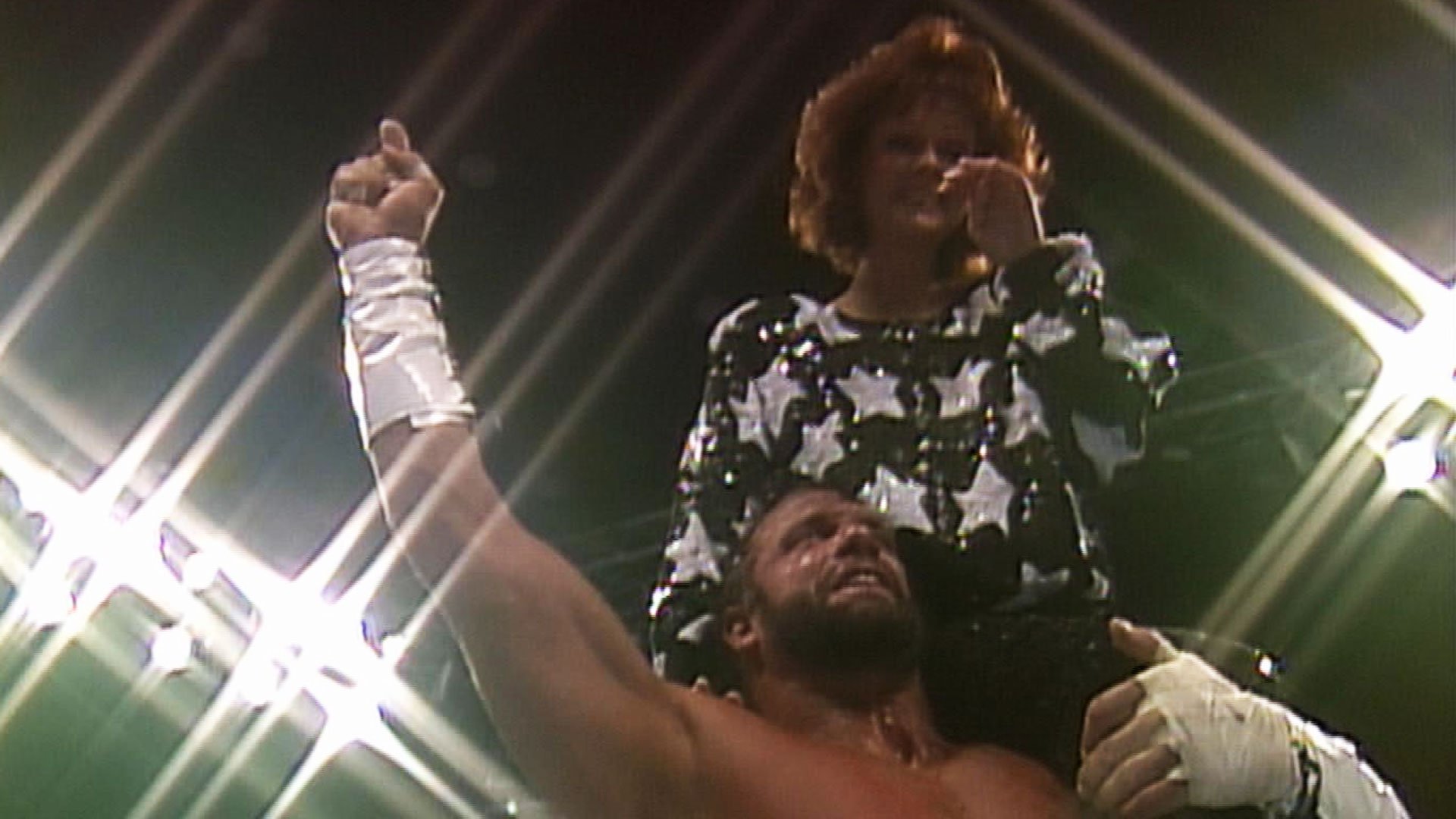 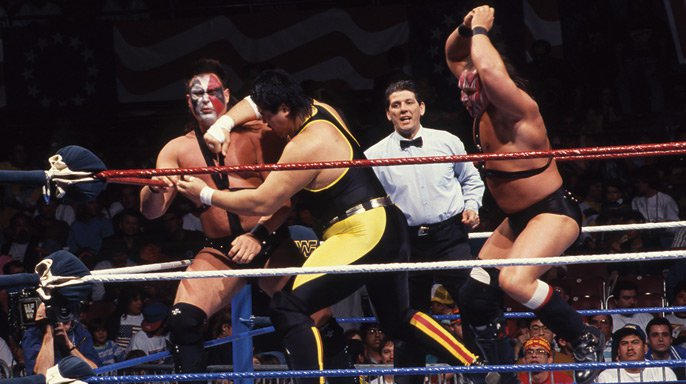 Sigh, 18. These four were not in the same page in any way shape or form. Kitao wouldn’t have sold had you shot him with a rifle and this version of the Demos was on their last legs as it was. Real bad. 4-8

Winners: The Japanese contingent got the pin on Smash after a God awful powerbomb on Smash. 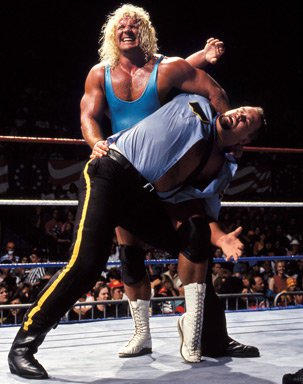 Sigh AGAIN, 22. I have a soft spot for both of these guys too and they delivered a fine contest. Boss Man was in the best shape of his career and Perfect was still a little bit away from the back injury that would slow him down in the ring a bit. Adding Andre the Giant to the festivities really brought a fun element to it. Good times, even though Perfect show have probably lost. 5-9

Winner: Boss Man got the DQ win after the Faces of Fear got involved. 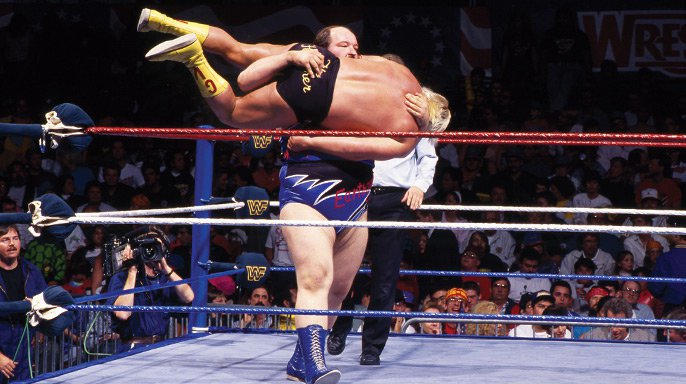 Shit. 23. Babyface Hammer was odd and Quake sold way more than he should have. This was luckily kind of short but not short enough for me not to deduct a point. 5-10 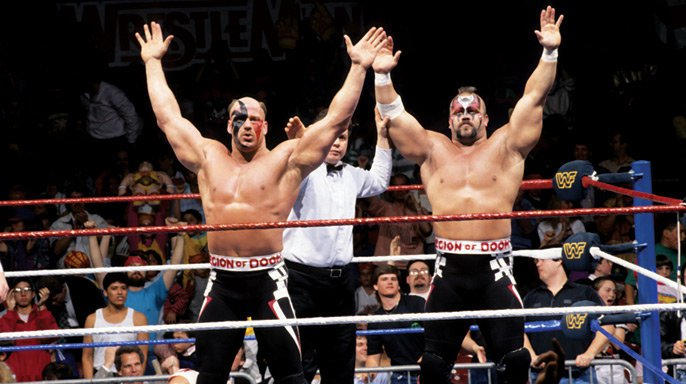 Add another 3 to my sadness as we hit 26. This was a SQUASH. Hey, I got to see Power & Glory and the LOD dis overstay their welcome since it was only a minute. I’ll allow it. 6-11

Winners: The Warriors murdered Roma with the usual. 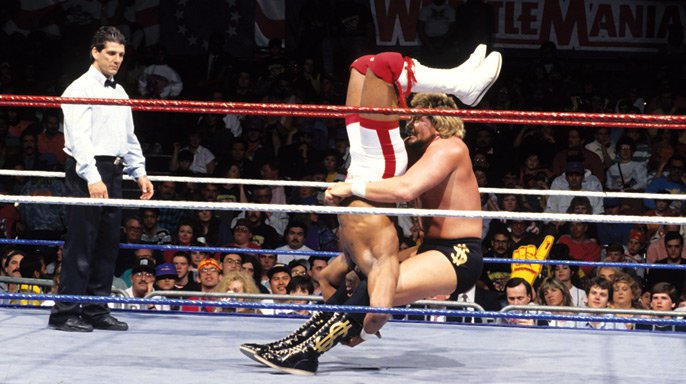 Up to 27. Man is this show sad or what? Speaking of sad, Virgil was never any good in the ring and had maybe two good matches. This was not one of those two. Having Piper at ringside added a little something, just not enough. 6-12

Winner: Virgil won via countout after some Piper shenanigans. 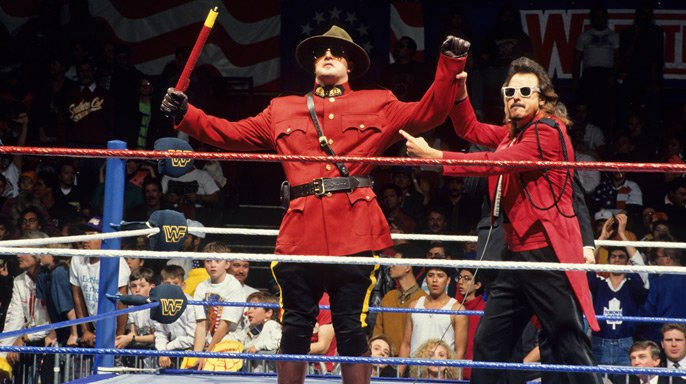 Another squash. Nothing to it and it wasn’t even a fun minute squash like the LOD match. Nope. 6-13 Also add Joey Marella to the list at 28.

Winner: The Mountie via the shock stick. 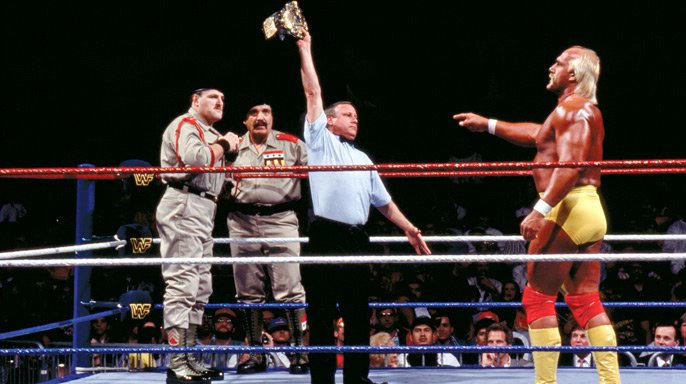 Hey, on a positive note Adnan is still alive so I don’t have to add anyone to the death count. This wasn’t world changing or anything but it was a solid main event for this era of Hulkamania. They kept it moving and Hogan even went to the top and bled. You know what? I’ll take it. 7-14 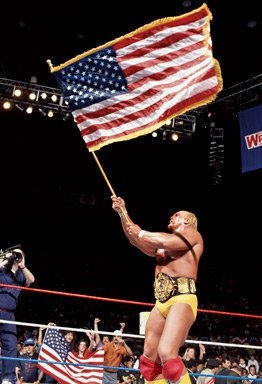 Final Tally? 7-14 This show had it’s ups and downs to be sure. But, the Savage/Warrior deal is almost worth a thumbs up on its own. That being said; and this is coming from a guy that books 15 match shows once a year, it’s really long. Skip around for the good stuff and this is just fine.