The last Pay Per View of this garbage year.

Gotta open with something I guess. This will be as good as anything on the card I’m sure. I’m not sure however about Drew’s entrance sword deal yet. AJ started fast but it didn’t help. Drew beat him from pillar to post for a few minutes. AJ then took his knee out on Drew’s first attempt at the belt. They then go back and forth for a bit. AJ does a cool Calf Crusher through the ladder. They do a lot of the usual ladder stuff and both dudes kill it. Then…

Miz had a clear path until Omos stopped him and then absorbed a chairshot like it was nothing from Morrison. Honestly the only reason for Miz being in the match was an excuse for Omos to leave ringside. Great stuff though especially from Drew and AJ. Sucks to be Miz I guess. 1-1

Winner: Drew retained by retrieving the title after a Claymore on Miz.

Reginald the Sommelier joined just in time to save Carmella from looked to be a bad bump on the floor. Carmella looked good working over the already injured back of the Champion. Hell of a match all the way through and maybe the best singles match of Carmella’s career. Nothing to hate in this. 2-2

New Day got most of the offense in the early going. But this seemed like a coming out party for Cedric finally. They discussed his attitude and new style for most of the match plus he was the deciding factor in their win. Another solid one. 3-3

Winner: The Hurt Business won the straps after a Lumbar Check from Cedric.

So Lana’s redemption arc ends as they all should, with Charlotte doing the wrestling for her. Really solid tag match with Charlotte looking good in her return. Ric watching backstage looked like a zombie but with much as he’s put that body through he might be. Hey, the good guys won and Nia didn’t kill anyone. That’s good enough for me. 4-4

Owens started out FAST. He even murdered Jey’s leg when he immediately interfered. This was just a brutal fight from two (well four if you count Jey and Paul) of the best things going today regardless of company. Owens never quitting regardless of the odds and Roman ramping up the brutality and desperation as the contest continued was an amazing story. Match of the night in a walk. 5-5

Winner: Roman retained after retrieving the title following a dick punch and guillotine.

Randy wearing actual clothes helped sell the stipulation immediately. I was expecting to hate this and do nothing but mock it and yet…I enjoyed it. Yeah the ending was kind of dumb but that was to be expected. These dudes did what they could to make this entertaining and moving the flames away from the ring was a good idea. Screw it, I may take some heat for this (ha) but I liked it. 6-6 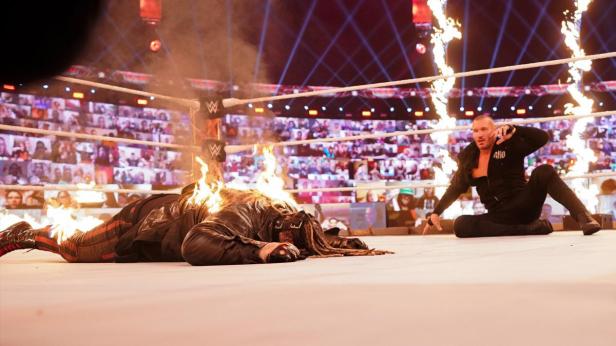 Overall Thoughts: 6-6 I enjoyed everything on this show one way or another. Even the main was not as terrible as some were saying. Seek out Roman v Owens as soon as you can though. Good final PPV for the year.