A stolen leg is probably the highlight here.

Commentators: Vince and The King

Everyone on the match not named Jake looks like a million dollars. Jake looks winded just thinking of the word cardio. Ahmed (who not surprisingly has an injury taped up) would have been a major star had he not been made of glass. Even with Owen in there this match wasn’t anything to write home about. 0-1

Winner: Owen and Bulldog after Jake taps out to a kneebar after a racket shot. 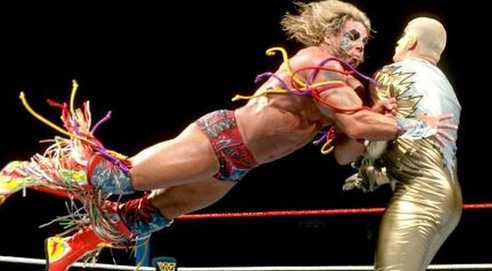 This wasn’t even a match. The 1996 crowd doesn’t let me down in being trash though with a chant that I won’t repeat here towards Goldust. The two highlights of this “match” were the Warrior’s always awesome music and some dude in the crowd rocking a Jerry Stackhouse jersey. Warrior shouldn’t be trying comedy and they shouldn’t have tried this match. 0-2

Razor was on his way out so the result wasn’t much in doubt here. Best match so far of the night because both dudes got their shit in and delivered on a solid (if a bit slow at times) match. I miss WWE Razor. Glad he finally turned his life around. Good enough for a point, especially considering the junk before it. 1-3

Winner: Vader gets him with a butt splash. Razor goes out to a non finisher.

This was a solid tag match. Nothing really stood out except for 1996 Sunny. The fact that this card is so bad that even this bland ass match didn’t hurt my feelings and makes it worth a point gives you an idea of how much I’m not digging the entire presentation. This gets a point for Sunny only. 2-4

Winner: The Donnas after a small package and some Sunny Shenanigans.

Tweener Diesel was the god damned GOAT. Not quite as great as I remember but still a damn good fight. Shawn (and this isn’t a hot take) would have been way better off being a cocky dickhead than the watered down version that he was during most of his title reign. Both guys busted ass and really tried their best to save this abortion of a show. Diesel did some great work on his way out of the company. Brother stole the leg of Mad Dog Vachon for God’s sake. Kevin Nash is a saint. 3-5

Winner: Shawn after some leg shenanigans and Sweet Chin Music. 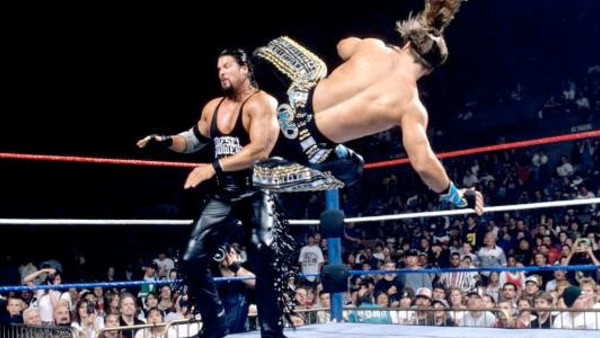 Final Tally? 3-5 I know technically that’s not a bad score but I can’t tell you how much I didn’t like this show. Honestly it could have been 1-5 and I wouldn’t argue about it. Check out the main event and ignore the rest of this crap.