Back on the WCW B-show train! 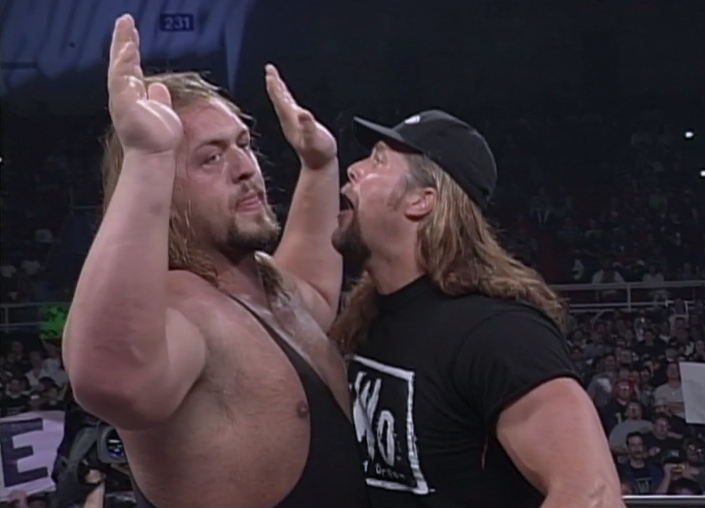 Straight up squash for team Steiner. The story with Scott not being a good teammate was dumb as hell. Dude was killing fools. Why does he need to tag? Gedo getting murdered gets a point. 1-1

Winner: Team Steiner after the Screwdriver to Gedo.

This was kinda alright. Nagata doing suplexes is something I can get behind. 2-2

Winner: Miller with the Feliner.

Hall does the survey. One more for the good guys. Louie kisses Hall’s ass and Larry Z arrives with a pep talk for him. Hall challenges Larry. Louie attacks the old man from behind but the plan backfires. Yeah let’s put this boring old golfer over anyone at this point. No match. I almost deduct a point out of spite.

Not the best match they would have but still a really good one. Them both being heels was a cool twist though. Say 13 stars or whatever.  3-3

Winner: Jericho with the Lion Tamer.

Disco Inferno interrupts to dance. Chavo calls him a joke and instantly becomes my hero. Disco hits him with a Chart Buster though for this slight. Goldberg was expecting to kill someone so Disco eats a spear and jackhammer for his trouble. That’s two matches that didn’t happen now.

Hell of a match here. Both these dudes knew each other so well it was almost hard for them to not be entertaining. This is the good stuff. Rey just keeps plugging along. 4-4

Winner: Rey with a variation of the West Coast Pop.

This was 99% storyline advancement but I can’t say I was bored with it. Hogan tried to keep his team together but failed. Still it was something to see. 5-5

Winner: Luger by DQ after the nWo interfered.

Final Tally? 5-5 This show is still all about recapping stuff we’ve already seen on the more important show. All the matches were fine this week though and we got a title change. Plus it was sun 2 hours and I’m about that.