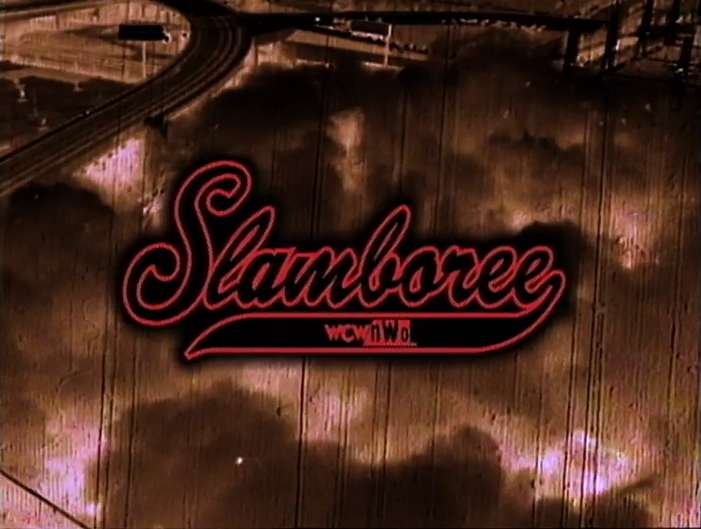 I took a “Finley stole me Lucky Charms!” sign to a Nitro in Evansville. Fit looked at it and yelled, and I quote “Arghhhh!”. So he’s my dude I guess. This was hard hitting as hell and Benoit takes another one of those chair shots/dives where you just cringe. If you like your wrestling to be a fight? This is the match for you. I dug it obviously. You gotta respect the WCW midcard.  1-1

Winner: Finley with the tombstone, helped slightly by a Booker t walk out distraction.

Man this crowd was in to Luger HUGE here. You know what I wasn’t in to? This boring ass match. It was supposed to be a grudge match but Luger kept stopping to flex and neither dude showed any intensity to make you believe. Oh yeah, Adams hit maybe the worst pile-driver ever in this thing. Blah. 1-2

Winner: Luger with the rack.

It was a battle royal man. The only difference is they went to the top more and nick patrick stayed in the ring for some reason. It did get way better towards the end though. They did some flips and shit you didn’t normally see in these for obvious reasons. Eh. 2-3 I’m feeling generous.

Winner: Ciclope wins after Juvy sacrifices himself. Ciclope then unmasks as Dean Malenko and the pop this got was enormous man. 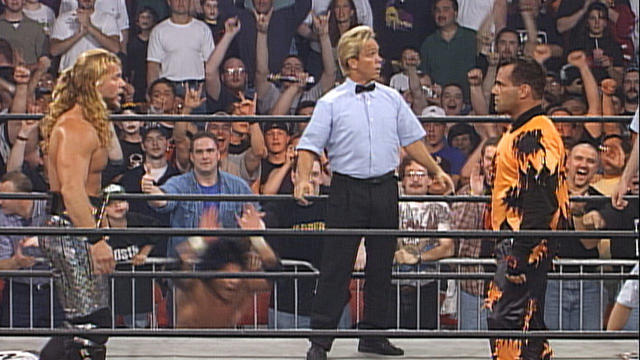 Chris almost pissed his pants and it was glorious. Malenko dominated the first few minutes giving Jericho a cathartic ass whipping where the crowd cheered his every move. Chris didn’t get any offense in until he manages a stun gun on a counter. Jericho constantly acting like he’s in shock helps this out. This was exactly what it needed to be from beginning to end. This was great. 3-4

Winner: Dean wins it via cloverleaf. Too bad he gets Dusty’d due to the Ciclope thing.

You win on a 10 count like last man standing. Tony “Ravens probably some rich kid who didn’t get what he wanted” spoiler bro, Tony was on it here. We get a shot of David Crockett. Neat. At one point DDP hangs him from the cage which might be a hate crime. Fun and violent. ECW chants and style for this entire thing. The ref gets bumped and the Flock arrives with bolt cutters. Recently excommunicated Van Hammer stops them with the stop sign. Riot squad is in now and it’s Boulder and Kidman. They attack DDP but eat cutters for their trouble. Raven catches page with a cutter out of nowhere but Page gets his own and both dudes were down. Hell of a match, these guys had mad chemistry. 4-5

Winner: Page after Raven can’t beat the 10 count off a Diamond Cutter.

If Dragon beats Eddie, Chavo gets released from Eddie’s control. Respect to WCW fans, this awesome ass match is going on and they focus on a fat hairy dude in the crowd taking his shirt off. This match fucked as the kids say. Two supremely talented dudes just going out there and tearing shit up just because they can. Chavo got too involved and it cost him, but man this match here. 5-6

Winner: Eddie after a frog splash.

Billy was 87-0 here. Too long and not as good as their previous match. A lot of walking around and too much selling from the guy that can’t do it. As a rule, if there is a rest hold in a Goldberg match it’s trash. I like Saturn but he’s not a miracle worker. 5-7

Winner: Goldberg via the usual.

This is ridiculous and I have no idea why this built to be a thing. Shockingly Vince doesn’t show. If he did he would have whooped that ass. Fuck this. Way to kill the numbers Eric. 5-8

Winner: Bischoff by “count out” and or forfeit.

Buffer still out here. “In black and purple The Hitman Bret….. he never finishes it. Worth the money there. 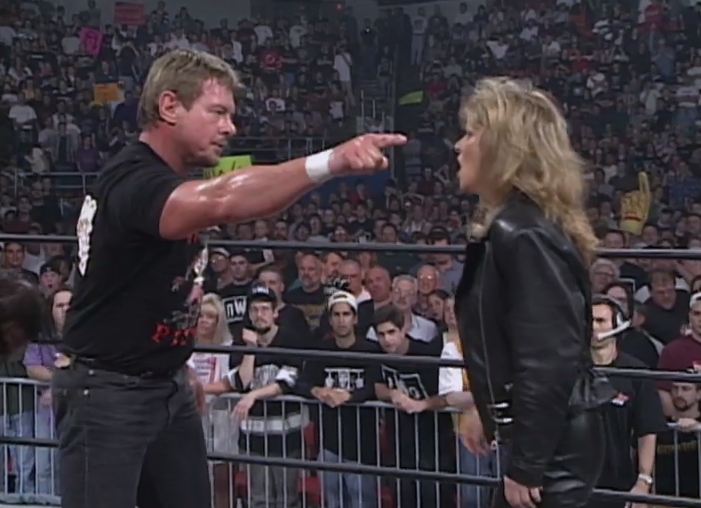 Bret helped cost Savage the belt since last month so he’s all mad and shit. This was a solid brawl. Ain’t no way these two were going to have a a bad match. Savages knees were shit and he was still out here doing the damn thing. WCW really fucked Bret up already though. Sad stuff. Liz runs down the aisle in desperate need of a sports bra and distracts Piper and me but for completely different reasons. Bret hits a low blow then attacks Piper for some reason. Savage gets Bret’s weapon but Hogan attacks his knee (the wrong one initially). Blah ending. Good match though 6-9.

Winner: Bret with the Sharpshooter. Piper found the object on Randy’s fist and set up there deal for the Bash because Piper doesn’t own a TV apparently. 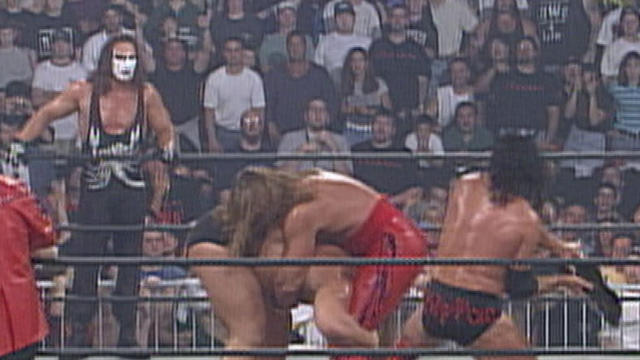 Giant had just joined nWo Hollywood and Hall had just returned from wherever. This is the second time giant went NWO at this point, there would be more. Poor dumbass sting is the only non NWO member out there. Not a bad tag match but it had an odd face vs heel vibe due to the Giant’s alignment. I’ll give it a point because of the Hall turn at the end that made zero sense but was a legit surprise at the time. 7-10

Winner: Giant pinned Nash after Hall turned and hit him with the belt. 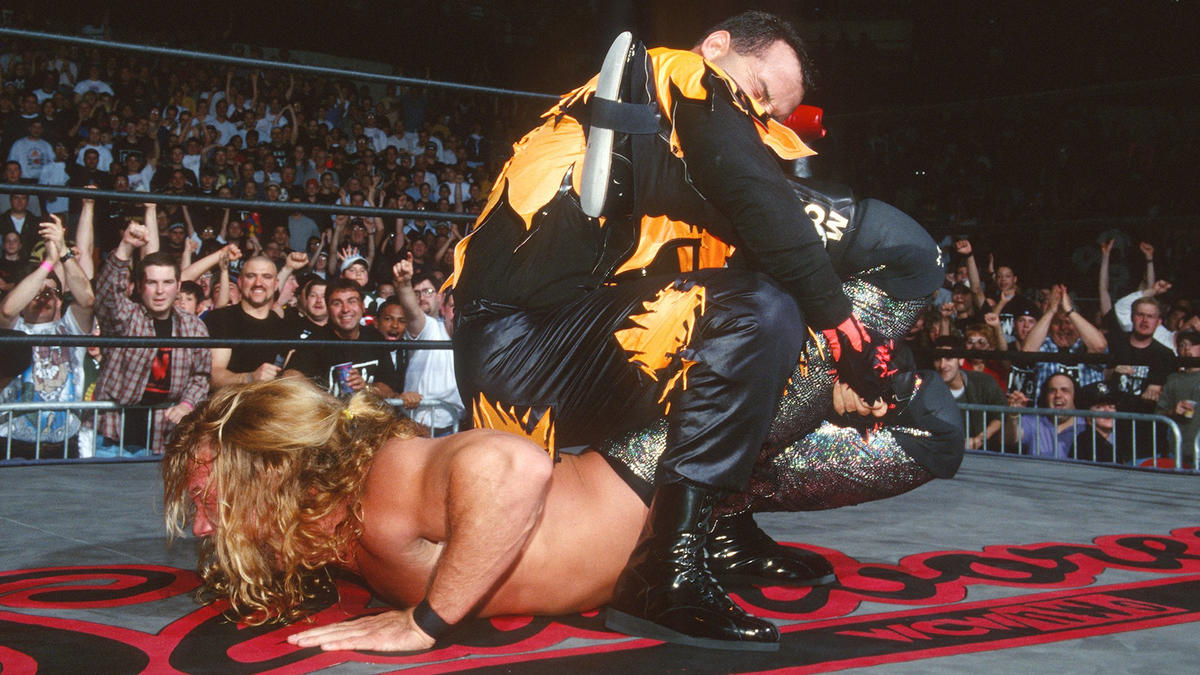 Overall Thoughts: This was pretty good. All kinds of shit went down that shocked the Hell out of me in 1998. The McMahon stuff was lame but what can you do? Hard to hate a show batting .700 isn’t it? Let’s see what the Bash has in store next show.