I’m going to go back through these and update some stuff since this is the weirdest Mania week ever. 1-5 anyway. Enjoy them. I know everyone is bored.

Commentators: “Gorilla” Monsoon, Jesse “The Body” Ventura and some guests.

It had to be hard to start the biggest show of all time but these guys did an admirable job. It wasn’t a super match but it was a decent way to start to the program. Muraco was huge as always and Orton is one of the most underappreciated guys WWE ever had. I always thought the Can Ams were way better than Strike Force and should have gotten the titles before this. Starting out with a good match is something they should have thought to do the previous year. 1-1

Winner: Martel pinned Muraco following a cross body and a trip by Zenk.

Billy surprising me by wearing a more pimp like jacket than Brain. I don’t want to accuse both guys of being on steroids but if they didn’t want me to they probably should have taken less steroids. This was very punchy kicky with some clotheslines thrown in for spice. Every couple of minutes one or the other went for their patented Full Nelson but neither could get it locked on fully. It wasn’t a good match or anything but if you were expecting one out of these two you were setting yourself up for disappointment anyway. It was fine for what it was and I am not wishing for death like I was during the previous years show. Still no point though 1-2.

Winner: Double count out. Both guys Brawling on the floor.

This has something for everyone! Do you hate the word midget? We have it! Do you hate racist caricatures? We have plenty! Hillbillies? You know it playboy! This match was hot garbage and still better than the Piper vs Mr. T boxing match from the previous year. In all honesty, Little Beaver was the one who kept starting shit with Bundy so he deserved the ass whipping. 1-3

Loser must bow to the winner: “King” Harley Race (w/ Moolah and The Brain) vs the Junkyard Dog

The Dog gets a mega pop on his way to the ring. Race did an awesome job this year bumping around for the Dog. Any time JYD would nail Race with anything he sold it like he was shot. I was really impressed with how much better he looked this year. The Dog was about normal but his popularity covered for a lot. 2-4 out of Harley love.

Winner: Harley got the pin after a nice Belly to Belly.

The Dream Team had been having some issues for a while and they were looking to turn Beefcake babyface so we get this match. It wasn’t memorable or long enough to be good or bad one way or the other. The real highlight of the contest was Heenan joining the commentary team to brag his ass off and declare victory in the main event. 2-5

This was an awesome set up with Adrian’s “Flower Shop” taking over “Piper’s Pit” while he was out and continued to be awesome from there. This was also billed as the retirement match for Piper so it had big time stakes. The match itself was just OK as far as matches go but the stakes surrounding it elevated it. Adonis actually had the match won but released the Sleeper too early allowing newly babyfaced Brutus Beefcake to wake up Piper. After being awakened, Piper was able to lock on a sleeper of his own for one final victory. He never came back ever and lived a long and peaceful life away from pro wrestling. (Checks notes) Shit. Still great moment. 3-6

Winner: Piper put Adrian out with the Sleeper.

The Hart Foundation (Jim Neidhart/Bret Hart)/Danny Davis (w/ Jimmy Hart) vs The British Bulldogs (Davy Boy Smith/Dynamite Kid)/Tito Santana (w/ Matilda) (until Jesse carries her to the back on one of those awesome ring carts, it was ridiculous)

The Harts were tag champions coming in. Danny was banned for life plus ten years for his awful refereeing and had screwed over the entire baby face side before this. He was due for an ass whipping. Really solid tag match with everybody working hard and being where they needed to be. Even the ending was awesome and set up further beatings for Danny. The commentary was a little off, as Mary Hart is no Susan St. James in the booth. 4-7

Winner: Davis nailed Davy with a megaphone for the cheap pin.

Other than Jesse making racist “Buckwheat” jokes about Koko this was an OK but unmemorable. At this point they were just trying to get everyone on the show and fill time so this was just a match. Both guys are talented but they didn’t have a lot to work with out there. 4-8

Winner: Reed rolls through off a Koko cross body and holds the tights for the pin.

FINE. Do you really need me to tell you that this is one of (if not THE) greatest matches of all time? From the build up, to the execution, this is one of the finest exhibitions of wrestling you are ever going to see. Both men were at the tops of their respective games here and brought everything they had to this battle. The fact that they had every single idiosyncrasy planned out in advance did nothing to hurt the overall flow or presentation of this amazing encounter. This is the type of match that makes wrestling fans for life. If for some reason you haven’t seen it I’d suggest you do so immediately. Also I’m curious as to why you are reading some random assholes blog about wrestling if you have never seen something this historical. I mean, I appreciate it but it’s kinda weird. Highest possible praise I can give. One of the best things wrestling has ever produced from top to bottom. I miss the Macho Man and Liz. 5-9

Winner: Steamboat gets the small package as a counter to a Savage slam.

The Honky Tonk Man is one of the greatest heels of all time but the wrestling part of the job was never his strong point. Jake was fine but he wasn’t able to care Honky to a very good match. It wasn’t terrible but other than Jake’s awesome punches and Jimmy being an annoying little shit this didn’t have a lot going for it. 5-10

Winner: Honky pins Jake with a roll up while holding the ropes.

Eh, it was a match. These are two of my least favorite teams of all time so they could be doing a Young Bucks match and I wouldn’t care. It was fine and dumb ass Duggan costing the Bees the match would cause a Bees heel turn any time after 2000. We were really just wasting time until the main event. 5-11

Winner: The Bees were disqualified when  Duggan nailed Sheik with the 2×4.

This was the biggest single match in the history of professional wrestling. There have been big matches before and after but none have been able to touch the importance of this one. The match itself is nothing, Andre was hurt and Hogan wasn’t going to be able to carry him. It didn’t matter one bit to anyone that watched it. The crowd was in the palms of their hands and this match made ALL THE MONEY. What a moment and one of the few times where even though it wasn’t a good match it delivered anyway. 7 year old me still loves this match. Yeah, I’m giving it a point for history. 6-12

Winner: Hogan gets the pin after a body slam and leg drop. 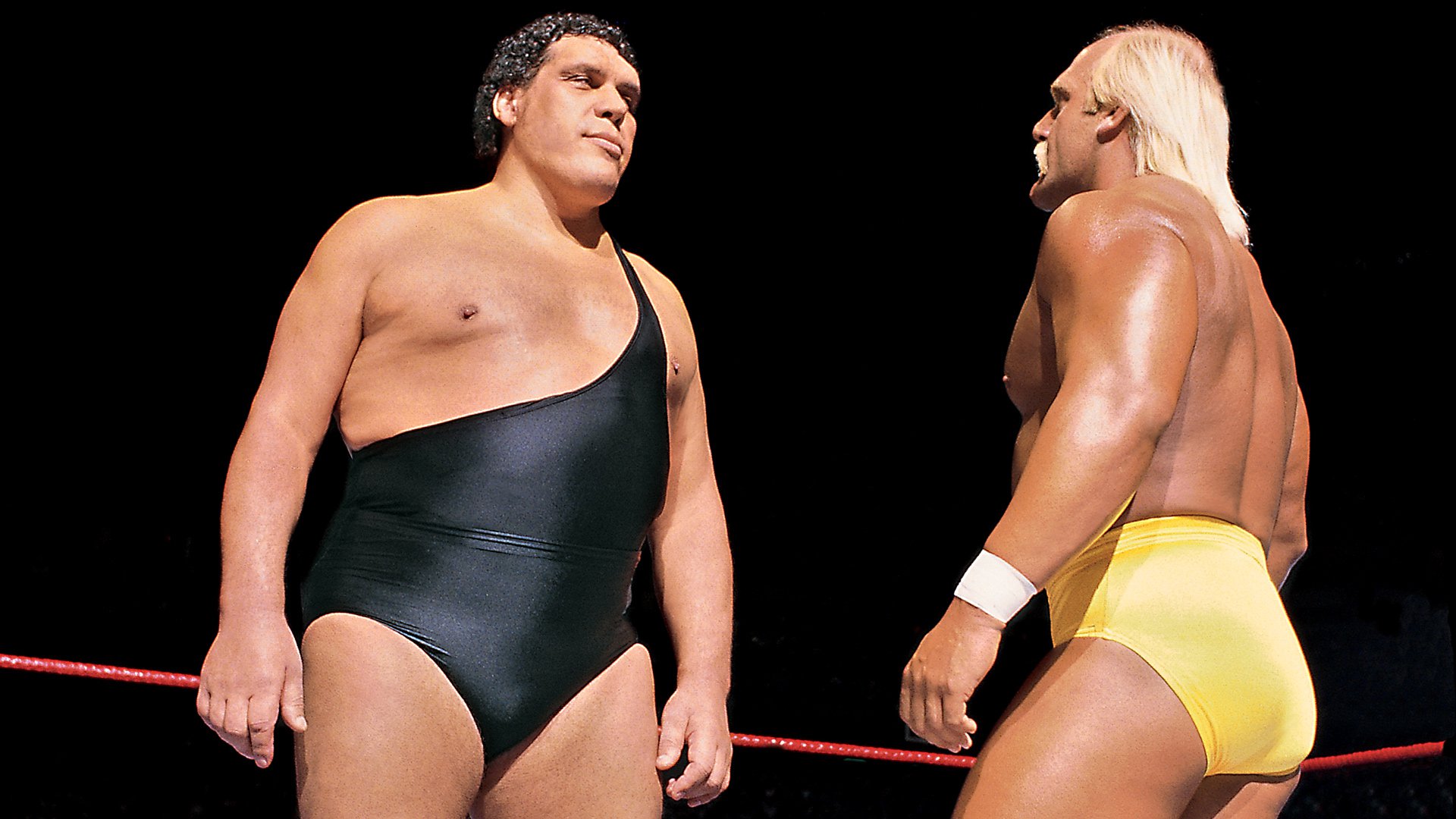 Overall Thoughts: This was the biggest event in professional wrestling history. I’m not sure I can put enough emphasis on how much this event meant to the history of the sport. As great as a match as Savage vs Steamboat was you have to give the entire credit for the huge crowd to Hogan and Andre. If you’ve never seen this show take a look at it, it’s not the best in ring wise but the historical significance will draw you in and keep you there. More importantly than my opinion, this thing saved the WrestleMania franchise because 2 was shit and this turned it the hell around in a big way. So in conclusion FUCK WRESTLEMANIA 2.