I’m going to go back through these and update some stuff since this is the weirdest Mania week ever. 1-5 anyway. Enjoy them. I know everyone is bored. 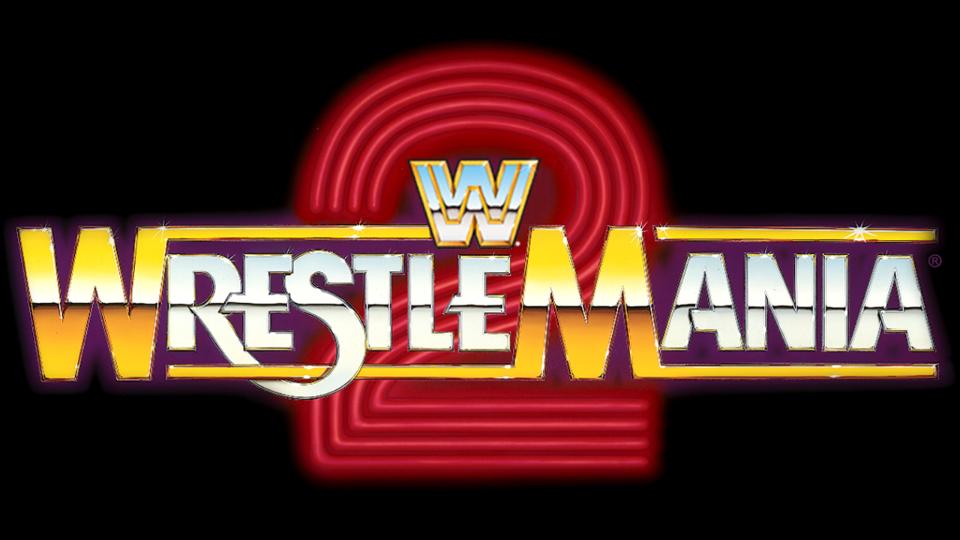 Los Angeles, California (Yep, 3 locations and the ideas only get worse.)

-We start off in New York

What a way to start what was supposed to be the second biggest event in wrestling history. All we got was a short brawl that ended up on the floor for a count out. Both athletes looked great but didn’t deliver shit in the ring, and I personally like both guys. The crowd chanting “bullshit” on your first match is never usually a good sign. What a hot start Vince. 0-1 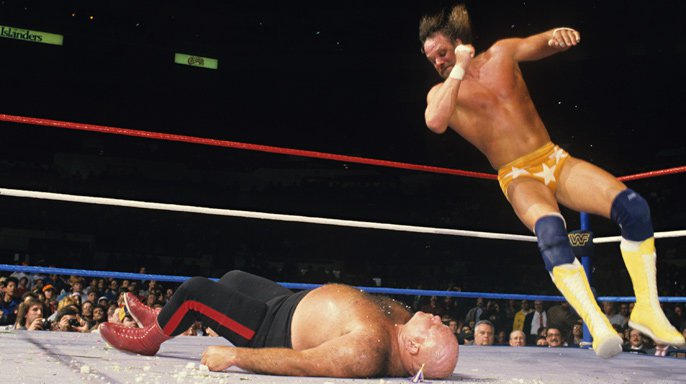 I was giving her shit earlier, but Susan at least seems to get the story of the matches and what they are trying to get over… looking at you Raw announce team. The crowd is hot for this and sadly all they got out of it was a lot of running away from Savage. Run, cheap shot the moron, rinse and repeat. Savage had to be livid with the quality of this garbage.  The Animal even got to kick out of the big elbow which is blasphemy of the highest order. On a positive note this match had an actual winner. We have had 2 matches and they both sucked ass. 0-2

Winner: Savage got the pin with both feet on the ropes.

Jake takes a couple of nice bumps for Wells early on but this really didn’t have any time to develop or tell a story. Luckily this was quick and mostly painless, and Jake’s DDT was always a thing of beauty. Oh, the match was still garbage, but it was FAST garbage, and we got to see a snake. 0-3

Winner: Jake with the DDT for the pin. 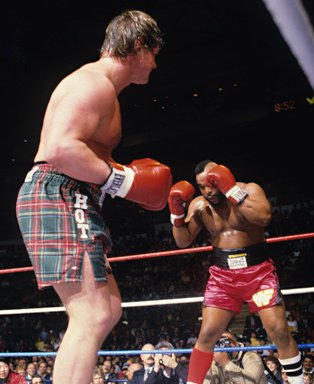 If Roddy wasn’t public enemy number 1 in the 1980’s then this would have had zero point. That being said, it still had zero point, Piper got cheered for half of this mess. Two men that should have at least been halfway decent at faking a punch put on the worst exhibition of “boxing” I have ever seen. I don’t know if they though they could just wing it without practice or just didn’t give a shit. It was god damned awful. The worst part about it was that this was supposed to be the MAIN EVENT of the New York part of the program. It’s been a while since I watched this show but it is an atrocity. This needs some serious help to avoid the worst WrestleMania moniker. 0-4

Winner: Mr. T by DQ when Piper bodyslams him.

Have you ever wanted to see your Mammaw fight another lady at Walmart in bathing suits? It honestly, without any hyperbole whatsoever that would be better than this one minute piece of dog shit. This show has taken me a week to re-watch and it is all because of the general lack of quality in every single part of this production. I have no idea how they made it to WrestleMania 3 after this abortion. My notes for this match just said, verbatim “God Fucking Awful!!!!”. Only (checks notes…cries) 7 more matches to go! 0-5

Winner: Moolah got the pin after a missed second rope splash from Velvet.

When I was eight or nine years old I was playing on a merry go round when some older kids decided to push it as fast as they could. Us being smaller we were just happy that they were making an effort so we stayed on thinking that it would be fun to go really fast. Well when they got that bastard up to like 55 miles per hour my grip slipped and I fell ribs first into one of those spinning bars and knocked the wind out of myself. Also while that fun bit of action was happening I was being dragged by the damn thing until it stopped. That was not only a more fun experience than this match, it also didn’t make me want to root for the Soviets. I award this crap no points, and may God have mercy on it’s soul. Fuck WrestleMania 2. 0-6

Winner: Corporal gets the win after hitting Volkoff with a cane. 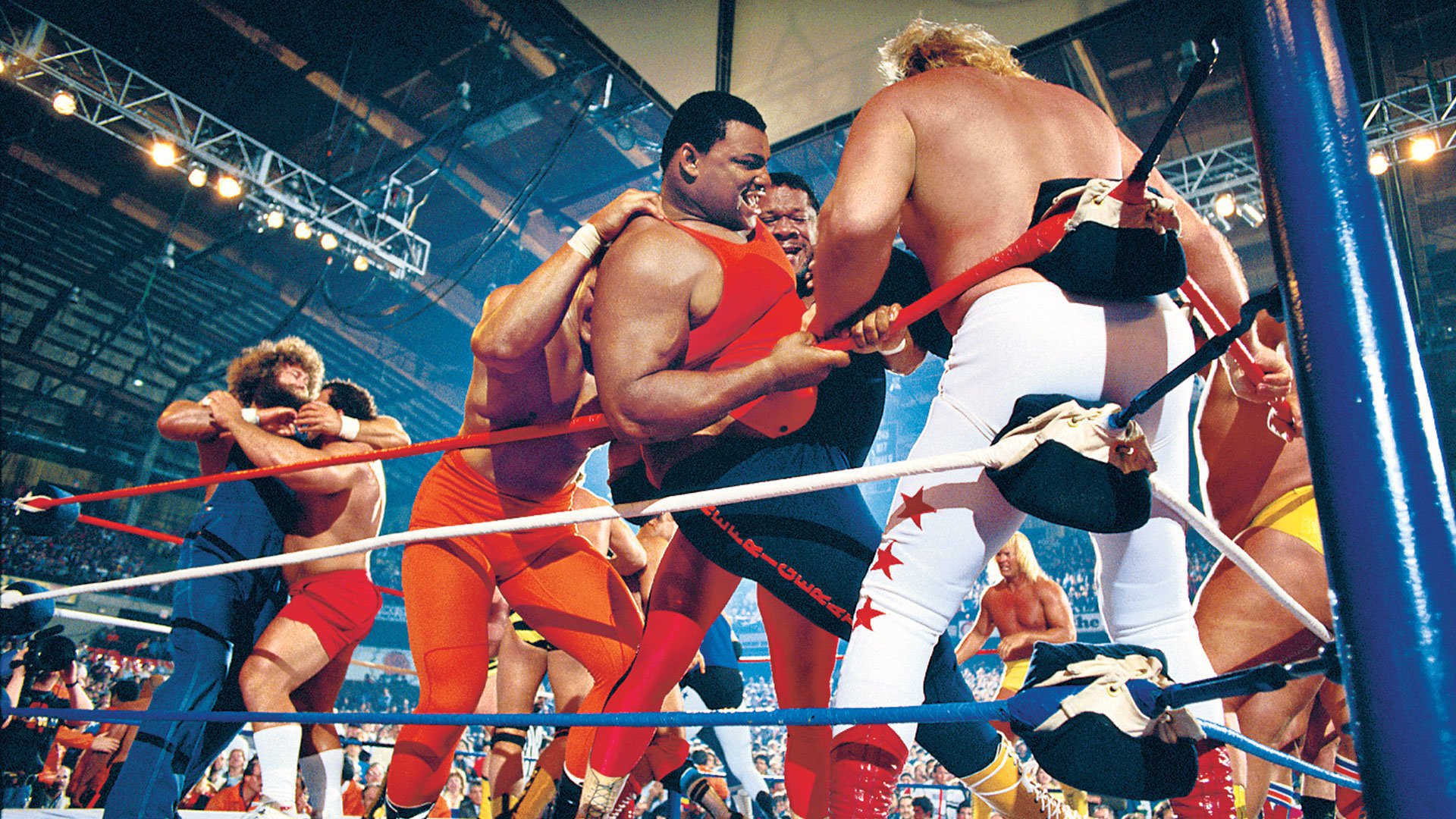 This was every single Battle Royal you have ever seen, except worse because half the competitors have never been in a ring before. Andre winning was a no brainer but in no way was a lousy Battle Royal going to save this shit. I feel worse and worse about being a wrestling fan after every match. 0-7

Winner: Andre by lastly eliminating Bret by tossing him on to the Anvil.

We finally have a decent match only 26 hours into the show. It wasn’t spectacular but it was a well planned out and executed tag match. Beefcake in particular didn’t look as bad as he usually did during this period and the rest of the guys did just fine. The bump that Kid took in the last sequence was brutal, he never got back in the ring to celebrate winning the match. Not sure if that was planned that way or if he took an awkward bump. These guys are my heroes for not stinking up the joint and I finally have a small ray of sunshine in the darkness that is this show. 1-8

-Finally we head to L.A. for our last portion of the show.

Both guys looked like they were in incredible shape and worked an OK match. The bad part is even an average match like this stands out in the mountain of shit that surrounds it. This was about as good as you are going to get out of Hercules and both guys deserve credit for not following the night’s trend of making me want to watch Golden Girls instead. Two decent matches in a row is a miracle for this show. 2-9

Winner: Ricky gets the win after a top rope bodypress.

Adrian was in full “Adorable” mode here and the 1980’s don’t let me down by IMMEDIATELY starting a “Faggot” chant. Why were we such terrible people then (and now TBH)? Adrian as always was a bumping machine but Elmer (Who was wearing a brand new red polo shirt under his overalls…an odd fashion choice for a hillbilly) is the dirt worst. We fall back into junk territory with this one, Adrian tried but he wasn’t a miracle worker. 2-10

Winner: Adrian gets the pin after a top rope forearm.

I noticed one of the security people walking the wrestlers to the ring looked like one of Dalton’s bouncers from Roadhouse and it totally was. With two people from Roadhouse near a match I can’t be mad at it. This was a fun, house show like, tag match that didn’t break any new ground or anything but was at least entertaining. Terry’s crazy ass made Dory more interesting. Dory was technically great as always. JYD and Tito were over enough that the fans stayed into it. Another decent match makes me happy. 3-11

Winner: Terry gets the pin after a shot with the megaphone on JYD.

This was a perfectly acceptable 1980’s Hulk Hogan main event match. Hogan and his taped ribs played all the hits and kept the crowd excited throughout. Bundy did a great job convincing the crowd that he had a hope in Hell of actually walking out with the title. If this main evented any other show I’d be just fine. Sadly, this show needed saving in a big way and they just couldn’t deliver with the talent involved. 3-12 because they needed to save this and totally did not. 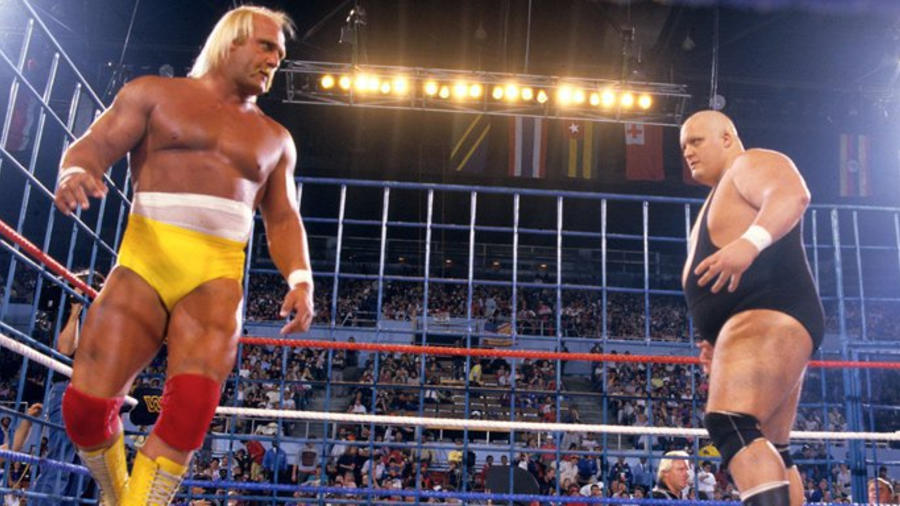 Overall Thoughts: This show was a piece of garbage. The pacing, poor matches, bad commentary, lighting issues and a plethora of other amateurish problems place this as not only one of the worst WrestleManias ever but one of the worst shows I’ve seen PERIOD (Non- Heroes of Wrestling Division). Now that I’ve got this review in the can I am happy to announce that I will never watch this crap ever again. Sorry for the negativity but i’m supposed to LIKE wrestling and this one really took it out of me.