Hey, is this the one where the nWo does stuff?

Huge Eddie sucks chant. As I stop to admire Eddie’s mullet and I find myself SHOCKED that referee Nick Patrick cut his off. Leave the memories alone Nick. The narrative has always been that WCW didn’t make new stars but this push of Booker in 98 really proves that wrong. Another good showing from Book again this month with another great dance partner in Eddie. Great way to kick off a show. 1-1

Winner: Booker with a missile dropkick.

Apparently Konnan called Juvy a quitter for losing his mask (I mean he did) so we got this. It started out pretty quick and then Konnan started busting out submissions and bringing the pace way down. The brother looked blown as hell for the last five minutes. It was what it was. Konan wasn’t ever anything special after the NWO formed as an in ring guy.  1-2

Winner: Juvy with a crucifix.

This is easily one of my favorite WCW feuds and this match lives up to it. These two couldn’t be less alike in personality and yet so similar in ring style. They knew each other so well that they couldn’t help but have a great match. The best thing is this feud only gets better. This is what WCW was best at, filling up shows with good wrestlers and just letting them go. Well, in the mid-card anyway. Top notch 2-3.

Things have changed since last show. Steiner looks closer to Big Poppa Pump and Lex’s ribs have healed since last month. This was actually better than I expected and didn’t over stay it’s welcome. So that is a bonus because I looked at this on paper and thought it was certainly going to be trash. Scotty got frustrated, tried to cheat and it cost him. Good story and not a bad match for what it was. 3-4

Winner: Lex after a forearm shot while Scott was distracted by Rick in the aisle.

This is the third straight month a combination of these three dudes are wrestling and I ain’t hating it. This was my favorite match of 98 WCW so far. Like a serious match of the year candidate for WCW. They beat the living shit out of one another for my amusement and I am about it. Hot fire from start to finish. I love this weird ass feud. God bless DDP for realizing that putting himself into this would make him look great. Shit worked. 4-5

Winner: DDP retains via a Diamond Cutter off the top through (Sort of, table didn’t cooperate well) a table on Raven.

This of course is the rematch from January. Giant comes out with a neck brace on. Nash of course bails and mocks that by scratching his neck. Honestly this wasn’t very good at Souled Out when both guys were “healthy” so Giant laying around for 7 minutes while Big Sexy slowly beat on him did nothing for me here. The garbage ending didn’t help either. 4-6

Winner: The Giant got the win by DQ when Brian Adams attacked with a bat. Obviously had it been the singer then I would have given this a point.

These two had some of my favorite matches of all time together before this. This was another good one in that series. The really only downfall was the ref’s inability to see the ninja like 260 lb Rick Rude jump in the ring right in front of his face. Other than that though just a really solid technical match that had a good flow and story. It wasn’t an all time great like some of their matches but it was really good. To tell the truth I can’t imagine a bad match with these guys. Having Rick out there really added to it as well. Pro’s. 5-7

Winner: Bret gets the win with the Sharpshooter right before Rude attacks.

Of course the World Title has to play second fiddle to the always fresh Hogan/Savage feud. Hall of course get the shot because he won World War 3 and Sting is champ because Hulk Hogan allowed it after making himself look good in two consecutive matches. Other than Scott Hall’s habit of doing some goofy ass selling this wasn’t too awful bad. It kept me entertained anyway. It was a World title match match with the NWO involved so of course their was a ref bump. Luckily it was Mark Curtis who fucking ruled. Sting was able to overcome the shenanigans and make the crowd happy though. Good enough 6-8.

Winner: Sting retains after a Deathdrop.

Holy crap. Hogan came out first? I’ll be damned. I also want to point out 1998 Liz one more time. Jeeze. This is for the unofficial “Leader of the NWO” title and since it’s NWO it had to be the main. So do you like punches and chokes? This is for you then. I really wanted to like this for Macho but just couldn’t get into it. This had the star power bur none of what makes me love this shit. Both guys did bleed though so there is that. Didn’t help it enough to earn it a point though, especially with that downer ass ending. 6-9

Winner: Nobody. The Disciple came in to save Hogan and killed the ref but Sting evened the odds for Savage from the rafters. But since it’s Sting he turns his back and gets killed by Savage. Savage’s crazy ass then spits on Hogan and they get into a shouting match before he leaves. 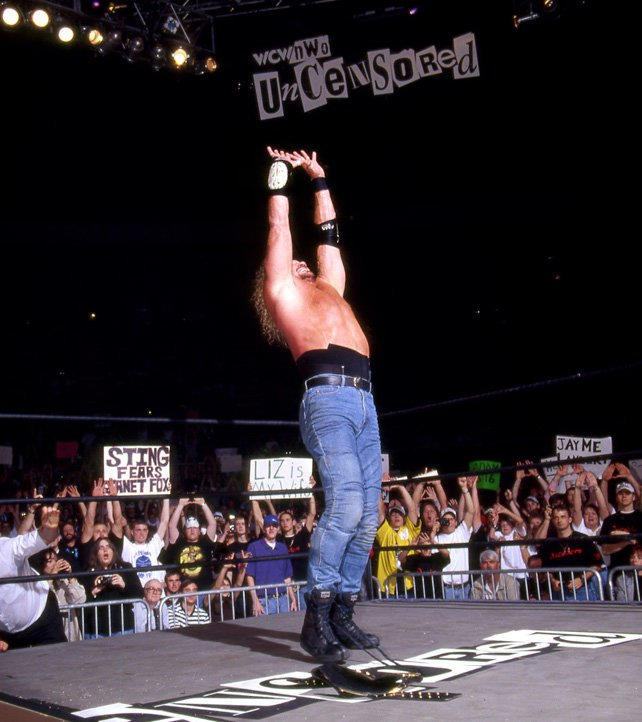 Overall Thoughts: The main event was disappointing and anything Konnan was associated with blew but the rest of the show was just fine. I remember liking Spring Stampede originally so hopefully they keep this streak alive.