Well the championship/contender roles are reversed this month. Winner takes on Saturn later in the show (not much later as we find out). This was a lot faster paced than the previous month at Souled Out. The match fucked as the kids say. Any awkwardness they had the previous month is completely gone here. Unfortunately this was the match where Martel’s return to the big time was put to an end as he suffered a career ending knee injury in this. Kind of sad but a really good match to go out on. 1 -1

Winner: Booker regained the belt with a sidekick.

Booker was really proving why he was getting his push at this point. Really good shit. Both these guys did a great job in this but you have to give respect to Book for pulling two great ones off back to back like this. I always enjoyed Saturn’s style and I’m glad the Network exists so I can go back and watch shit that I may not have appreciated when I was a kid. 2-2

Couple of timing issues up front but this was way more intense than you would think for a match based solely on dance moves. Both guys went hard early but then it slowed down a bit. They tried to convince us on commentary that this was a blood feud but the crowd only really popped for the dancing. I wanted to like this but it drug on too long for me. 2-3

Winner: Disco takes it after La Parka takes a weak ass bump into a chair followed by the Chart Buster.

Brad ruled but he definitely drew the short straw here. The G-man was still being BILLed (sorry) with his full name. Remember when he could actually do his moves? Good times. This gets a point because Brad ruled. 3-4

Again with the WWE music. Just let him use the old ripoff stuff so the crowd noise sounds right. Chris was a legend here. Jericho starts the match with the belt on until he gets kicked in it and acts like it killed him. He then tries to play possum on the floor but got caught. Cruiserweight title matches as a rule are awesome and this is no exception. Poor Juvy thought he had the thing won at one point because the bell ringer is a dumb fuck. They honestly should have done the finish out of that but whatever. Too bad for the Juice I guess. 4-5

Davey always looked out of place in this WCW run. He also got jack shit of offense in the match until Mongo hit the post like a moron. Mongo should not be the person tasked with keeping a match entertaining ever. Poor Davey was not the guy to carry him to anything watchable either. This was a bucket of trash. 4-6

Winner: Davey via an armbar.

DDP’s fake music blows and kills his entrance pop. I hate to keep harping on the music but it hurts the aura of the match a bit. This was a great ass contest. Both guys were at the peak of their abilities and showed out here. No gimmicks just a solid old school fight and I loved the shit out of it then and now. I really wish I could enjoy Benoit matches but they still make me uncomfortable at times. Still no matter my feelings I can’t deny how great this was. 5-7

Winner: DDP retains with the cutter.

Hard to believe this was the main event last month. Luger comes out with the DDP memorial rib tape. That’s the story of the match as well. Savage works Lex over big time in the ring and on the floor. Your enjoyment of this match may depend on how much you like Lex Luger doing his Hulk Hogan get beat up/then no sell impression. Savage literally beats his ass the entire match and then Luger just decides, well it’s time to win now. The NWO run in didn’t help things to be honest. Not as good as last month. 5-8

Winner: Luger gets the win with the Rack after the bell rings and Liz and the NWO interfere. That’s what Savage gets for helping him fight the NWO I guess?

This was more storyline than anything else. Rick beats up Hall and Nash for a minute and then Scotty turns on him. One of the more memorable turns in history that gave us all awesome heel Scott (after the whole White Thunder deal). Rick tried to fight back after the turn for a sec but he was boned. 6-9 just for the turn.

Winner: New Champs after an Outsider Edge to Rick.

No Jimi Hendrix so I’m sad. THE BIGGEST REMATCH IN THE HISTORY OF OUR SPORT. At this point Tony may have been right. Once again Hogan dominates the first portion of the match because they apparently learned jack shit from Starrcade. Hogan kicks his ass for like 10 minutes before Sting finally gets some offense in. Once he does Hogan bails and I crack up a little at that. Actually not a bad match going on and of course since it’s a NWO match the ref gets bumped so that shenanigans can occur.Nick Patrick’s Kenny Powers looking ass arrives as replacement ref but doesn’t count fast enough for Hogan. They bicker back and forth as Hogan looks shocked. Like really though, why would he be mad? Sting has looked like a complete wuss again. Good job WCW. He finally starts no selling and of course that gives us our second ref bump. Sting then fights off the entire NWO while Savage nails Hogan with a can of spray paint. Finally WCW gets a somewhat happy ending even if they did try to fuck it up again. 7-10 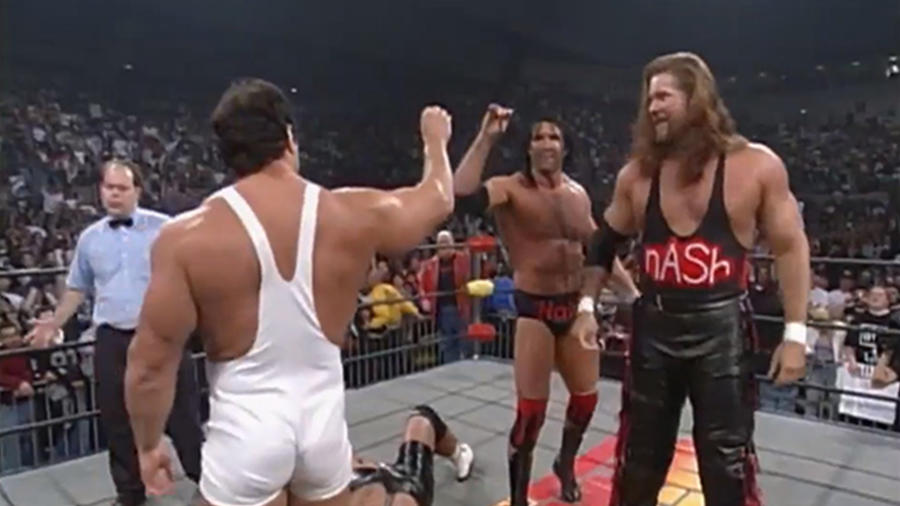 Overall Thoughts: Hey it’s a WCW show that ended with a happy ending during the NWO era. That’s two in a row by the way. Not a bad show and everything from top to bottom was at least passable. I guess I’ll be back soon with Uncensored.

One thought on “WCW/nWo Superbrawl VIII”