You knew that video was coming. 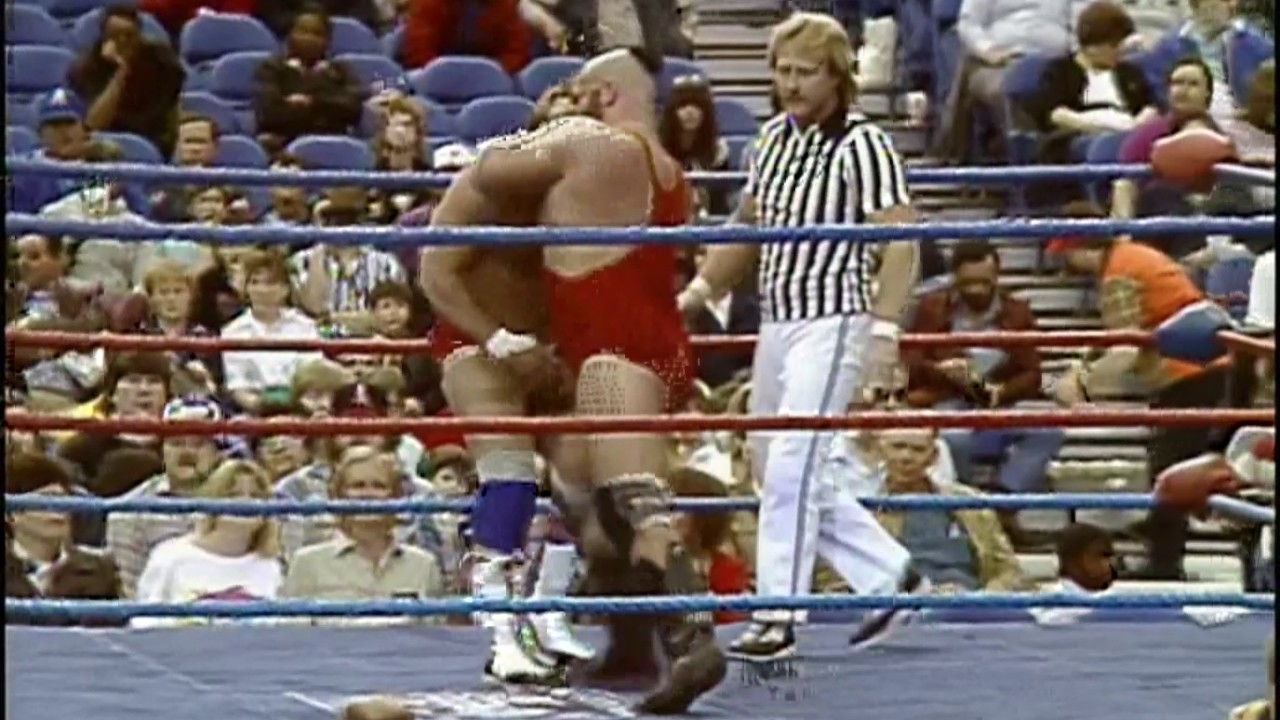 Well this was certainly not what I would start a show with. Boris was never what I would call a skilled wrestler and the charisma vacuum that was Brad sure wasn’t going to carry him to anything special. This was as bland as a knockoff version of corn flakes…with no sugar…after they went stale.

Winner: Brad got the pin after a sort of powerslam.

Well this is certainly not…wait I used that joke. It’s a midget match so…eh. If I had that many empty seats I damn sure wouldn’t be showing the crowd as much as they do. Little Mr. T is at least over. There was a very specific time in the 1980’s where having a midget Mr. T would work. This took almost literally forever. I don’t want to question the booking of Verne Gagne but maybe drop the comedy little people match from an already 4 hour show? The referee gets attacked by all 4 guys in a spot that I’m sure Vince McMahon would find hilarious. Me not so much.

Winners: Lang/T get the win after a rollup by Lang on Littlebrook.

Lars Sullivan was probably a big DeBeers fan since they mention his white supremacy gimmick right off. What a dick. Wahoo gets a little fancy with a wristlock take down but not much is going on. Punch,kick,chop, repeat. Wahoo takes a nice bump getting dumped to the floor though. They have to stop showing shots of this crowd. Looks awful. Also awful? This match.

Winner: Colonel DeBeers gets the DQ win after Wahoo chucks him over the top rope like a moron.

I hope Misawa messes this fool up. Buck says “Rock & Roll!” a lot for a mother fucker dressed like Elvis in 1986. At least Honky Tonk Man did it ironically, this pedophile piece of crap thought he was cool. He then spends a bit of time working the knee. I guess he had practice keeping people from running (if you thought I was going to let him being the world’s biggest POS go you may want to move on). Shockingly this was 10 times better with TM in command. Buck tries to go for the mask in a match that was purely scientific up to this point. HOW DID PEOPLE CHEER THIS CRIMINAL FUCK? Tiger killing him with a Plancha makes me happy. Yeah jerks, keep cheering the creepy looking fuck instead of the good wrestler in the mask. I wish that this wasn’t the best match on the card so far.

Winner: Tiger gets the pin after a somersault off the top. 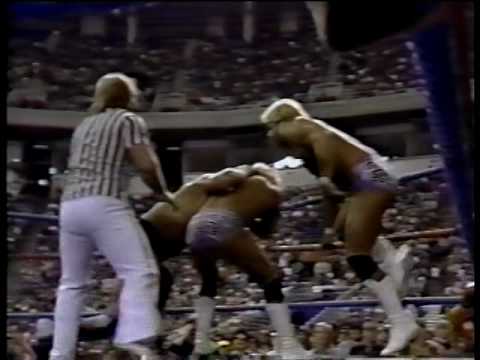 Barry Windham & Mike Rotundo vs The Fabulous Ones

I guess we are going with the Rotundo instead of Rotunda tonight. Also the announcer pronounces it WindHAM and makes me spit my beer a bit. Man I want to see 1986 Windham against Tiger Mask right NOW. Some random asshole is shouting instructions from the floor until a cop gently guides him away from the ring. There is like zero security presence around ringside. This is really good compared to the stuff in front of it but I expected better out of these 2 teams. Barry is a bad mofo though. I really wanted to like this more than I did.

Winner: The US Express got the win after Barry got an illegal pin after a top rope elbow. 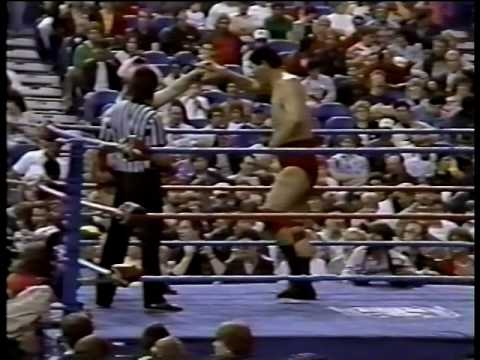 Baba always impressed me. The fact that a guy who was built like a 60 year alcoholic, but taller, was able to stay as over as he was is a testament to…something I guess. My lord this is not good. Kinda makes me wish for the opener. Like, this takes forever man. Baba may be one of the least believable athletes on this show. Brown is just regular awful. It makes me hurt to watch this garbage. The fact that they gave it almost 10 minutes is ridiculous.

Winner: Baba wins with what can only the most generous person would call a big boot.

This is nothing that is going to blow anyone away but it is solid. Both of these dudes know exactly what it takes to make a wrestling match at the very least decent. Race would be in WWE not long after this and Martel would follow soon after if I remember correctly. Old Harley was starting to hit the downslide of his career (work wise) but was still good. Rick had one his one world title already but still had some life left after this. Harley was still able to pull off mean bastard just as well as anyone in the world, especially against a pretty boy like Rick. This was fine for what it was I guess.

Winner: No one, double count out. 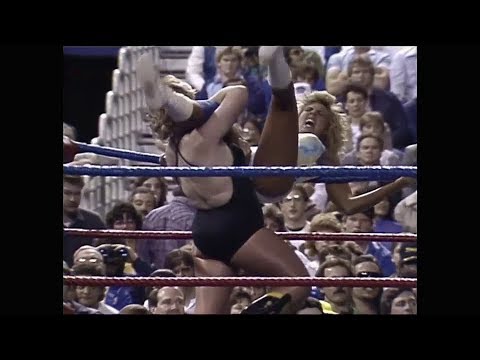 Luna was crazy before crazy was cool man. She looks 20 years ahead of her time. Meanwhile Sherri was the MAN. This was what you would expect it to be. They called Luna, Leona Vachon the entire match though. Unless you really are a Sherri completest I’d say you could safely skip this.

Winner: Sherri dumps Debbie Combs after she thought she won.

Sarge comes out with tiny American flags so you know he’s the good guy. Kamala is in a confusing spot because he doesn’t know how to make a pinfall but he’s smart enough to cheat only behind the ref’s back. This was better than I expected but that isn’t saying much. Sarge was over like rover and the crowd was into it so I guess it could have been worse. Still like…really bad though.

Winner: Sarge by DQ because Akbar and Kamala are dumb.

I enjoyed this a lot. Hennig and Hall worked really well together and I was shocked how much I liked the Irwin boys as a team. What I didn’t like was the announcers calling Scott Irwin “HOG” every five seconds. The fact is is this thing had five more minutes or so I would have probably moved it into the great category. As it stands it was merely good, which ain’t bad if you are keeping score.

Winner: The champs got the win after a Missile Dropkick from Curt.

This was scheduled for 10-2 minute rounds and both guys have karate gloves on. I’ll say this, it could have been way worse. LeDoux was garbage with everything except throwing punches and Larry carried him well enough. Hell Larry din’t even do his usual 20 minutes of stalling before the match. You have to consider that a win. I want to point out that Larry Hennig was the ref and looked like he could still murder both dudes at his advanced age.

Winner: LeDoux got the win in round 5 by DQ. 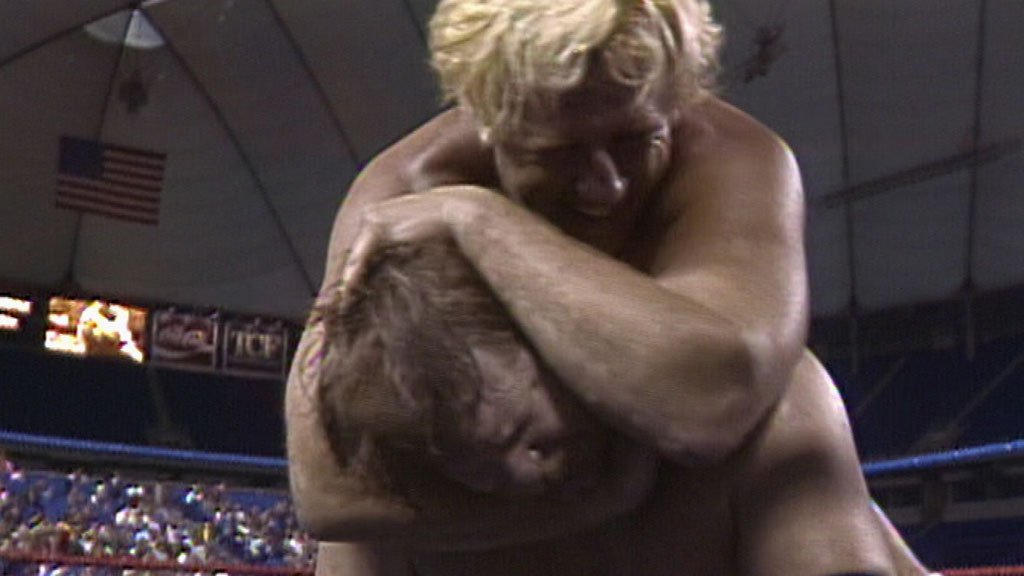 Basic, solid and old school as hell. Good stuff. Bock is an underappreciated talent in this day and age and Hansen was a brute. Not entirely sure the ref bump was necessary to the story since Stan kept kicking the hell out and not giving Nick a visual pin. I guess that’s what Nick gets for kicking out at one a bunch of times in this. The bullshit ending didn’t really do this one any service. No smarky comments from me. Two legends doing the deal. In retrospect I bet Verne wished he never put the belt on Stan.

Winner: Nick got the win after being backdropped over the top by Hansen. 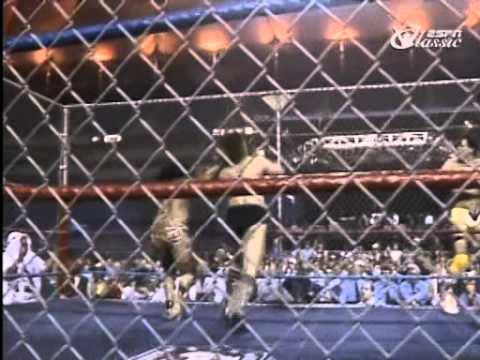 Snuka was replacing Jerry Blackwell in this. He probably had a food related injury. If Snuka and Greg won Verne got to bore the crowd the Sheik for 10 minutes. Man, how much did Nord want to be Brody? The brother was one wig away from full cosplay. They announce this as the main event during the intros but I could only be so lucky. Hyperbole rules the commentary booth “Gagne can go 100 miles per hour faster than his opponents and Snuka can fly 20,000 feet in the air”,sure they can dipshit. These two monsters selling for Greg’s skinny ass is believable as Sasha Banks choke slamming Braun Strowman. Except for Sasha is talented. Honestly, Brody’s dropkick at the end was the nicest move of the entire match. I guess I can sum this up by saying…I hate Greg Gagne.

Verne’s cheating ass jumps Kassey outside the ring and rams him into the cage. Sheik blades 5 seconds in because I guess Verne paid well. Usually this would just be an ass kicking by the good guy but instead it was just a normal type of match by two guys way too old to make it interesting. Plus Verne looks like a chicken shit asking for ten minutes and then taking the inside cradle pin as soon as he is in any trouble. My god let this show end.

Winner: The Owner of the Company via a small package. SHOCKED I tell you!

We don’t even get the entrances for this and I’m guessing that would be the good part. Looks like Officer Rod Farva is the special guest referee. I don’t want to SAY that the Road Warriors were on every available steroid but… maybe? This was what it was, just too long. A quick jump over to Wikipedia shows me that they actually cut like 15 minutes off this piece of shit. As a main event goes this was a dumpster fire and bad idea to end a show with it.

Winner: The Warriors got the pin after Hayes nailed Garvin with knux by mistake. 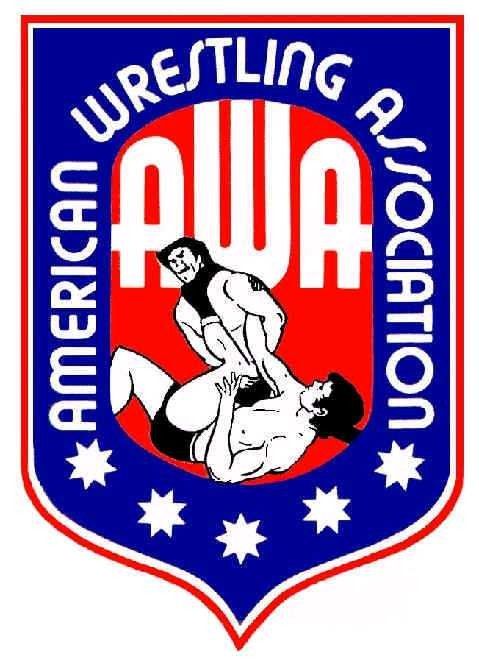 Overall Thoughts:  Too long, too boring and not one thing really stood out as memorable. There was a couple of alright matches buried in there just not enough for you to sit through four hours to get to it. I hope the AWA gets back into business and then goes out again as punishment for this crap.