When I was a kid my mom worked in a video store and this was one of the shows she always got me because I asked for it constantly. The packaging was awesome and the show was always fun. Now that I’m old and bitter let’s see how it holds up. 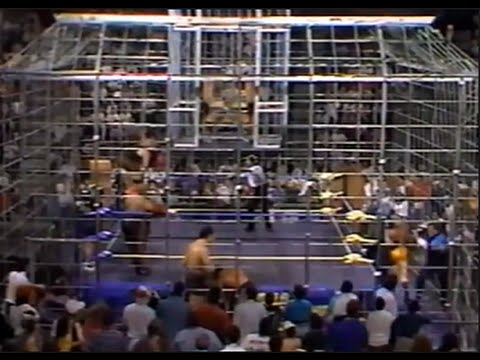 Chamber of Horrors: El Gigante, (US Champion) Sting and the Steiner Brothers vs Abdullah the Butcher, The Diamond Studd, Cactus Jack and Big Van Vader

Why in the name of all that is holy would you start a PPV with match like this? I loved Vader’s mask. Not sure why Cactus had a chainsaw… but whatever I guess. I love that they keep calling the electric chair the “chair of torture”. I guess that was a Turner decision. The “Refer-eye” camera makes a match that is already terrible to follow even worse.  This was a cluster, and then lowering a giant electric chair from the ceiling it gave them zero room to work. To add to the madness a bunch of face painted dudes in white, carry a stretcher down and just kinda sit on the ramp. God bless Cactus for blading in this piece of crap. I think my favorite part of the match is them showing a closeup of the switch as it sits in the ON position for like 30 seconds while in the middle of the match. My god, you couldn’t write better garbage than this. Abby’s bleeding everywhere now. Sting has blood on him as well but I don’t know who’s it is. Cactus makes a climb for the switch and the damn thing keeps falling down. Amazing.  I have been bashing this but I love this damn match. It’s so ridiculous you just have to sit back and laugh. WCW always had entertaining crap. 1-1

Winner: Sting’s team got the win after Rick Steiner reversed Abdullah into the chair and Cactus accidentally (after like 5 minutes of dicking around) threw the switch on him. 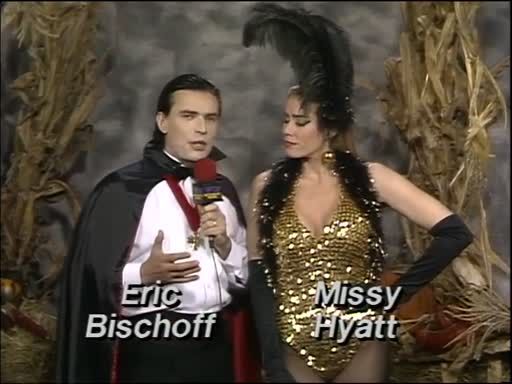 The Creatures (Uno and Dos) vs Big Josh and P.N. News

Yo baby yo baby yo…why did this match happen on PPV? This was just there to fill time for some reason. Also the announcing didn’t help matters, JR not knowing the difference between a Northern Lights and a Fall Away Slam is ridiculous. Waste of time all around really, unless you are just really in to masked tag teams. 1-2

Winner: News got the win for his team with the “Rap Master Splash”. Which if you haven’t seen it, is him falling like he’s terrified off the top rope.

Man, how was Terry not a bigger star? The guy looked like a million bucks and could wrestle his ass off. On the same note, Bobby is one of the most underrated in ring technicians to ever do it. These guys put on a good one. Bobby even took a gut wrench sit out powerbomb on that always awesome WCW ramp. I always loved that thing. I also love that old ass “computer” that York carried to ringside. It had to weigh 80 lbs. This is one of those matches that makes going back and watching old wrestling worthwhile. Two masters of their craft going out and having a beaut Clark. 2-3

Winner: Bobby got the pin with the Alabama Jam. Babyface Bobby is something to behold.

Great, I’ll have Bad Street in my head for a week now. Better than Freebird Road though. This was another match that I think could have been trimmed to save some time. Hayes came in with his arm in a sling and of course that came in to play almost immediately. Badd earned his pay by taking a hellacious hip toss to the floor. Other than that there wasn’t a lot to this other than Badd almost killing himself diving for a sunset flip of the top. Wow. Just a match. 2-4

Winner: JBB got the pin after the KO punch and Teddy distracting the ref during Jimmy’s pinfall attempt. 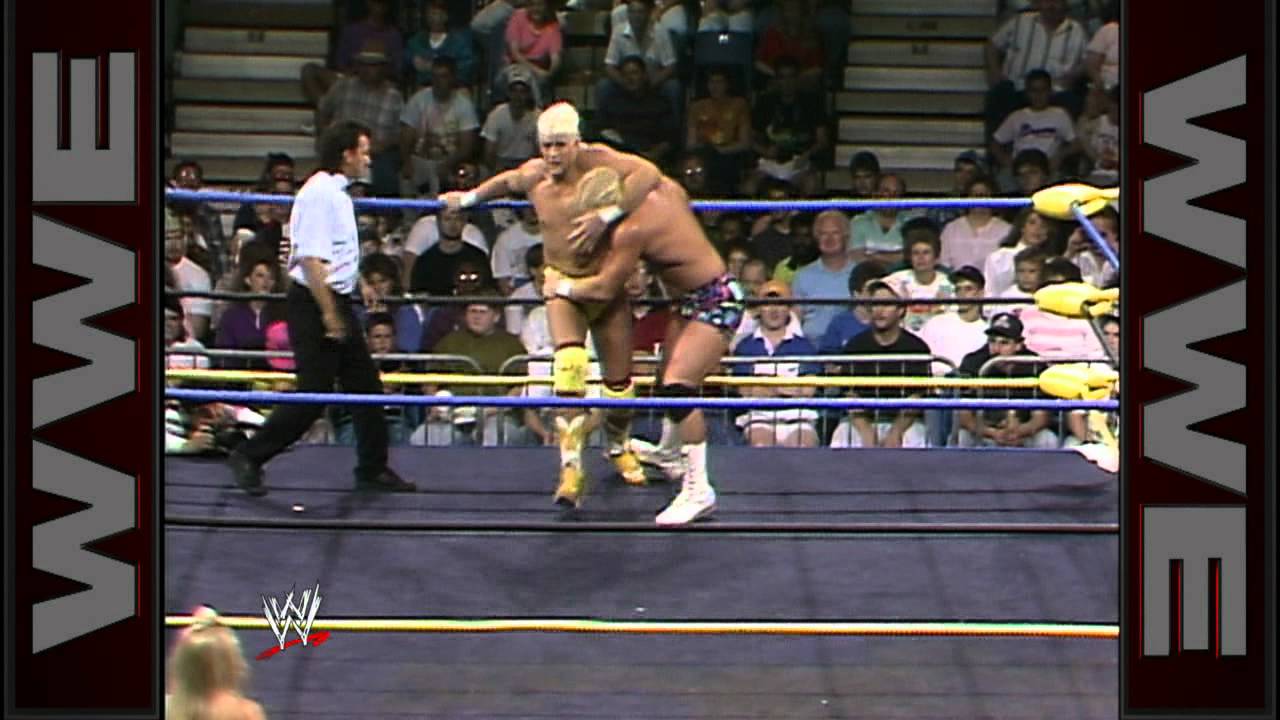 You got to give it to JR, he was blowing Steve way before it was fashionable. As soon as they start harping about the time limit one minute in to the match you can tell where they were going with this. Both guys are young and in incredible shape at this point in their career so at least they keep it moving. Both announcers spend more of the match mentioning Lady Blossom’s um… blossoms than they should have. Jerry Lawler would have died. Shockingly Dusty Rhode’s son starts bleeding from the forehead. After the blood starts to flow Austin starts to slow it down a bit with the cheating chinlock until Dustin fights back. The announcers hype the time limit again. The pace picks up in the last couple of minutes, pretty much like every TV title match with a heel champ. You could call this ending a mile away. Both guys bled and busted ass out there though. I’ll take it all week. 3-5

Winner: We had a draw after Dustin couldn’t pin Austin in time.

Nash’s giant blonde flat top haircut is a thing of beauty. Not as beautiful as Bill carrying a plastic world on his shoulders though. Nash looks like somebody cos-playing as Sting. This match was…um…not so good. If you really want to see future world champ Kevin Nash looking like a complete joke then this is the match for you. The only real wrestling highlight was Nash dropping Bill on his head with a backdrop suplex. These two make Brie Bella look like Daniel Bryan. 3-6

Winner: Bill got the win with the Torture Rack. The real winners were the fans, because this match went under 5 minutes. Any longer than that and people would have been jumping off balconies.

Winner: Van Hammer got the pin (which Somers tried to kick out of) after the worst Slingshot Suplex in recorded history.

I feel bad for these guys. How are they supposed to follow those last two all time mat classics? All right! The Refer-eye camera is back! I know it’s been said before but Morton really should have tried to commit to the new gimmick, as it was he looked ridiculous. This does take me back a little bit and makes me long for the time when we didn’t see a dive every time someone rolled to the floor. It gave the heels a chance to get a little heat and regroup. That being said this was really slow paced even compared to the Austin/Dustin match. Starting an entire new division they should have had a different style match than what we had seen all night. Not the same thing with smaller guys. This was fine but as a kid I remember it being better. 4-8

Winner: Pillman got the win and the championship with the cross body. 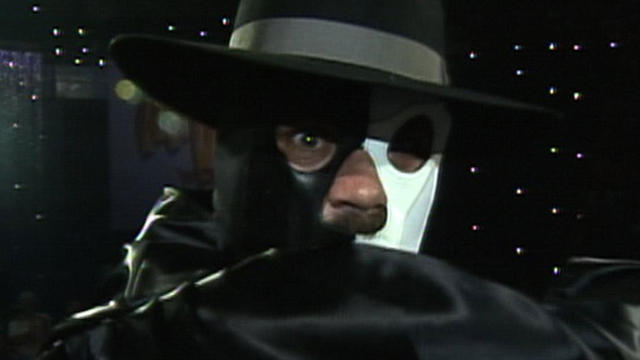 “This mysterious man has a mustache that’s all we know”. Really Tony? This was all story line and not much else. Zenk got in two punches and a dropkick before this was over. 4-9

Winner: The Phantom got the pin following the Hangman’s Noose Neckbreaker.

The wrestling god’s were cruel when they took Arn Anderson away from the ring so soon. The man could have a tag match with a broken mop. He had to because the Patriots sucked. Arn and Larry were great but they had a tough row to hoe with these stiffs. I did like watching them cheat even when they didn’t need to, that’s always fun. This was just 10 minutes of average tag wrestling but not much more. 4-10

Winner: Arn got the pin on Chip following a spinebuster. 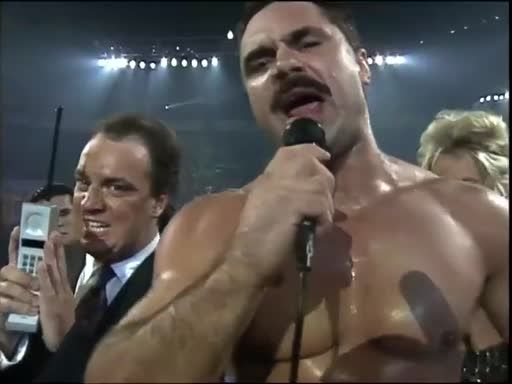 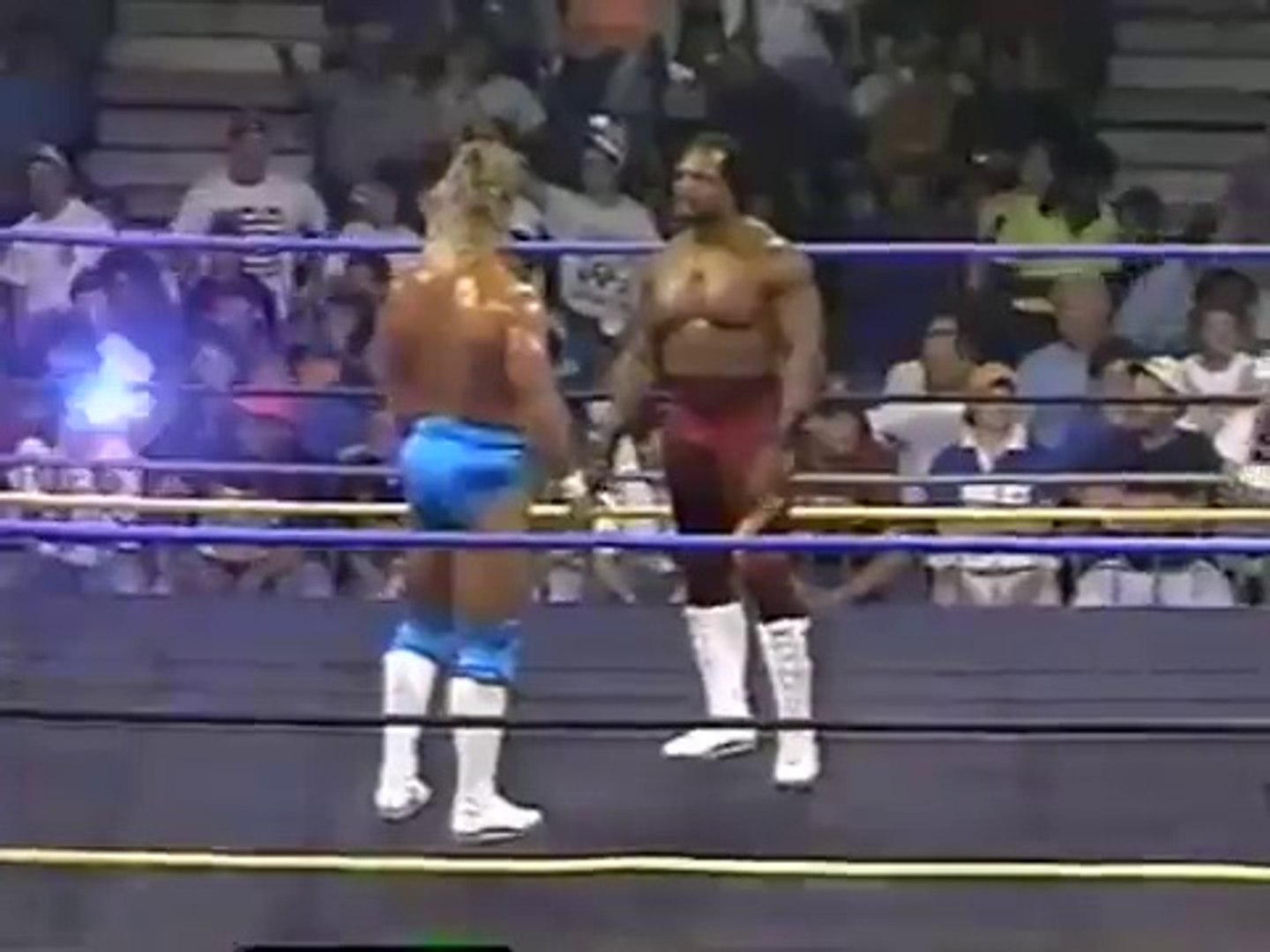 Mr. Hughes came out with the champ and Harley but was sent to the back immediately. Stupid WCW, acting like this was a sport with rules or something. This was all slow/power stuff to start as you might expect. Simmons was able to jump out and win the first fall after powerslam/spinebuster back to back. Then they take a minute break, so do I to refill my delicious Diet Coke.

I don’t want to say that they only did the one minute rest period so Dusty could be on camera the entire time but…that’s why they did it. Luger couldn’t get out of the gates early in this second fall. Even cheap shots weren’t working for him early on. Until Ron ran face first out of the ring like a moron he had the second fall in the palm of his hand. Luger very gingerly took control for a bit. To be honest these guys aren’t working as slowly as I remember and the match itself has been better than I thought. Harley finally got a little bit involved so a Dusty/Harley fight erupted on the floor. Luger ends up winning the second fall when Luger falls over the top rope for a DQ, even though the ref clearly saw Race affecting the fall. Jeeze. That’s just sloppy.

Before fall 3 we get another 45 second close up of Dusty saying inspirational things and not showing Simmons’ face at all. Luger is bleeding and both of these dudes are sucking so much wind that the first 3 rows have passed out from oxygen deprivation. Luger cheap shots the challenger but only fires him up. A pissed off Ron Simmons is nothing I want near me. Simmons was all over Luger and they ended up taking it to the floor. Ron then runs head first into the post football tackle style. That’s all she wrote for Ron. I’m not going to bullshit you here folks, this was a damn good main event. I really undervalued this when I was a kid. 5-11

Winner: Lex won the fall 3 and the match with an Attitude Adjustment Piledriver.

Final Tally? 5-11 There was definitely some things they could have cut but overall I enjoyed this show. The opener was insane, Bobby and Terry was great, Austin and Dustin was good and the main event delivered. Most of the stuff that was of lesser quality was at least pretty short and we got to see the beginning of one of my all time favorite factions. I’ll call this show a win.