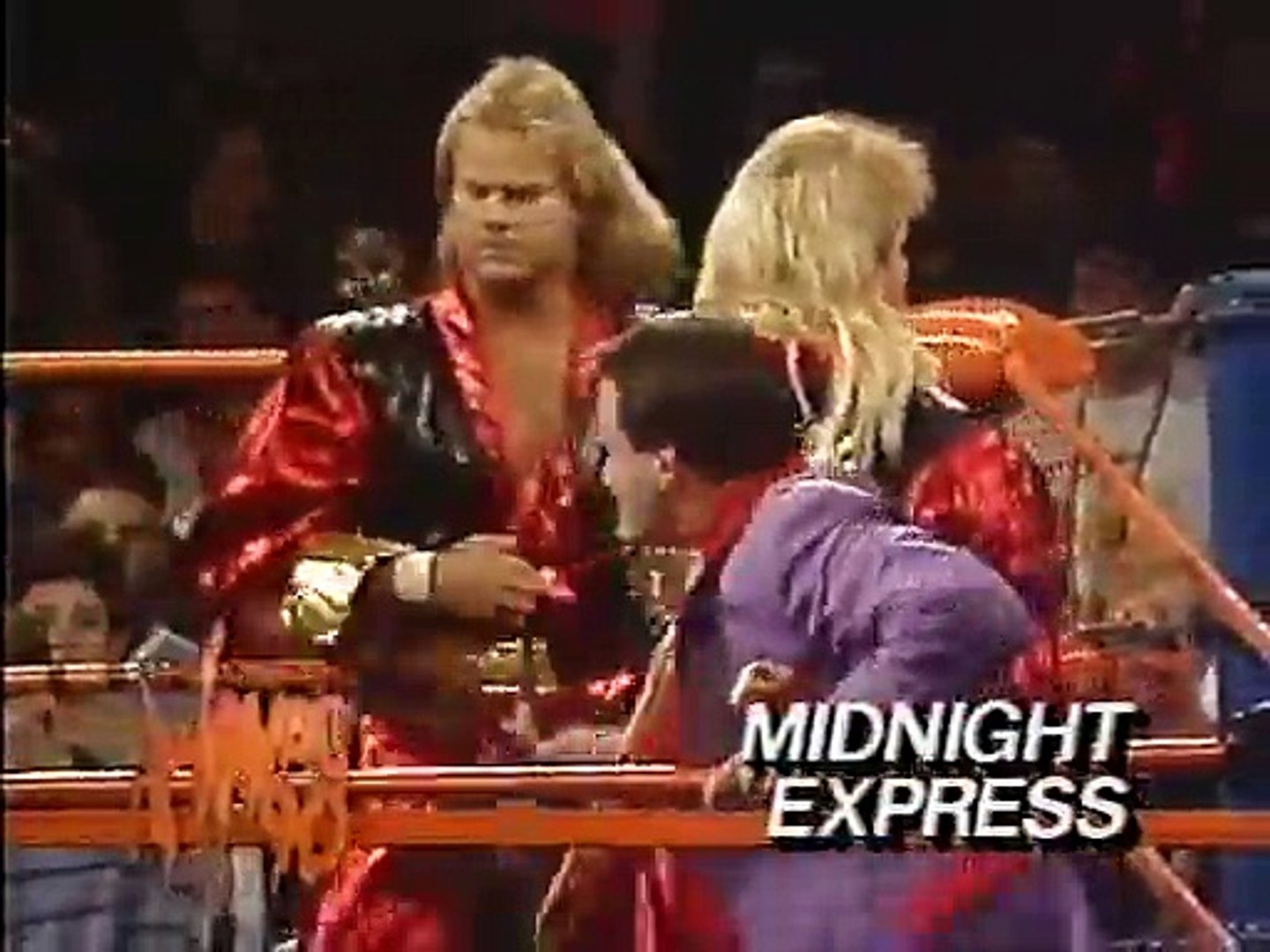 I could watch the Midnight’s beat up on Ricky Morton from now until the end of time and never get tired of it. The Express were so damn smooth with everything they did it is a pleasure to watch them work. Cornette’s cheating ass is also fun to see doing his job. The guy may have some crazy ass ideas at times but he is easily a top 3 manager that the business produced. Eaton’s Alabama Jam is also still a thing of beauty to watch. Tommy Rich did a really good Robert Gibson impression on the hot tag. The Southern Boys coming out dressed as Jimmy seemed a little weird but I guess it got them jobs in Smokey Mountain later. 1-1

Winner: Tommy Rich nailed Stan Lane with Cornette’s racket in all the confusion getting the win for this mongrel ass team.

I have zero hope that this match is as good as the first. Man, I hate it when I’m right. The Freebirds were pretty much garbage without the talented members and the RW’s were not the ones to get a good match out of them. This took forever and entertained me very little. So, that’s all I’ll say about that. 1-2

Winner: The Birds get the win after Hayes hits a sneaky DDT while the ref was dealing with Marley. God this sucked. 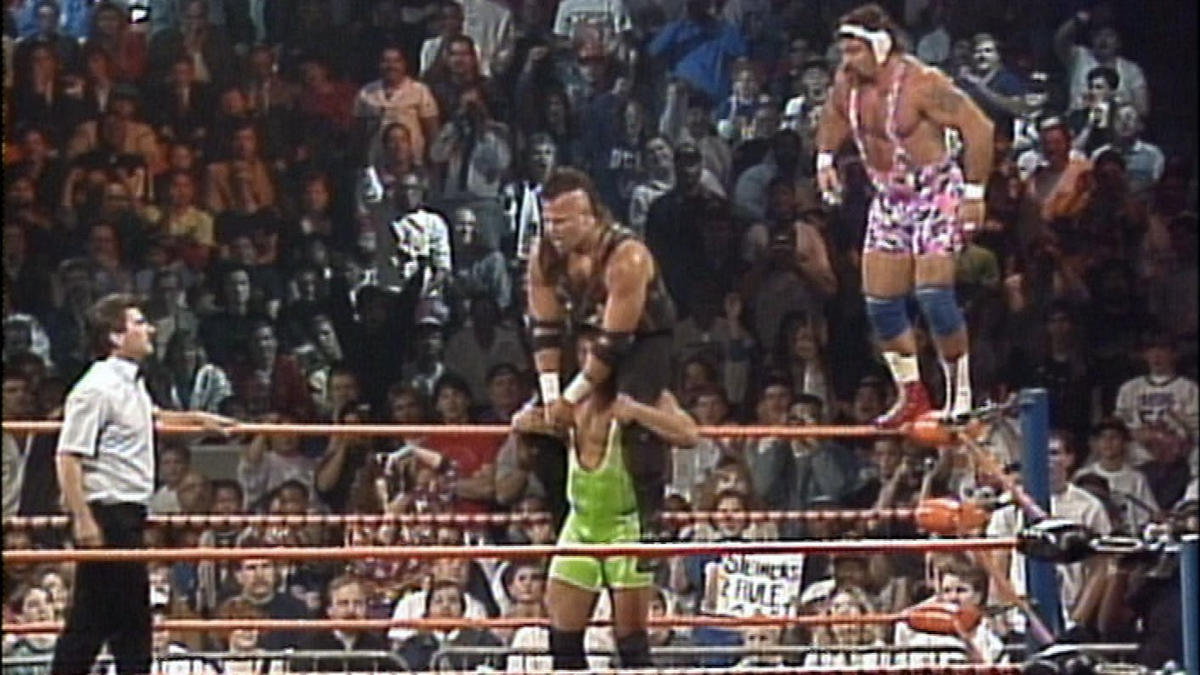 Yeah, I like fighting. These dudes started off hot. The crowd is into this big time. This is four dudes that don’t give a shit how hard you hit them, which I love. The Nastys worked over Scott pretty good and this may be one of the 2 best matches I’ve seen them in. This was a great match y’all. These four dudes just went out and beat the living piss out of one another and the crowd was hot for all of it. Great stuff from everyone involved and I thought it was better than the Midnight’s match so you know it was good. 2-3

Winner: Scott nailed the Frankensteiner on Knobs for the win. 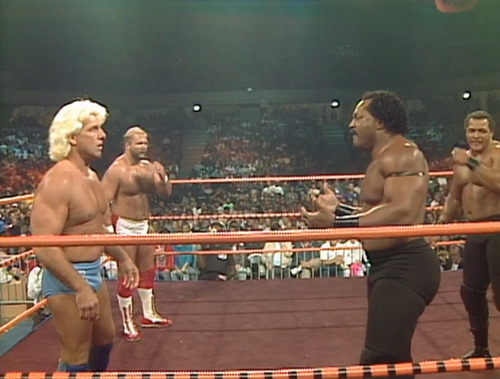 Unmasked Doom isn’t nearly as good sadly. This was still a really good heel vs heel contest with Flair being the only babyface to the crowd. This is my favorite thing about wrestling, because honestly Doom should murder these two middle aged dad looking dudes. Doom even morphs into the kinda babyfaces of the match. I did like this one, just not as much as the U.S. Title match. 3-4

Winner: We had a double count out after both teams brawled on the floor. 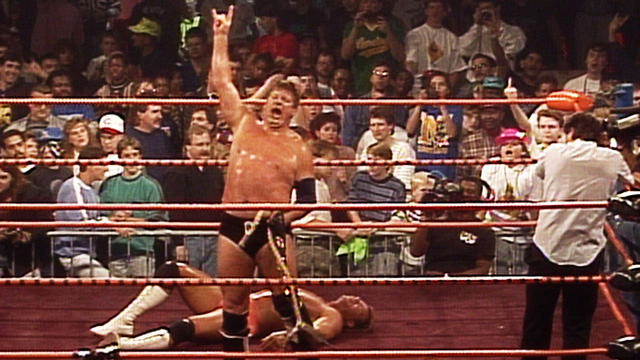 Hansen is out of his mind. Meanwhile; Luger and his mullet is crazy over. This was really punchy/kicky but in a good way. Stan can bring a good brawl out of anybody. It was kind of weird the 3 time US Champion Luger was talked about like he was the underdog the entire time. It’s almost as if WCW wanted Hansen to get over…maybe WWE should try this. We get Stan shoving the referee down and a Dan Spivey appearance. He tosses in the cowbell (which this match needed more of) but Stan misses with it. It didn’t end up mattering moments later. Luger looked like a doofus here. 4-5

Winner: Stan killed him with a Lariat while Luger ran at him going for…hell, I don’t know what he was going for. Also the Lariat was more like a forearm to the ear. Regardless, new champ. 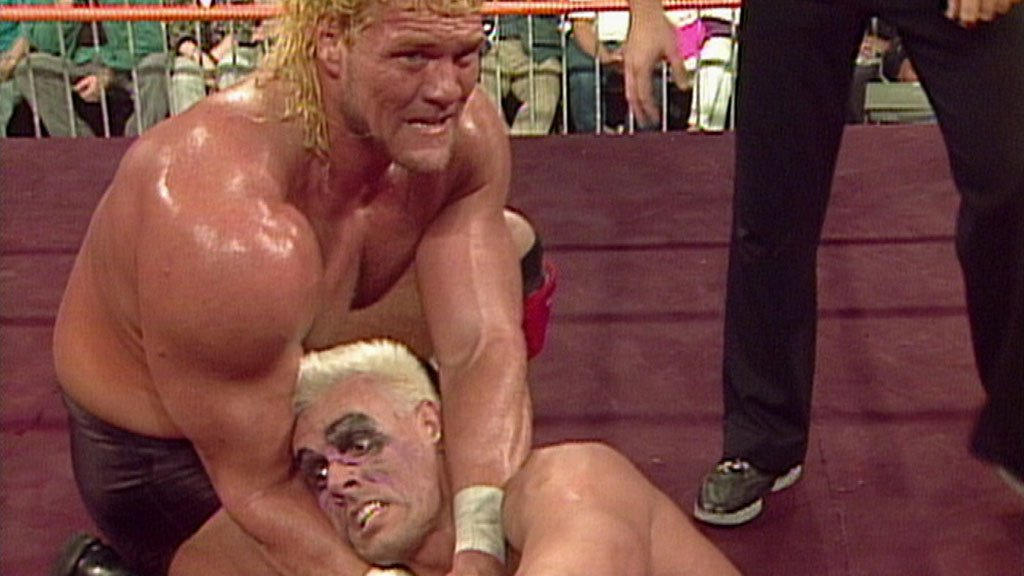 This is a pretty famous match. That’s probably due to the amazing amount of holds that were traded and the high flying maneuvers both men seemed to make up on the spot during this contest…nah. It was a lot of resting and punching. Sid doing a kip up is still pretty impressive though. There wasn’t a lot to this but Sting did hit a nice dive from the ramp to halfway across the ring before the Horsemen arrived for a distraction. Sid and Sting fight to the back. While back there Sting grew 3 inches in height and cut his rat tail. It was a strange strategy and it backfired.

Winner: Sid pinned Sting after a failed bodyslam attempt as clean as a sheet, kicking off the amazing title reign we all remember.

FINE. The crowd actually does go nuts for Sid’s apparent victory and the fireworks start. The actual Sting returns with a tiny piece of rope tied around his wrist where he was attacked by what appeared to be a boy-scout. He then nails Sid with the belt and the match actually ends. 4-6

REAL Winner: Sting got the pin with a small package. 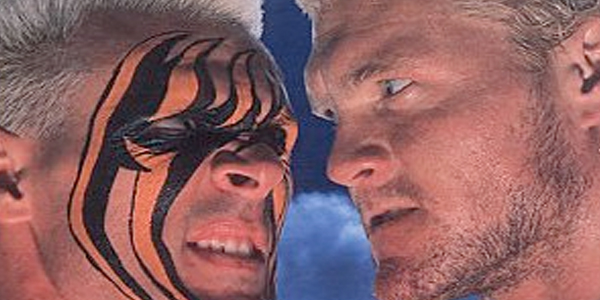 Final Tally? 4-6 Some of this was pretty good and some was complete junk (Black Scorpion and Freebirds I’m looking at you.).  My biggest takeaway was how bad poor Sting was treated as champion, the guy just couldn’t catch a break. Only one of the matches that were shown were what I would call bad so I can’t complain too much. WCW y’all.