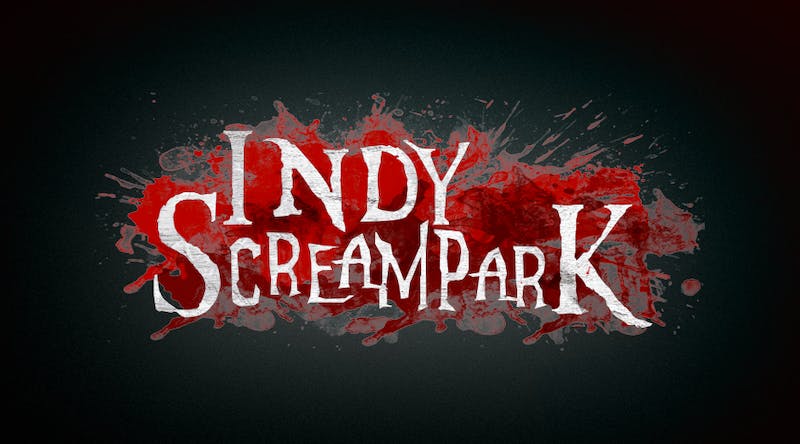 First off, this isn’t in Indy so if you are hoping for something right out of town get that out of your head immediately. It’s not super far out though don’t worry. Also it is just in the middle of nowhere enough to freak you out. There is plenty of parking ($5) and is well lit enough that you shouldn’t have a problem getting in the joint.

First they have booze, which is a major plus for me. Although $8 for a Coors Light is kind of steep. They also have all the food you would expect from a fair type environment, dogs, brats, burgers, funnel cakes etc. They also have a DJ pumping out appropriate mood music, fire pits and all kinds of creatures wondering around to keep you a little off balance before you head into the attractions. Also they have fun stuff to keep you occupied while you walk around like photo op spots and Zombie Paintball. The wife and I got a caricature made. The guy was talented. Pretty good start.

The first attraction we went to was called Zombieland Unchained. It had a nice setup with towers of cars everywhere and made you feel just a bit claustrophobic without it being overly so. This was also one of the attractions where you can “mark” yourself and become part of the action. We skipped out on that but some of the kids behind us seemed to enjoy it. The price range on this thing is determined on the website by the day but I”m telling you what no matter what it is spring for the VIP passes because we didn’t have to wait in line AT ALL. which is kinda nice. We walked right up to this thing and had a good time with our first haunt.

Haunt number 2 was Pandemic: Mutation. This was another haunt where you can tell they spared no expense on either the haunt itself or the number of actors within it. I wasn’t as quite into this as I was the Zombie haunt but it was still very good and worth the time.

Haunt 3 was the Blackout Factory. I really liked this because you filled in the blanks with your own imagination. Yes there were people with the jump scare deal but the THOUGHT of some weirdo being in there is way stronger than running into a teenager in a mask. Loved this and it was my second favorite haunt of the night.

Haunt 4 was my favorite of the night. It did an excellent job of combining the normal haunted scares with an atmosphere that let you do a lot of the work to yourself. Once again this was another haunt where watching the website video set up a backstory that combined with the atmosphere really told a great story. I can’t express enough how much I liked this.

Now we come to the last haunt of the night, the new Kilgore’s 3D Circus. This was a mixed bag for me because it was both my least favorite haunt but contained what I thought was the scariest MOMENT of the entire park. I really felt like the first 3/4’s of this haunt I had seen in other places, it’s not a knock, it was fine for what it was it just wasn’t as original as some of the other stuff. Then you get to the last room. I won’t spoil it for anyone reading but rest assured if you have a clown phobia then this would not be the spot for you.

Overall Thoughts: Even with a couple hour drive from my home to this I felt that the trip was worth it. The price is a little higher than a lot of other haunts but it has the added advantage of you being able to go through all of them as much as you want. You could honestly spend an entire evening between the haunts, booze and food and never get bored. I would say if you are within driving distance of this and enjoy a good haunt you should hit this place up because I guarantee you will have a good time.