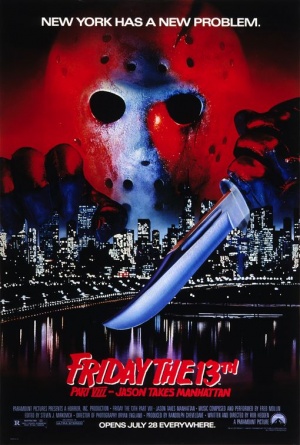 Here we are folks, this is the end of the line for the Paramount Pictures version of the franchise. This was the movie where it got so bad that they decided to pull the plug on the entire experiment. Between the LOUSY reviews and the small amount of money this one made it no longer became a product that they were comfortable being associated with. It’s amazing how that equation works with less money equaling less willingness to being attached to an embarrassing (to them) product. Hollywood huh?

Back story and Plot: A houseboat somehow hits some underwater cables and the electricity produced brings Jason back to life…again. The next day a group of newly graduated (25-40 year old) high school kids go on a ship to visit New York City (Is that a thing? Who goes on a senior trip AFTER high school? Also who goes on a damn cruise to a metropolitan city? This…doesn’t get better unfortunately.) and Jason sneaks aboard the ship. Oh, they forgot to mention in the other movies that somehow Crystal Lake is attached to the damn ocean.

So in a movie where Jason takes Manhattan they spend most of the movie on this boat. Jason kills kids with his usual gusto but him doing it on a boat kinda killed the mood of the movie. (Kane Hodder back as Jason was the lone bright spot in this turd.) Finally the survivors of the boat massacre make it to Vancouver British….er…um…New York City? There they have the final battle between good and evil that Paramount was willing to spend any money at all on. (You did get one cool spot where Jason was actually standing in Time Square and can imagine for a brief second that this movie would have been good had they only SHOT IT IN NEW YORK.)

Rennie wasn’t bad as the survivor chick, it’s just at this point in the series they weren’t doing much with character development (ooooh she was scared of water because her Uncle pushed her in…suck it up lady EVERYBODY had an Uncle that threw them in a lake.) and making movies in general.

Jason was drowned in Toxic waste. Apparently New York City used to do a toxic waste dump every night around midnight ( I guess there were no stringent environmental laws in late 1980’s New York) and ole Jason just happened to get caught in it and drowned. I guess they thought drowning him in water again would be stupid and this was a better idea…they were half right. Oh, and to make things even more believable Rennie sees him turn back into a little boy at the end. Yep…someone wrote this.

This dude tried to BOX ZOMBIE JASON. I can’t say how bad ass and incredibly stupid this was at the same time. He got some nice shots in too. Unfortunately his boxing skills were all for naught when he punched himself out like Ali vs Foreman and Jason punched his head off and into a damn dumpster. Until then though, kudos.

An Idiot’s Opinion: Apologies right away to my friend Mance Warner. This movie was a turd wrapped in burnt hair. Easily the worst of the series (yes even New Beginning). Paramount had a great idea for a movie then decided to spend no money to make it and left us with this big screen abortion. It had a couple neat scenes and Kane Hodder is a monster but that was not enough to save it. Man I hope nothing bad happens to Jason when New Line takes over in the next movie…