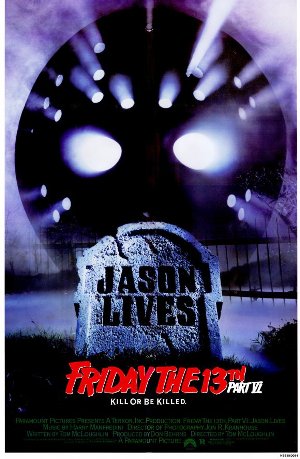 Nostalgia is an amazing thing. It can make things that didn’t seem like a big deal at the time into a huge deal in retrospect. Things you thought were just everyday things that you would always like and do become just old memories and past experiences.

I would like to think that nostalgia doesn’t have an impact on this next review, but since I’m a person, it will. When I was a kid we would visit my Mamma and Pappa on my Mom’s side in the summer. They would drive all the way from Indiana to Texas to come get us and spend time with my sister, my cousins and myself. We always had fun times and they always tried to keep us entertained and excited about the trip.

Sometimes they would get sick of having to entertain 4 kids at a time (who wouldn’t?) and let us pick a movie out and sit and watch TV in the living room. Almost 100% of the time, without fail this was the movie we picked.

I don’t know if it was the humor, the fact that it wasn’t really “scary” in a traditional sense or if to us it seemed like we were watching something that was way out of our age grade that drew us to it. We would watch this damn VHS tape twice a day if we could then we would go outside and act the damn movie out. Whoever was Jason would chase the rest of us around the entire yard (walking only of course) and would pretend that the driveway was Crystal Lake ( Lake Forest Green) the driveway was cut into a hill so it was deep enough where pretending was pretty easy. We had fun, and to be honest even after watching this movie a million times I still love it and it takes me back to a time when this kinda thing was the biggest part of my day. I appreciate my Grandparents for making that possible, and for probably turning me into a horror nerd in the process.

Anyway, after the absolute shit show that the previous movie was Paramount decided to go into a completely different direction with the tone of this one. Gone were the completely unlikable characters and murders that had no real consequence behind them. In would be actual humor that was funny and good acting. The script was tight and never took itself too seriously. Everything was a slight in joke to the audience except for Jason. Jason was serious, and for the first time we got a completely different Jason experience.

Back story and Plot: After the madness that occurred in the previous movie Tommy Jarvis was still a little on the crazy side but had somehow became more like-able (Having Thom Matthews playing the part helped) and is now in full on hero mode. Making him the hero did not make him smarter, he is the cause of literally every bad thing in this movie.

Tommy feels he needs to see Jason’s body to know that he is really dead so he and his buddy Hawes drive to the cemetery and dig up his grave. Solid plan right? Wrong. Tommy goes nuts and stabs Jason’s body a bunch of times with a metal pole. Unfortunately the Frankenstein factor comes in and the pole was struck by lightning. This marks the first official time in the franchise that we have an actual zombie Jason. Tommy tries to set him on fire but the rain stops that shit. Poor Hawes gets his heart ripped out and Tommy bails to inform the Sheriff.

I’m not sure if Sheriff Garris believing Tommy’s ranting would have helped saved some lives but it wouldn’t have hurt. Our newly zombified Jason now heads off to Crystal Lake (the town had changed their name to Forest Green and renamed the lake that as well, but Jason does’t care about your re-branding) to do what he does best and that’s murder some poor bastards.

The stakes are raised in this movie because there are actually kids in the camp (part of the reason we liked Jason so much as kids is we didn’t think he would actually hurt a kid, we hadn’t seen part 4 a lot) so everything feels more dangerous. The counselors aren’t unlikable pieces of crap here so when they die you actually feel bad for them.

Tommy teams up with Megan (Sheriffs daughter, that didn’t help his case) to try and stop Jason before he makes it to the camp. It didn’t work as Jason had wiped out the entire adult presence before they got there. (Not helping the counselors in any way was the fact that they didn’t even BELIEVE THAT JASON HAD EXISTED IN THE FIRST PLACE, seriously, the town had made it seem that everything that went down in the previous films was a made up story. My big issue was that i’m pretty sure these guys were old enough to watch the news and understand some of it. It had only been like 4-5 years story-line wise  from part 4 to here.)

By the time that our dynamic duo made it to the lake it was time for the final showdown with Jason and to save some damn kids.

Megan was unsurprisingly my favorite survivor chick. She was a smart ass and had a cool car, PLUS feathered hair. What was there not to like?

She turned on a boat motor and kept dumb ass Tommy from drowning. Tommy had this wacky idea that if they re-drowned Jason it would end whatever madness was happening, unfortunately that seemed like the only part of his plan he thought out. He and Jason fought on a flaming boat (which was awesome) and they finally got the chain around his neck after a propeller to the face courtesy of Megan. Without her Tommy is another body in the lake.

BEST CHARACTER IN THIS MOVIE?  The Old Caretaker

The dude was a 4th wall breaking machine. He was clearly drunk through the entire thing and looked at the DAMN CAMERA Jim Halpert style to make jokes about both himself and the audience (that kinda thing was mind blowing at the time and still cracks me up). “Some people got a real sick idea of entertainment” indeed sir, indeed, you old fart-head.

An Idiot’s Opinion:In case it wasn’t obvious, this is my favorite of the Friday films. It was funny, had cool kills and Jason being a zombie for the first time really added that missing piece to the character. Did the plot make sense? No, but I was along for the ride as a kid and I’m still all in now. This isn’t just my favorite Friday, this is one of my favorite movies period. I’m glad that Paramount didn’t give up on the franchise after the dumpster fire that was The New Beginning. The only problem they had with this movie was if Jason is a zombie, how do you REALLY kill him? If you guessed give a girl telekinesis and voodoo powers the next movie is for you!