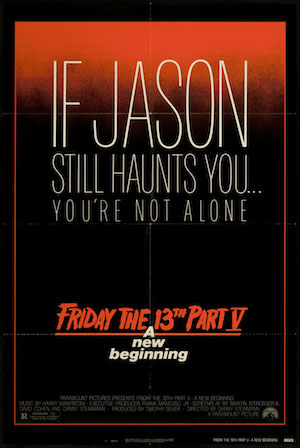 The problem the producers had was that they had killed off Jason, who was not only the only tie to the rest of the movies but also somehow the films only somewhat likable character. So they had to figure out a way to keep people coming back without the person that they were now paying to see. Somehow they figured on doing it in the dumbest possible way.

Back story and Plot: When last we left little Tommy Jarvis, he had just killed a mass murderer with a machete. For some reason this caused him to go a little crazy so he is being placed in the Pinehurst Halfway House to help with some of his antisocial personality traits.

Why they thought this joint was a good place for kids in any way shape or form is both the bad decision of the screen writer and whatever idiot is in charge of the Crystal Lake area. Roughly 5 minutes into the damn movie we get some psycho old lady and her idiot son trying to get the place shut down because the kids keep having sex on her property. On top of that one of the young (30 year old man AT LEAST) kids murders a fat kid for offering him too much damn candy, and does so with an axe someone gave him. Who gives a kid with that kind of anger issues a fucking axe?

As the ambulance arrives to take old Fatty Magoo off to the morgue one of our ambulance drivers almost has a heart attack from seeing the kid (and the camera holds on his shocked face for roughly 45 minutes of screen time…) but the other one plays the brutal murder off like an idiot.

Shockingly after that a guy with a hockey mask (blue trim, not red) starts murdering kids and people believe Jason is back from the dead to cause chaos once again. They try and keep us believing this garbage through the entire mean spirited and honestly poorly shot movie. Spoiler alert for a 30+ year old movie…it was the damn ambulance driver they showed that one time. Shocking I know. Also the fat kid was his so he probably had an OK case for being a little nuts.

Survivor Girl: Pam Roberts (along with Tommy again and Reggie the mf’n Reckless)

Pam checked all the boxes for the Friday survivor chick but she did so with the most help anyone has had in the series so far. You don’t impress me Pam.

An ambulance driver ain’t Jason God damned Voorhees. This dude was tough, but he only survived a tractor attack before being pushed out a damned window onto a harrow below. There we somehow see his face. Then the Sheriff comes in to give us backstory on poor Roy and why we should give a shit that this lame ass wasn’t Jason. Didn’t help. After this they try and set up Tommy as the killer for the next movie by having him have the hockey mask on and a knife behind Pam.

BEST CHARACTER IN THIS MOVIE? Reggie the Reckless

To be honest this character was a lot cooler when I was a kid. As an adult he is funny in a different way because he talks sooooo much shit and then screams like a bitch throughout the entire movie. Then he runs over a dude with a tractor and that brings him back around to OK in my book. Besides, it’s not like there were any other likeable characters outside if his burrito eating brother (that’s not racist, dude died because of a burrito really).

An Idiot’s Opinion: This is my least favorite of the Friday movies so far. The attempts at humor were awful. The murders just felt like they were done just to have murders and all the characters seemed like they deserved it. This was just not a well put together movie overall and definitely seems worse when compared to the movie that came directly before it. The only good thing about this is I know that there are better movies ahead.