People seem really unexcited about some of this. Any time Samoa Joe gets a title match I’m sold though. Let’s see what we got this month.

(Editors Note: As of Press Time on Thursday they haven’t added Balor vs Nakamura to the card on WWE.com so if it’s added later know we just didn’t skip it for funzies.)

Chad French:  I turn 40 today so most of my picks will be done while intoxicated. Enjoy.

Josh Martin: Josh is back with us after having some health issues. Good to have him back. 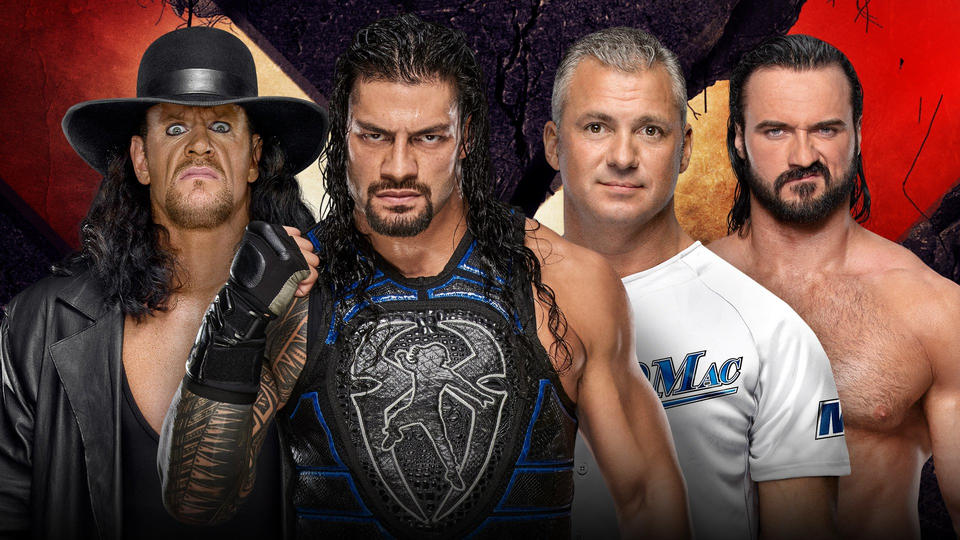 Chad French:  They already made them a shirt. To be honest? The shirt is bad ass.

Drewcifer Jones: This is my “Who could possibly care” match of the week. I guess the heels win causing a rift between Undertaker and The Big Dog. Then we get Yard Wars 2!

Anthony Harper: Is there anyway this is just a tag team match with no interference? Idk, but I’ll take The Undertaker and Roman to humble the “BEST IN THE WORLD.”

Lee G:  Shane & Drew win this. My hatred for Taker says so.

Jamie B: I couldn’t phrase my distaste for Shane McMahon any better than Kevin Owens did. He said everything we all were thinking about having Shane shoved in our faces week after week. I think this match signals the end of whatever this whole Shane thing is, with Undertaker getting the win for his team.

Josh Martin: No way Taker loses. Don’t see a point to this match at all tbh. 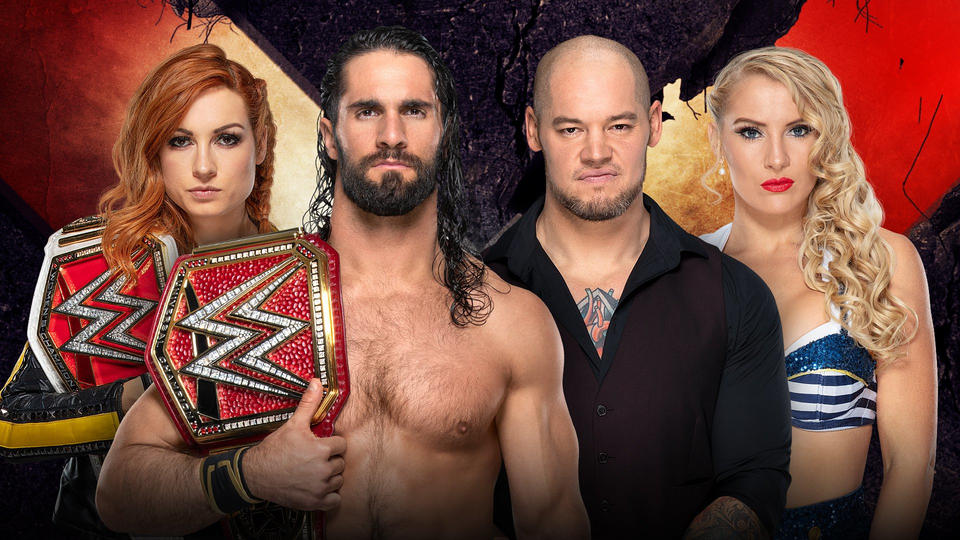 Chad French: I know WWE makes bad decisions, but no way they kill both titles on a B show like this.

Drewcifer Jones: At least this isn’t an elimination match like they had on RAW. That was an obvious failure of a match. The question here is would they really switch the titles like this? Nope. Good guys win.

Anthony Harper: I hate that they made their real life relationship a story like past superstars, but give me the Man and Beast Slayer.

Jamie B: I’m excited for this but also dreading it. I could see them being awful and having Corbin and Evans go over. It makes no sense for Rollins and Lynch to lose, but with the new landscape of WWE, it’s hard to tell. I’m going with my gut and thinking we get stuck with new champs Sunday.

Josh Martin: Seth and Becky win, this match will be terrible. 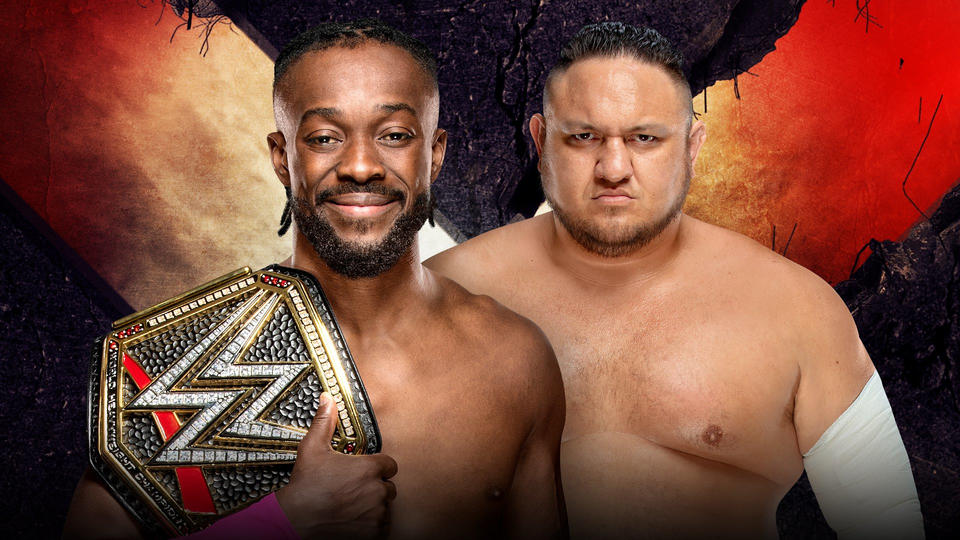 Chad French: JOE. I hate to imagine this dude never winning the title before he retires,.

Drewcifer Jones: Joe is a Dragon for Kofi to slay. This is classic pro wrestling booking. Kofi wins.

Anthony Harper: Is this match happening? I’ve read Kofi is injured, so if that’s the case, I’ll take Joe.

Lee G:  Joe should win this but doesn’t.

Jamie B: I love Kingston and I’m so glad he’s finally at the top, but his fire has faded and it seems like people are starting to get bored with him as champ. I hate to say it, but I think Joe ends up winning this.

Josh Martin: Kofi wins again, I hope. I think he has the strap till Roman takes it, prolly before SD moves to FOX. 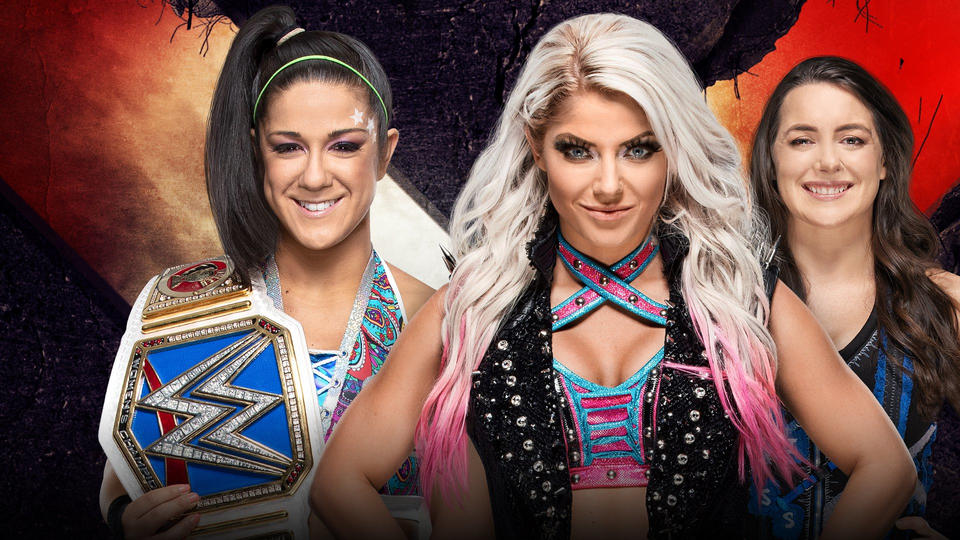 Chad French: Bayley should keep it. Nikki should turn on Alexa and make Alexa the face somehow. People want to cheer her anyway.

Drewcifer Jones: Nikki Cross wins and then gives the title to Alexa. Apparently she can’t wrestle anyway. This is the only way I can see to switch the title here.

Anthony Harper: Bayley win as Cross will hit Alexa or Vice versa and will lead to Bayley being right about Bliss using Cross.

Lee G:  Bayley somehow pulls this out because if not awkward 13 year old girls will cry.

Jamie B: I’m not a fan of Cross as a face, not because of anything she is doing wrong, but because the heel persona just fits her better. I think this match will be the turning point and Cross will finally see Bliss for what she is. Bayley will retain, and Bliss and Cross will feud afterwards.

Josh Martin: Bayley retains. I think we see Sasha and she helps her win. 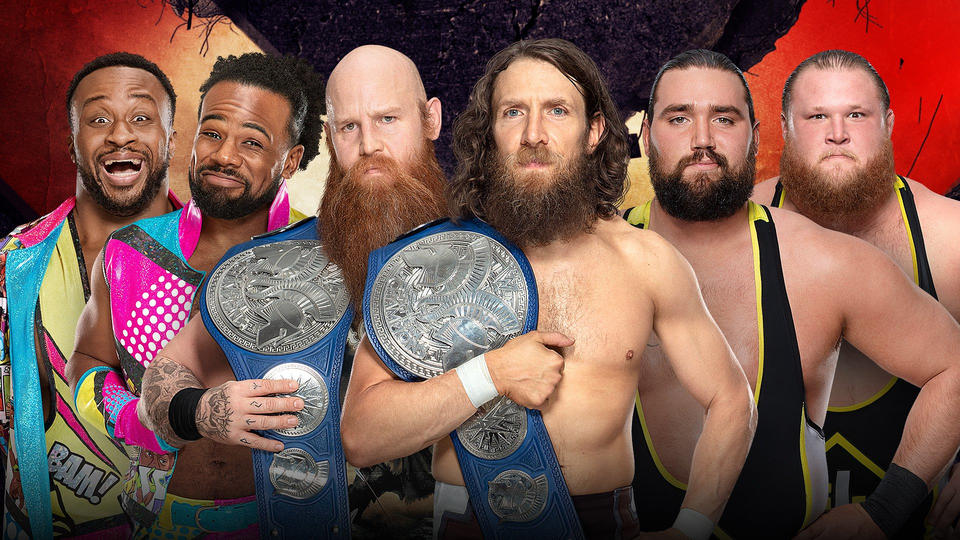 Chad French: The Planeteers should keep the belts. D-Bry should have one until he decides to hang them up.

Drewcifer Jones: New Day needs something to do. I think they will win. Can’t really put any stock in Bryan and Rowan since they didn’t make new hemp titles. New Day wins.

Anthony Harper: I think Heavy Machinery will find a way to win this match.

Jamie B: I love all three teams, so this one is tough. I think it comes down to Heavy Machinery and Bryan and Rowan. I am really pulling for Heavy Machinery to win this and establish themselves as a strong team.

Josh Martin: I’ll take Heavy Machinery. Otis is so entertaining I think they have big plans for them, at least I hope so. 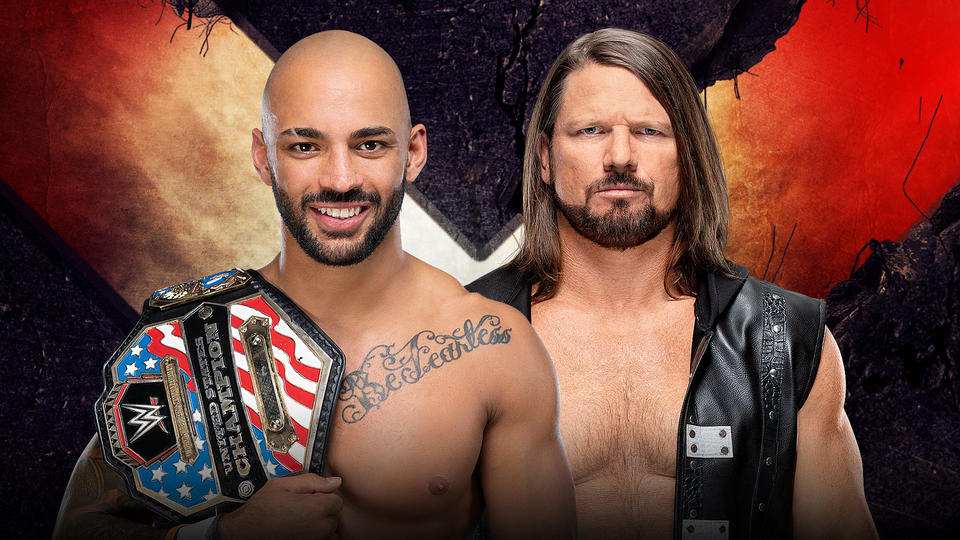 Chad French: I think this ends in a DQ. The Club needs to murder someone to prove a point.

Drewcifer Jones: Man. This could be something special. I’m so glad AJ turned heel. He’s great at it. I think Rick O’Shay will win against all odds.

Anthony Harper: Given time this match will steal the show as Ricochet gets his revenge over Styles and the Club beating him down the last 2 weeks.

Lee G:  Ricochet will have his hands full. AJ wins this round.

Jamie B: I was so happy for Ricochet to win this title, but damn they didn’t waste any time giving him some major competition. Styles is a beast, but Ricochet is a great talent who needs more time in the spotlight. I think Ricochet will retain.

Josh Martin: AJ beats Ricochet. Probably cheats to do so. My NJPW mark self us loving the Club and hope to see the good bros get the straps soon as well. 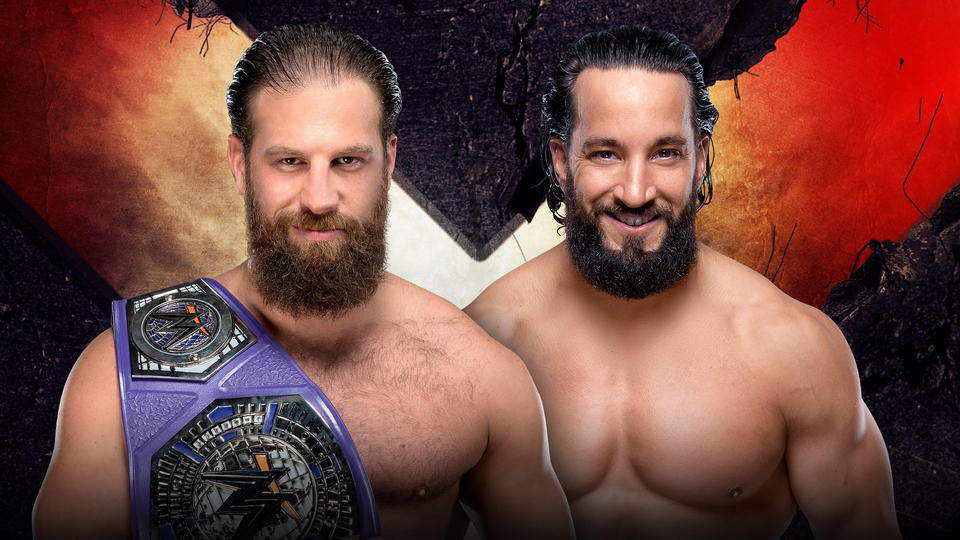 Chad French: Drew should be champ until the sun explodes.

Drewcifer Jones: What happened to Buddy Murphy? Oh well….. I think Drew is the guy they want to be top heel on 205 Live going forward. That makes me think he will cheat somehow to win this one.

Lee G:  Nese. Without an explanation.

Jamie B: I’ve been slacking on my 205 Live, so I know nothing about the build to this match. I’ll just go with Nese because I like him better.

Josh Martin: Still don’t watch 205 live but I like Gulak so gimmie him. 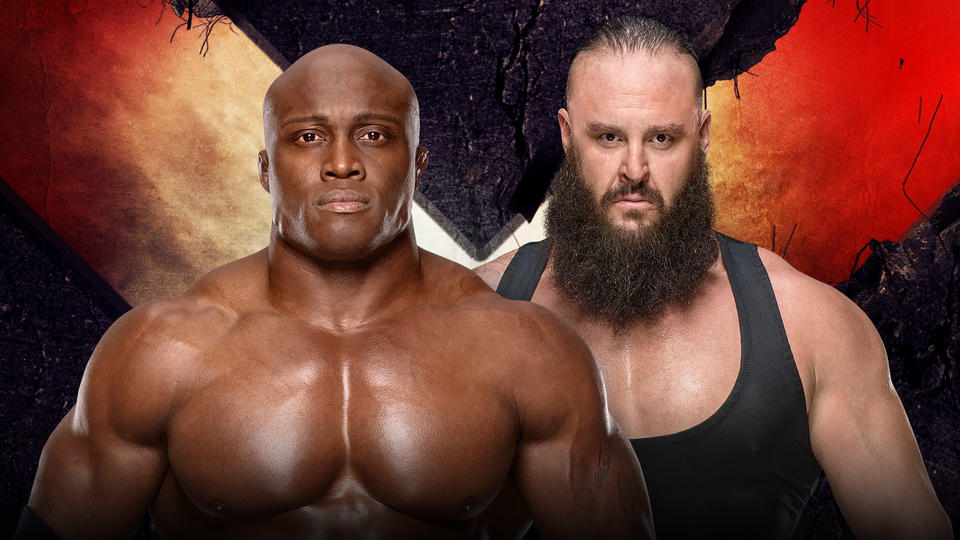 Chad French: You have two MONSTER great athletes and they have killed them both almost completely off. Braun is younger, rebuild this dude.

Drewcifer Jones: I think they’re building Lashley to be in the main event picture. Therefore he will defeat Braun. Poor Braun.

Anthony Harper: Strowman and may this be the end of their feud, please!

Lee G:  This will be my smoke break. Yawn….I mean Braun wins.

Jamie B: That spot on Raw was brilliant. It was the absolutely perfect move to set up this Last Man Standing match, much better than arm wrestling. I’m such a huge Strowman mark, I can’t imagine him losing this. He’s a very scary man, and I know Lashley is a bug guy in his own right, but Strowman needs this win.

Josh Martin: The last man standing match is a draw. Some terrible bump kills them both, maybe off the stage? 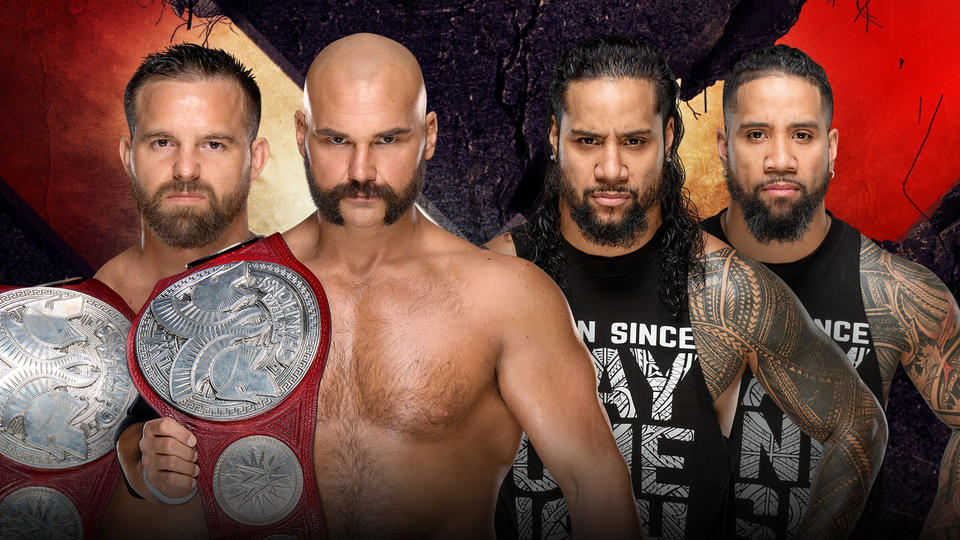 Raw Tag Team Champions The Revival vs. The Usos

Chad French: The Uso’s do not need these belts. The Revival does, let them cheat to win for 6 more months.

Drewcifer Jones: The Usos have been around so long. You got to respect that. I don’t know which team is the champion now, but the Usos will be at the end of this match.

Anthony Harper: The Uso’s get their belts back.

Jamie B: No more Usos as champs please. I need a break. I feel like The Revival have barely gotten to do anything during their title run, and I hope that chances. Our champs will retain and feud with anyone but the Usos next please.

Josh Martin: Revival keeps the belts. Hopefully for a long time. They’re the best tag in the biz imo. 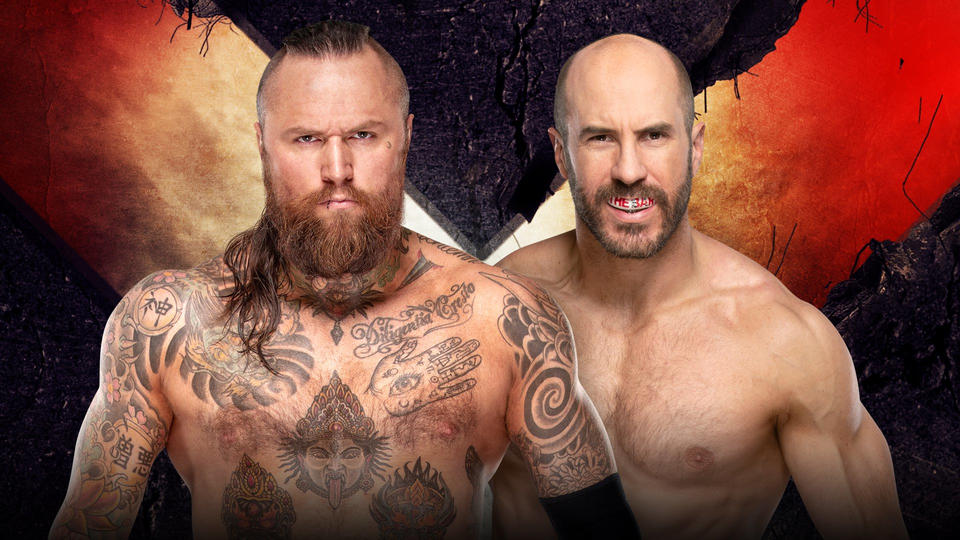 Chad French: There are not enough flame emojis for how good this can be. Cesaro should have been WWE champion by now and I’m starting to think it may not happen for him. Black on the other hand I still have hope for so he wins it.

Drewcifer Jones: This feud is complete nonsense. Really hoping it’s a distraction and the real feud will be a Black vs Bray Wyatt somehow. The match will probably be damn good either way. Black wins. Obviously.

Anthony Harper: Forgot about this match and this could be a match of the night too. This has the potential of being an epic showdown. I can’t imagine all these hype videos will have Black lose, so Black over Cesaro in a great match.

Jamie B: Why wasn’t it Bray Wyatt?!? Cesaro is great so this match will be killer regardless, but I got my hopes up. Black needs this win to continue doing whatever it is he’s doing. Sorry, Cesaro. Maybe next time.

Josh Martin: Black beats Cesaro. This will be the best match on the card. I believe black is gonna be pushed to the top.