Yo and several more Yo’s! This is J.Rose ring announcer for Fight Or Die Pro Wrestling and this is the first FOD Rundown I’m doing for the great folks at MWT. This is a guide for anyone new to the world of FOD or just looking to brush up on what all’s going on for this event. For those new to FOD here’s a couple of tips in case it’s your first time:

Not so important Notes: 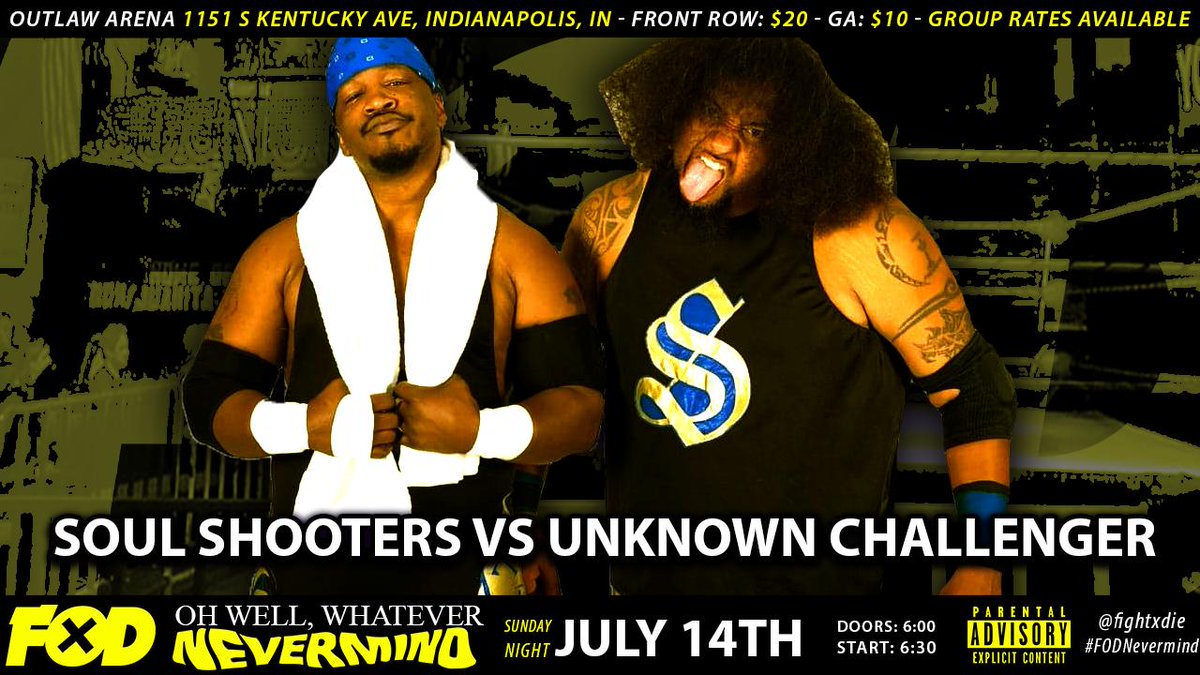 I’ve heard all sorts of guesses on who’s going to be the ones to face Appollo Starr & Dru Skillz, everyone from the IFHY odd couple of Tyler Matrix & Cole Radrick to Little Flower Warfare of Shain Bender & Sage Cainan to some variation of the Lost Boys, and that’s only the tip of estimations. Only concrete answers I’ve gotten out of management is that “they’re the highest touted tag team to ever step foot in FOD”. 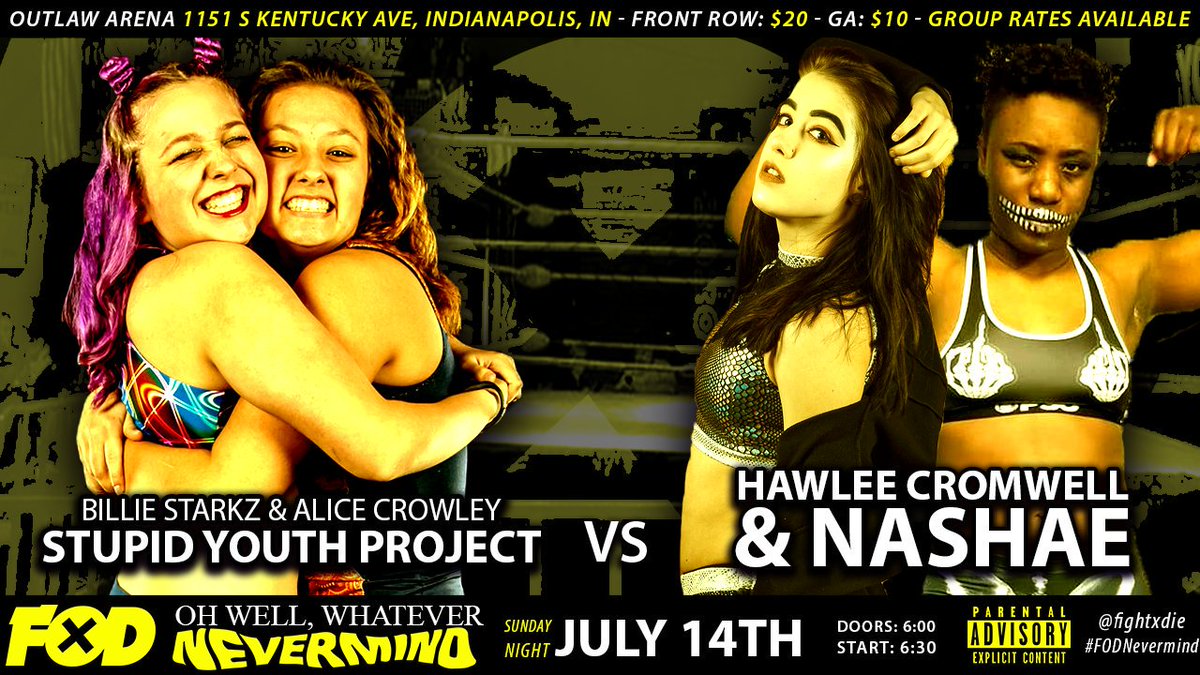 Stupid Youth are on a roll right now and may be able to take claim of being the best tag team in all of Fight or Die after beating their IFHY big brothers in Shawn Kemp & Johnathan Wolf last show.

This show they take on the first time tag team of Hawlee Cromwell and NASHAE both making their FOD debut. Cromwell, a frequent dabbler in the dark arts, has wrestled across the country including stops in DEFY in Seattle and FREELANCE in Chicago, her partner NASHAE is no slouch either. The locker room has talked about how NASHAE is the current top student at the WCWO Training School and while she’s still very raw and unpolished, she’s extremely athletic and a knockout queen in the making.

The key to this match is the rumors of Cromwell testing out her dark arts magic on NASHAE in their strategy sessions for the match. Will the witch’s brew conquer SYP or will the teenage sensations be able to get one more victory in FOD before summer vacation comes to an end. 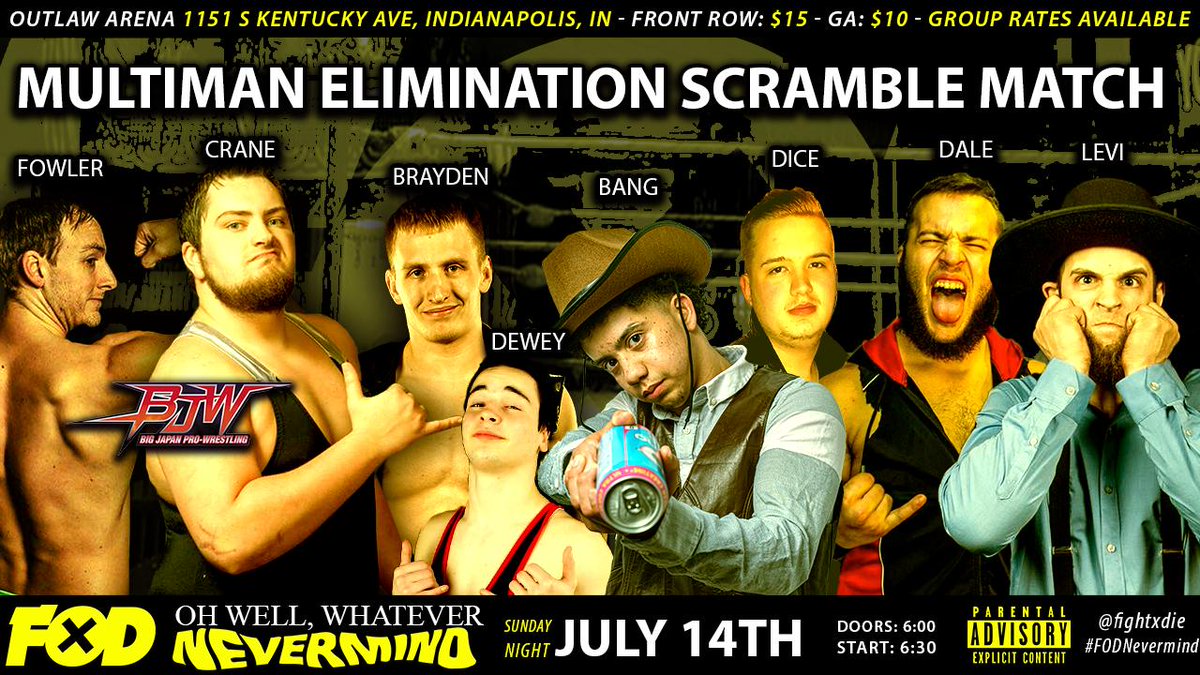 So instead of writing up paragraphs about this match, I’m just gonna quickly run down each opponent in the match, at least the ones we know of, anyone is bound to pop up in this one. 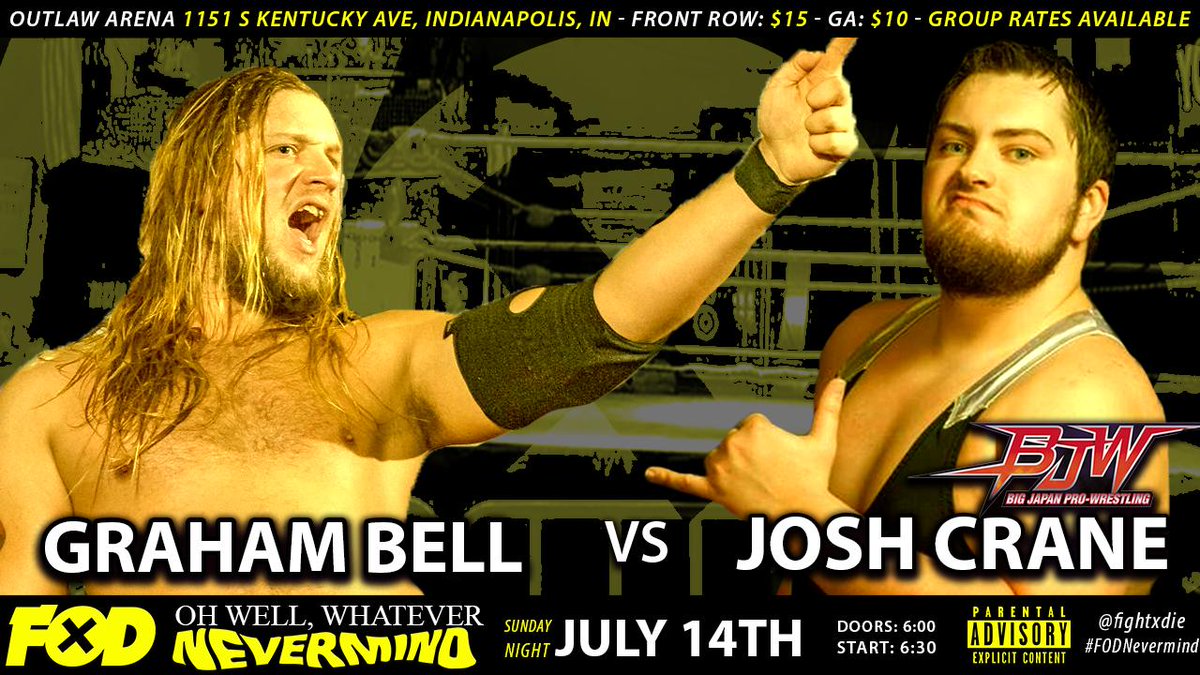 Josh Crane just accomplished his career long goal to go and wrestle in Japan for deathmatch wrestling company BJW. Not only did he do that but he main evented several shows and impressed management a ton.

We wanted to know what “Never Say Die” learned and showcased in the land of the rising sun …so we decided to take him out of the scramble and put him up against a man who carries a bazooka in his first match back in Indianapolis. 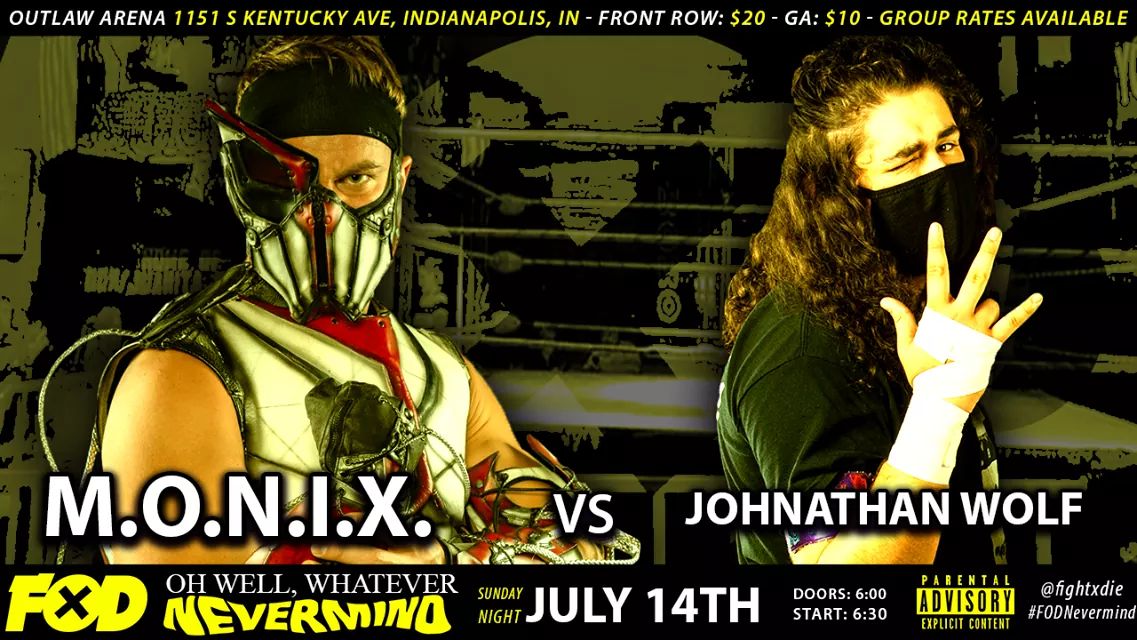 Sometimes I don’t really need to write anything because the match will tell you all you need to know. This is one of those times. Johnathan Wolf is largely considered one of the if not the best wrestler in the city of Indianapolis if not the whole state and MONIX is considered that for his home area of Chicago, IL.

MONIX debuts in FOD against Johnathan Wolf. Shut up and watch. 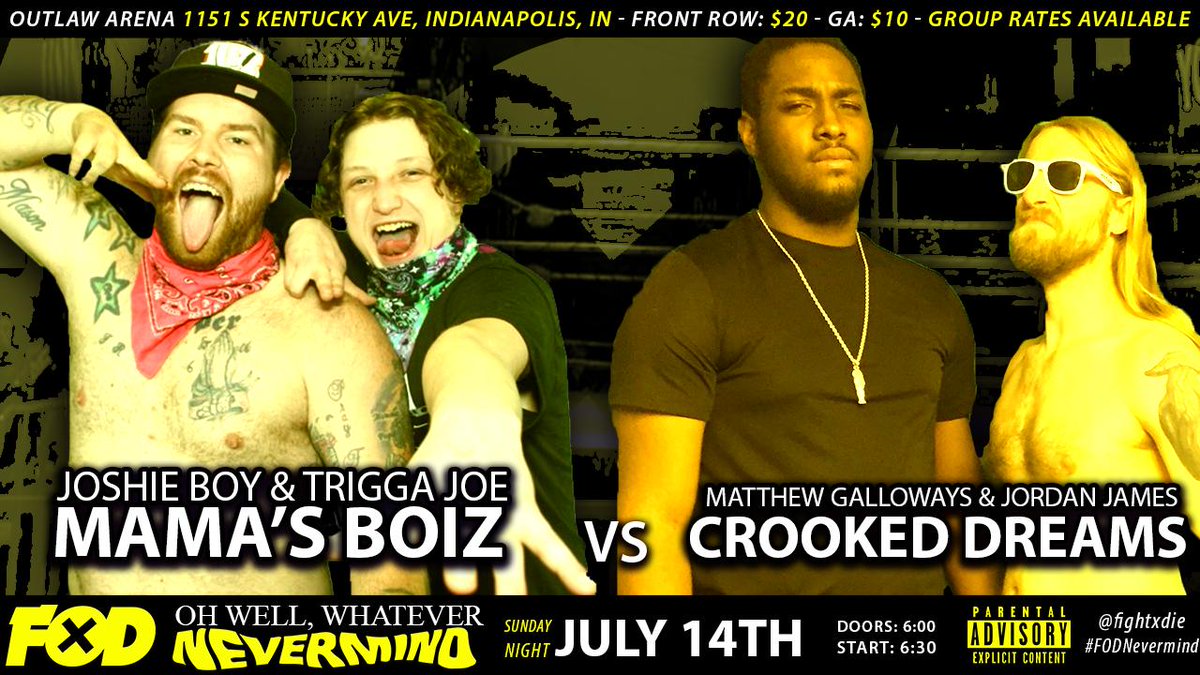 The Crooked Dream of Matt Galloways and Jordan James is the longest consistently tenured tag team in all of Indianapolis right now. They’ve been going longer as a team without any breaks or pauses than any other team on this card including IFHY. In a statement delivered by their manager the Skull Crusher for MWT, Crooked Dreams stated

“We’re tired of being disrespected by management and by these people in the crowd. Week in and week out while everyone is off traveling and doing what they do, we’re the ones who are there every single week but outside of last month what do we get for it? Nothing. IFHY gets important matches, Stupid Youth gets placed above us on the card, Crooked Dream gets nothing. Something got to change and this month may be the month where the change happens, whether they want it or not.”

Facing The Crooked Dream this month is the debut of standout Southern Indiana tag team, the Mama’s Boiz of Joshie Boy and Joe Trigga Travis. The MB’s are former IWA-MS Tag Team Champions and recently got a roll-up win over IFHY in Jeffersonville. The Boiz want to come into FOD with a notch in the win column but the self-proclaimed 1151 warriors aren’t going to make it easy. 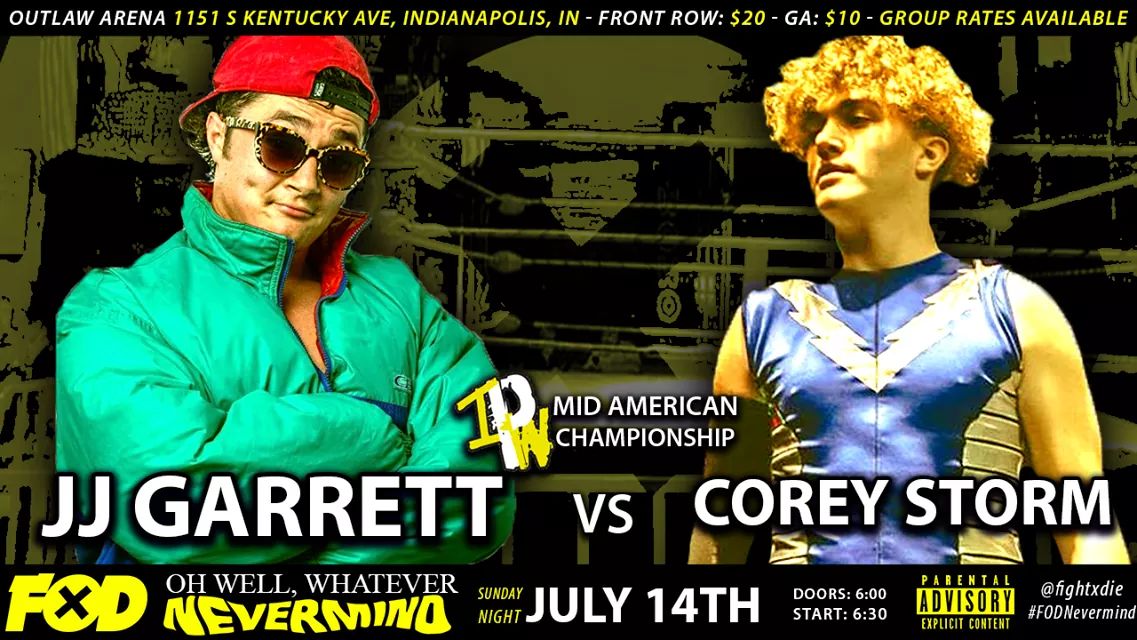 A lot of the people you see topping the card here at Fight Or Die are closer to being finished products as far as in-ring proficiency and identity go but this wasn’t always the case especially not in the year of 2016. Back then people like Wolf, Kemp, Patricks, Radrick, Perry, Crane, Jordan James, and Calvin Tankman, all crafted their trade at IWA Mid-South in southern Indiana and joining them in this plight was a 15-year-old Corey Storm.

See Corey wasn’t this semi-cut hero that we see now, he was a skinny kid with stupid hair and even more stupid of a moveset. He was a project for sure but no one ever thought he would be anything more than a Kentuckiana local. On the other hand, there was JJ Garrett.

JJ was on top of the world and Corey was looking like he was going to fade into nothingness. Fast forward three years and the roles have flipped. JJ took a considerable amount of time off to heal injuries and restore his mental health and Corey took that time JJ was away from wrestling to make waves for himself. Corey has become the man with the most FOD Scramble Championship reigns, going toe to toe with some of the hottest indie talents, and securing a roster spot in Ohio Valley Wrestling.

In his time away Corey Storm has matured into a extremely well-rounded pro wrestler while JJ still views him as that same skinny kid who couldn’t lace his boots back when he was getting thrown around a Jeffersonville roller rink. Sunday, Corey looks to prove his worth. 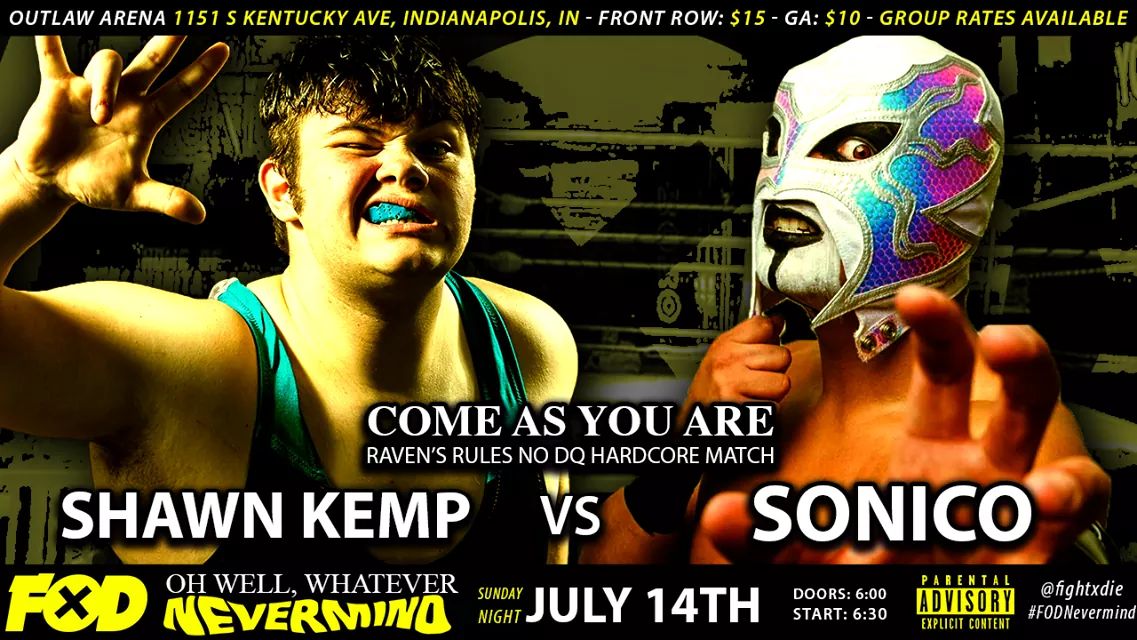 This is so messy that it needs its own article. Look out for it soon.

(Editors Note: Thanks to J.Rose for actually TAKING THE TIME TO HELP PROMOTE SOMETHING HE IS WORKING ON.) You would be shocked at how many people don’t want to do that.)