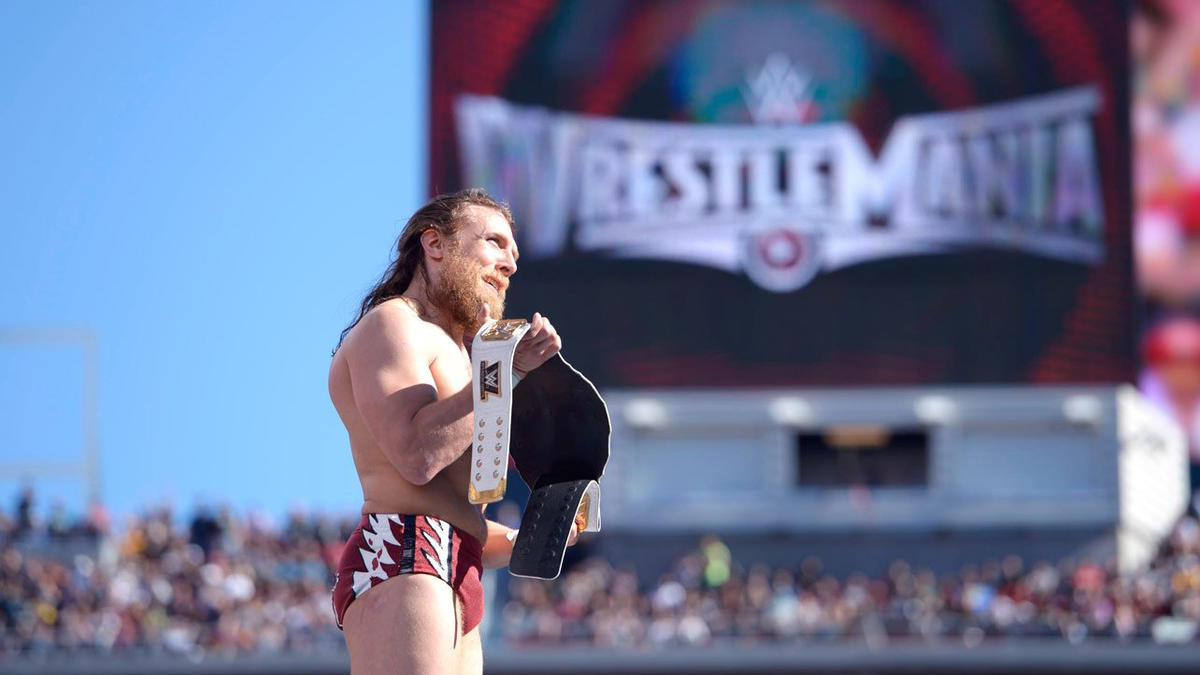 Shockingly the crowd is all about Daniel. Cody’s robe is crazy. Everybody dives right in literally and figuratively. These guys were going crazy with those ladders. Cody taking that superplex from up top was nuts. R-Truth continues to be a national treasure whatever he does. Matches like this are the reason Daniel had to retire as IC Champ. Woof. These dudes just didn’t care. Ambrose took a sick looking powerbomb from Harper from the inside to outside of the ring onto a ladder that didn’t break his fall at all. Complete craziness from bell to bell and another sad reminder on how much I miss Bad News Barrett.

Winner: Daniel Bryan got the win after beating Dolph in a headbutt battle at the top of the ladder. The place exploded. Kinda sad what happened after, but at least we have Daniel back now. 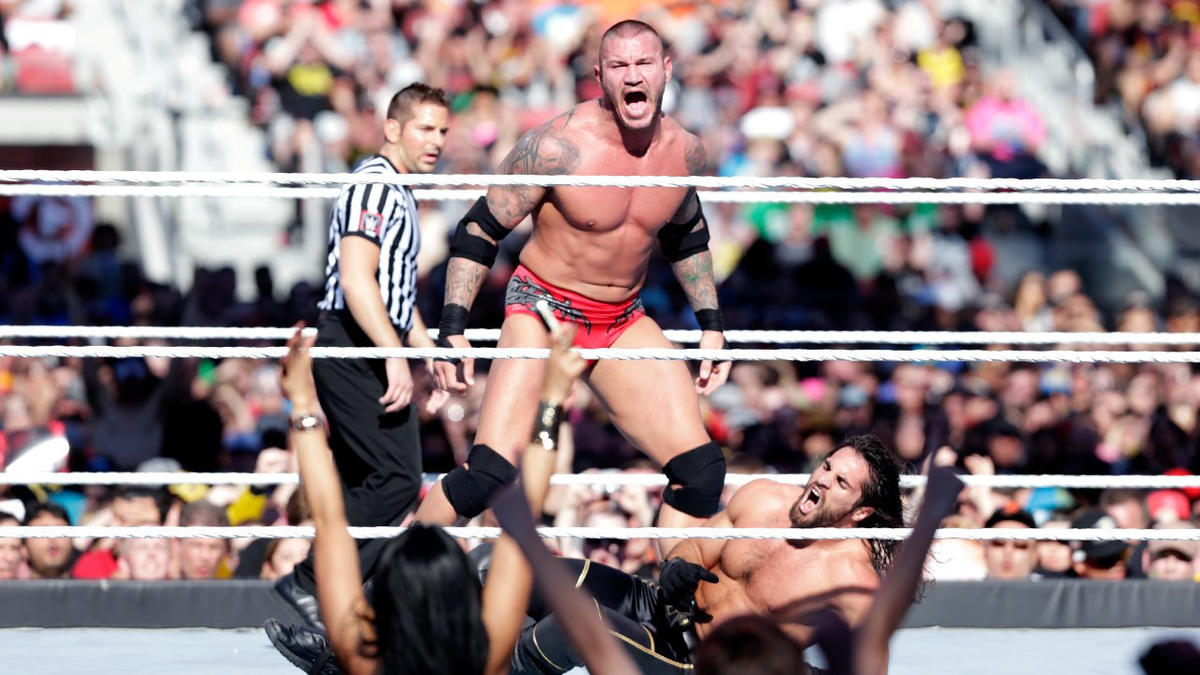 I know it’s a relatively new thing but the “Burn it Down” at the beginning of Seth’s music kinda makes it better. It’s really missing here. I’ll be honest folks, I liked this one a lot. Just a really solid wrestling match from two guys that know what the hell they are doing. Seth is amazing and when Randy is motivated like he was here it can only lead to good things. Man, Seth even got to kick out of an RKO which even re-watching this surprised me. Loved this. So far this show has been pretty awesome folks.

Winner: Randy got the pin after one of the sweetest counters you will ever see with an RKO out of the curb stomp. Amazing visual. 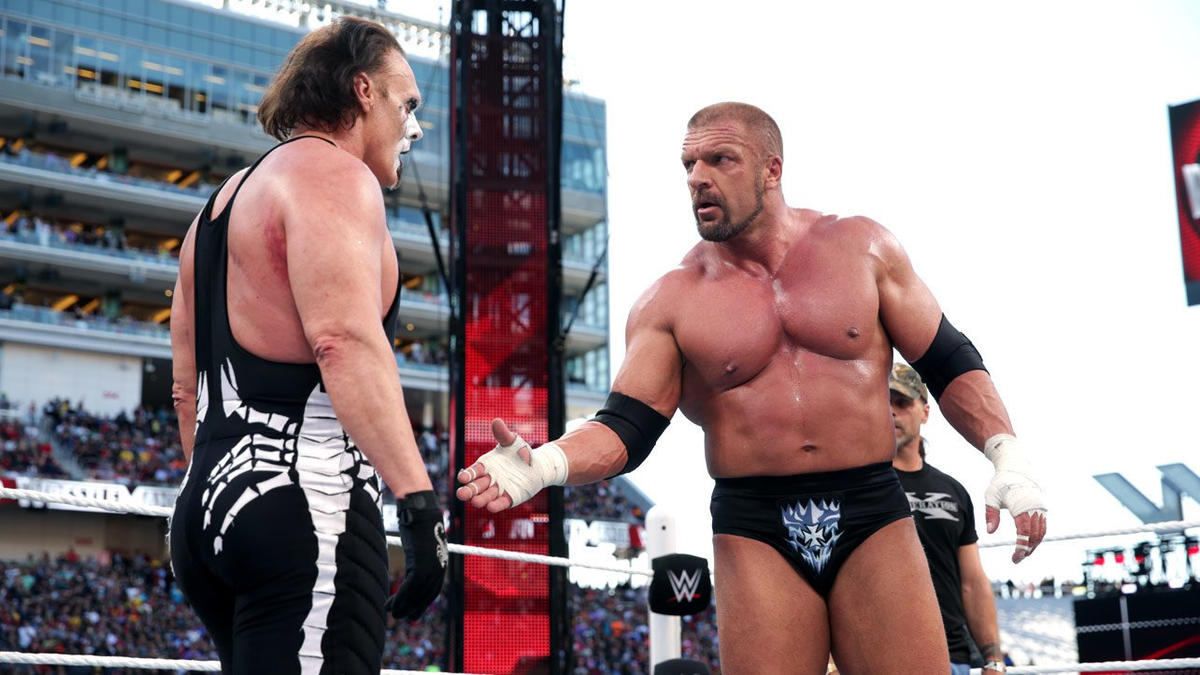 Both guys get mega entrances. HHH’s was slightly more ridiculous and paid for by that garbage Terminator movie. Seeing Sting at WrestleMania is still really trippy no matter how you slice it. I still think he should have shaved his head like late era Muta though. As far as the match? Well, it was decent but made worse by JBL’s dumb ass commentary all the way through. Once we started getting random run ins this thing turned into all sorts of fun. If seeing the NWO vs DX fight didn’t bring a smile to your face I’m not sure what to tell you. The pop for the NWO was crazy. This was a fun match and really that’s all you can ask. Wrong guy still won though. 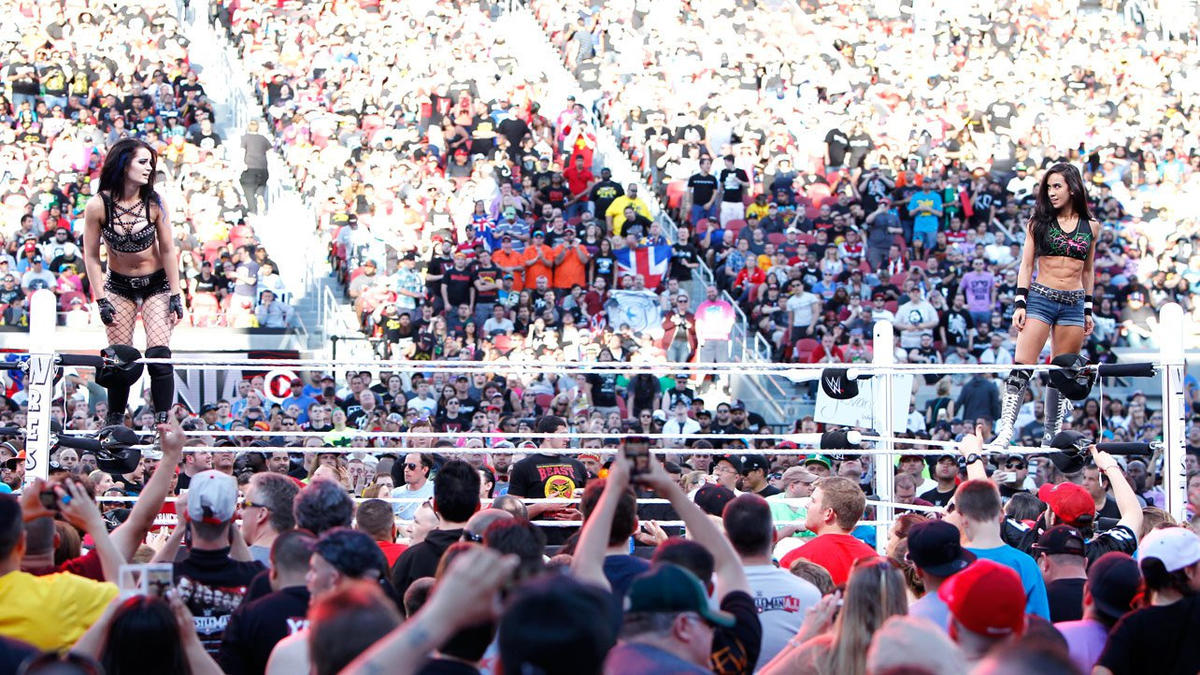 Paige and AJ Lee vs “The Legendary, Groundbreaking, Best Female (and male) Wrestlers of all time” The Bella Twins (Diva’s Champion Nikki and Brie)

I miss AJ. She was on the floor for most of this crap though. This was too short and too Bella dominated to be real good. At least Nikki was in there most of the time, she was alright at this point. Unfortunately for all these ladies this was still a little before the Women’s Revolution went into overdrive so Lawler made sexist jokes the entire time. All six minutes or so of it.

Winner: AJ and Paige got the win after Nikki tapped to the Black Widow. 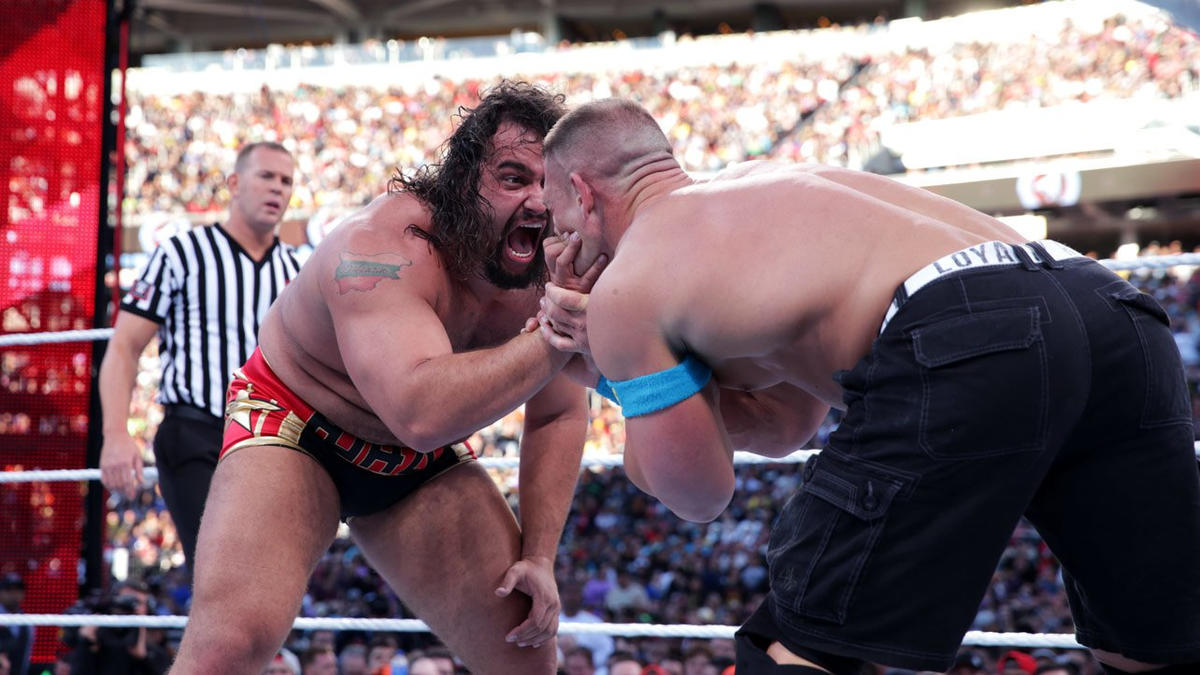 Yeah everyone remembers Rusev arriving on a DAMN TANK but does anyone remember Lana’s all white business suit? Shit was fire y’all. My theory is that Rusev lost all his superpowers when he put boots on. Prove me wrong. John Cena’s MAGA entrance is something. Poor bastard, out there representing America and still getting booed. Once it got going this was like a more athletic version of a 1980’s Hogan vs Monster match. Not that it was bad or anything but it was definitely formulaic. Except for the Springboard Stunner, that’s pretty cool. In the end it was all Super Cena at the big show, whether that’s good or bad is up to you.

Winner: Cena got the win after becoming the first man to break the Accolade and pin Rusev. Poor Lana even got knocked off the apron. Then it was off to the mid-card for our friend Rusev, where legend says he stays to this very day. 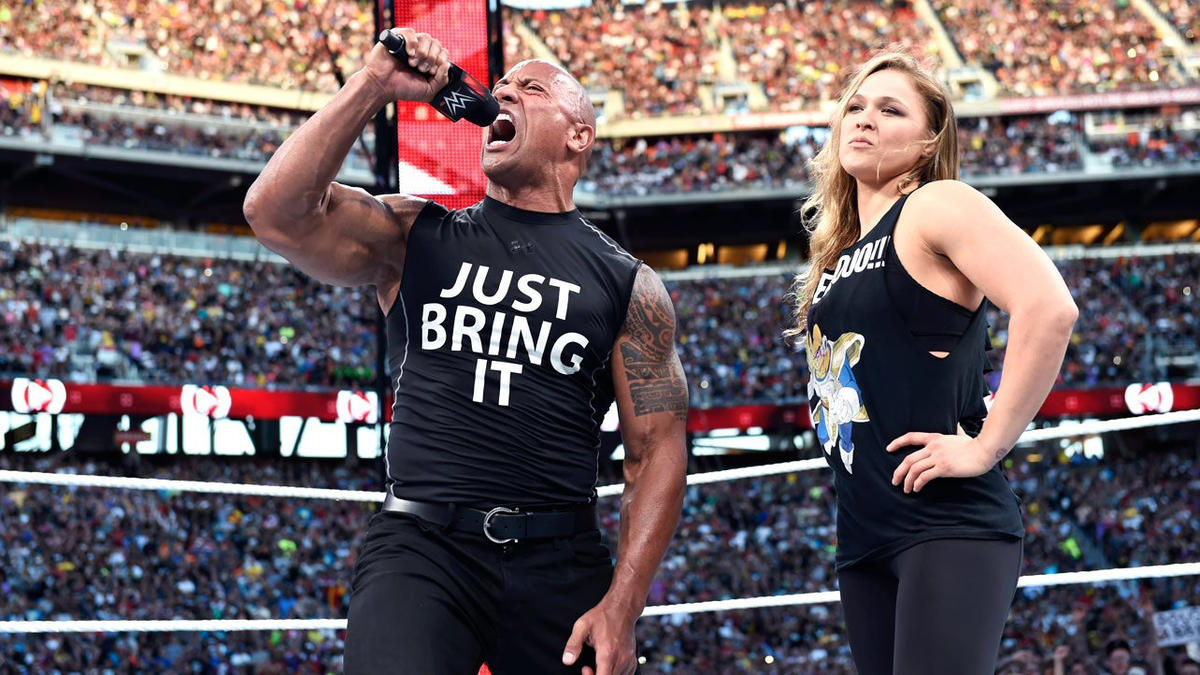 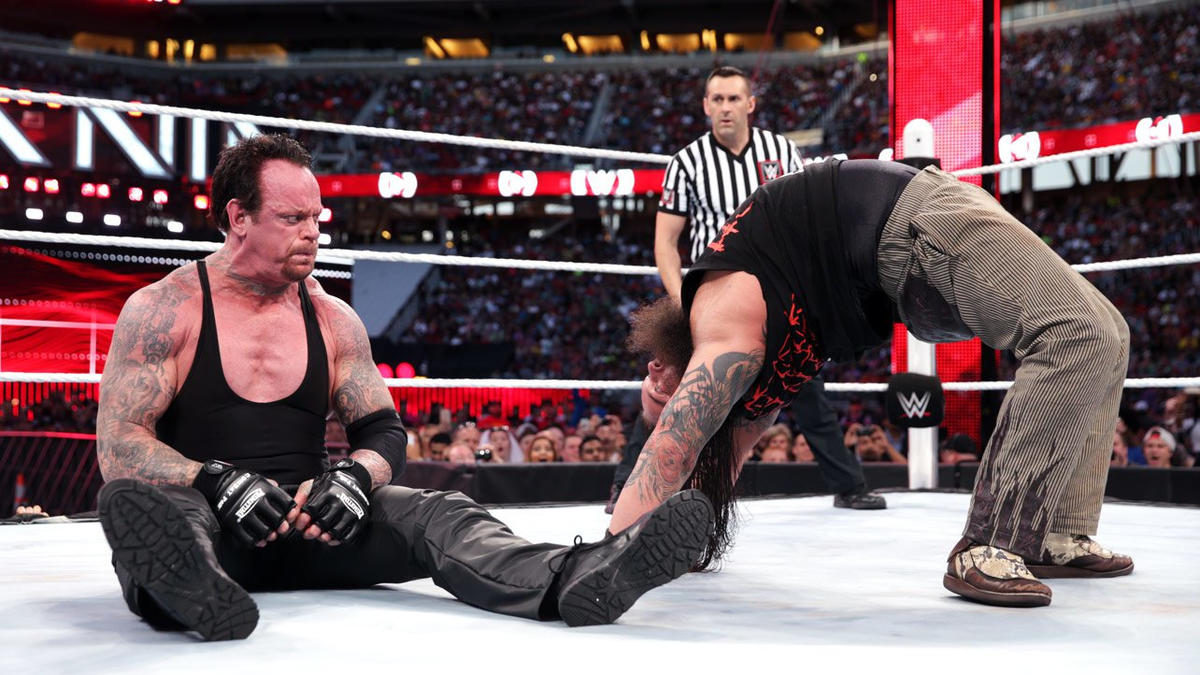 Bray Wyatt vs The Undertaker

Bray got the zombie scarecrow entrance that kinda ruled. Taker got the normal entrance which is always great, just less so in the daylight. Then we got to the match. It was OK. Really punchy, kicky and slow. Bray was coming in with an injury and Undertaker was obviously slowing down. It wasn’t bad at all it’s just something that I would be alright with never seeing again. Bray getting to kick out of a Tombstone was a nice moment but this match left him in a worse spot after than he was in before. Undertaker was starting that decline that he never really go out of. This is just sad more than anything else.

Winner: The Undertaker got the win following another Tombstone. 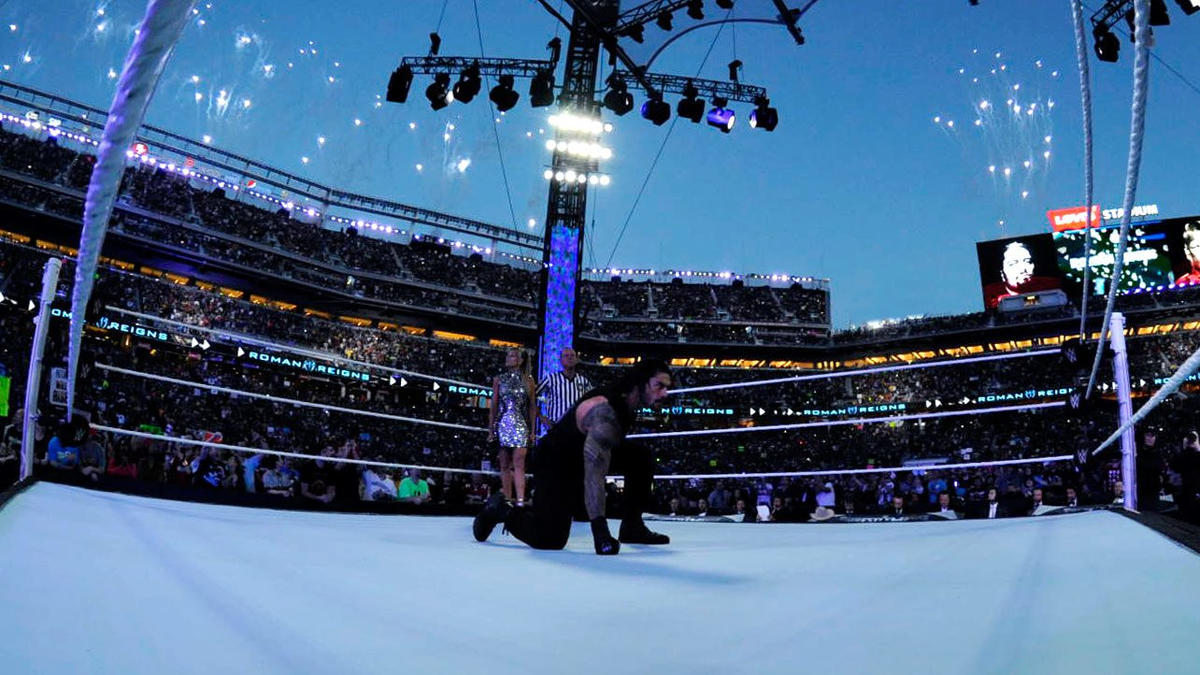 In retrospect we were all jerks for booing Roman like we did…but he was stale. Man, Roman was still coming through the crowd here, let it go man. He also still had those blue contact lenses that I hated. Brock nails him with a German and F5 like a minute in. Brock just murders Roman, they try the “he’s smiling” bit to get the crowd behind him but it didn’t work. “Suplex City Bitch”. Every time Roman moves the crowd boos. It didn’t matter, WWE tried to sway this later like Roman had the win but come on. This was a beating. The only legitimate offense Roman had was after Brock killed himself on the ringpost. Two spears and a ton of Superman punches only get a 2 for Roman. The Roman walks into another F5 that leaves both men down…and then Seth Rollins’ music hits. 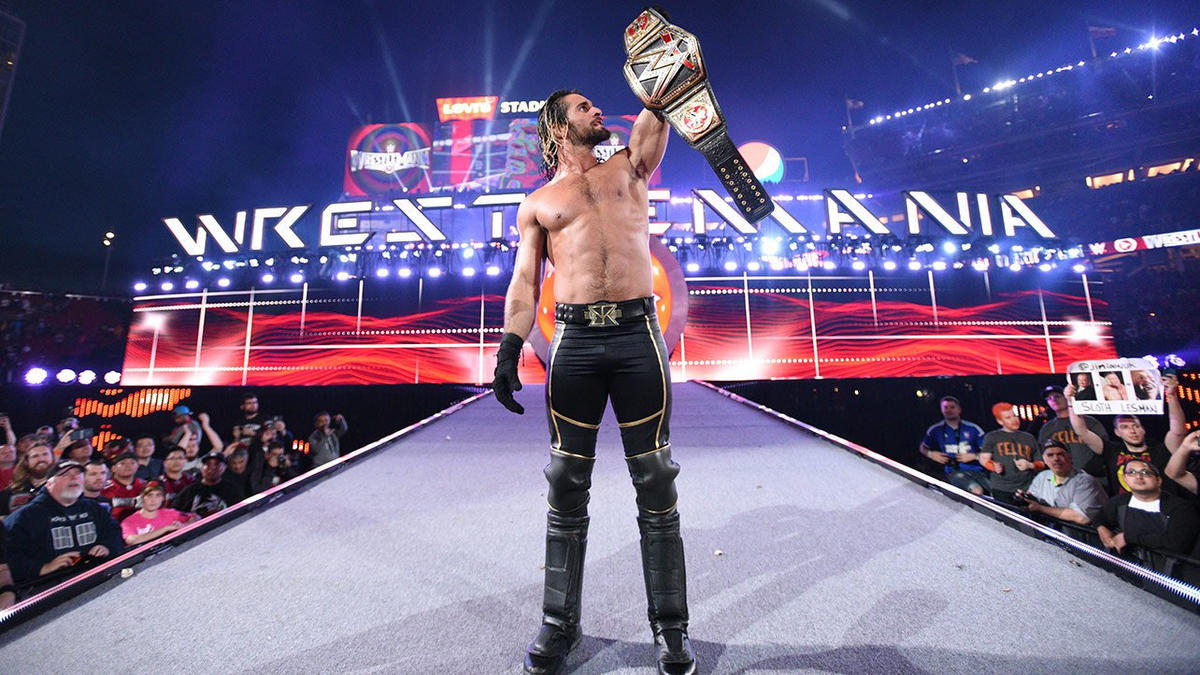 Seth came down to the ring to one of the biggest babyface pops you will ever hear, to cash in the Money in the Bank and make this a triple threat. Seth nailed Brock with the curb stomp but got caught on the second in the F5 position. Roman speared Brock to stop that but left himself vulnerable to the curb stomp.

Winner: Seth Rollins captured the championship to one of the loudest ovations and best bit of booking that you will ever see.

Overall Thoughts: Easily one of the best WrestleMania’s.  Even the stuff that wasn’t all that good on a technical level wasn’t hard to sit through and watch. The main event was a moment that people will never forget and the under card had some really standout moments as well. Top notch stuff from WWE on this one.