Well we are ever so closely inching towards Money in the Bank and it definitely feels like the story lines are hitting a major standstill. Expect another week of building momentum and circular storytelling. We should get new number 1 contenders to the tag belts though, that’s something right?

So the deal is I look at the Raw preview on the official WWE website and then give my opinion on it.

1) The Monster Among Men faces The Glorious One

“As Bobby Roode learned when he absorbed an unexpected beatdown from Braun Strowman this past Monday night, it will be every man for himself in the Men’s Money in the Bank Ladder Match, where eight Superstars from Raw and SmackDown LIVE collide for a chance to earn a World Championship opportunity at the time and place of their choosing.
But that’s WWE Money in the Bank. Monday on Raw, The Glorious One will stand across the ring from the goliath who calls himself “Monster Money in the Bank.” Can Roode leave Houston unscathed?”

An Idiot’s Opinion: Poor Bobby is dead in the water without that heel turn. Him acting like a complete and total dork last week may be hinting to him turning back into the disingenuous jerk that we all know and love. One way or another Braun is going to stomp his ass, so I hope we get a little of the old Bobby back tonight so he doesn’t seem like such an afterthought. Just for the record, my hopes rarely happen.

“Speaking of the Men’s Money in the Bank Ladder Match, two other competitors in that high-stakes contest will be in action when Finn Bálor takes on Kevin Owens.

Owens inserted himself into this past Monday’s match pitting Bálor against Braun Strowman, and WWE’s first Universal Champion seemed primed to defeat The Monster Among Men until KO intervened and caused a disqualification. Retribution will surely be on the Irishman’s mind when he squares off against his bitter foe on Raw.”

An Idiot’s Opinion: Building momentum! Look, this is going to be a good match because of the talent involved but them trying to add intrigue the way they have has been lazy as hell. Here we have another situation where we will see every combination of these guys before the PPV. I expect a big tag match next week, or maybe a gauntlet match where the winner gets to stand on the third rung of the ladder to start the match! Something that is sort of a thing…but not really.

3) Natalya stands up to Nia Jax

“This past Monday night, Raw Women’s Champion Nia Jax toyed with a local competitor to show Ronda Rousey the torment that awaits her in their title bout at WWE Money in the Bank, and when The Baddest Woman on the Planet confronted The Irresistible Force, Jax simply laughed in Rousey’s face and walked away — clearly unconvinced that the UFC veteran represents a true challenge in a WWE ring.

After witnessing Nia’s disrespect toward her longtime friend and training partner, Natalya will lock up with the cocky champion on Raw in Houston. “

An Idiot’s Opinion: I have been mentally preparing myself for Natalya winning the MITB and the title for a while now but it isn’t working. Them doing all this heavy handed foreshadowing really isn’t helping the situation out either. I know we are all supposed to forget Natalya was an awful person not long ago but I can’t. Not only can I not forget that but I also can’t forget that I just can’t stand her as a performer. As soon as she opens her mouth every bit of my interest in a story goes straight out the damn window. Not being fired due to a lack of talent in a division should not be as constantly rewarded in this company as it is but here we are. Hey! Way to not be awful in 2011! Here’s a win over Rousey and a title. Ridiculous. 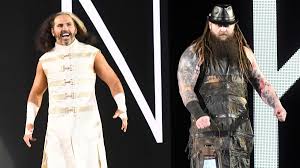 4) Who will be next to challenge The Deleters of Worlds?

“After The B-Team’s barbecue devolved into a coleslaw-slinging melee, the frustrated duo approached Raw General Manager Kurt Angle to demand a Raw Tag Team Championship opportunity against “Woken” Matt Hardy & Bray Wyatt. However, on the red brand, opportunities are earned, so on Raw in Houston, Curtis Axel & Bo Dallas will be among the participants of a Tag Team Battle Royal, in which the last team standing will be next in line to challenge Hardy & Wyatt for their titles.

Regardless of what you think of them, The B-Team have impressed in the ring recently. Could The “B” in B-Team actually stand for “Best” when this match is over?”

An Idiot’s Opinion: I love the B-Team but if the Authors of pain don’t come to that ring and murder everyone in the match I don’t even know how to feel anymore. They have already ruined the Revival and killing another NXT tag team (Ascension, American Alpha etc.) seems counter productive at best. Once again my thoughts on this never match the WWE’s so expect the B-Team to move past the comedy immediately and become the next Demolition.

Overall Opinion: Yeah… this is going to be a time wasting three hour placeholder show. On a positive note we will get number one contenders but on a negative note it won’t be who it should be probably. Lord give me the strength to make it through this show tonight without any beer in the house.

ALL IMAGES AVAILABLE AT WWE.COM