Another day, another pro wrestling show. Last night was a huge night for our friends at Paradigm because they crowned both their first Tag and Heavyweight champions in a night of fun action. Let’s check it out.

Notes and Opinion: Josh grabs the mic and gives Freddie the chance to lay down and bow out gracefully. He does not. In retrospect probably not a super wise call.

Notes and Opinion: I know it had to be hard to follow that last barn burner but they pulled it off. After the comedy that Mikey usually brings finished up, these two had a pretty good hard hitting match. Mikey has that 1987 Rick steiner thing where he acts like a complete weirdo but then beats your ass for doubting him. It’s pretty awesome, I also discovered he is a good hugger. Shawn is also a talented guy so putting these two together was a good idea that paid off. Fun match.

Winner: Mikey won with a double kick to the face, kinda a seated dropkick if that makes sense.

Notes and Opinion: Another fine match between two talented up and coming youngsters. Bret plays cocky really well and did a great job playing off a monster like Jackson. Clayton keeps improving guys, if he continues at this rate, with that size he could be huge sooner rather than later. Another really fun match.

Winner: Clayton got the win following a spear and Muscle Buster.

Notes and Opinion: This was a hell of a way to go into intermission. Both of these kids are super talented and put on a show. It’s hard to fathom how good they will both be at 25. Really good back and forth stuff with both guys knowing the other so well and pulling off some great counters. Plain and simple, this was two bright young stars busting their asses and putting on a great show. Top notch.

Winner: Corey got the victory with handspring cutter.

Notes and Opinion: Another battle of two super talented young guys. Kenway has all the potential in the world and is already a very good performer in the ring. Ace is just that, an ace, the guy is on fire right now. Another really fun first round match that these two guys should be proud of. Although I’m deducting points from Kenway for calling me a failure when someone else’s kid was talking shit. Jerk. (kidding)

Winner: Ace got the win with his jumping blockbuster deal that I’m sure has a name.

Notes and Opinion: Youth is the name of the game on this show and we have two more youngsters here. Nate is a fun little high flyer that has no problem taking a few shots to give one. Lexus is a great talent that has already stolen the show at Paradigm before. This ended up being a solid little match and both guys busted their tails to make it fun. Not bad.

Winner: Lexus got the win with a huge knee strike.

Notes and Opinion: This really didn’t get a chance to go too far before Josh Ashcraft and LOB member Logan James made their presence felt by attacking Ace Austin. Most of this match was a singles between Corey and Clayton which they did well with. Ace managed to fight his way back out but unfortunately it led to an immediate pinfall from Clayton after the actions of James. This was a good match though and had a lot of extracurricular activities going on.

Winner: Corey got the win with the Rey Mysterio roll through pinfall reversal.

Mikey vs Lexus Montez vs Daniel Eads with Josh Ashcraft

Notes and Opinion: Mikey had the crowd going pretty early but this ended up being a masterclass in being a cheating jerk by the LOB. After he eliminated crowd favorite Mikey with a Superman punch, Eads was able to take advantage of every opportunity out there and use his (if we are being perfectly honest) incredible size, skill and talent to pull off a huge win and make it to the finals.

Winner: Eads got the win after pinning both Mikey and finally Lexus. 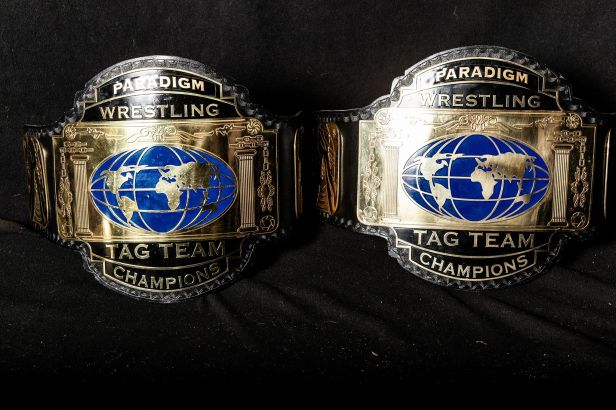 Notes and Opinion: A little upsetting that we didn’t get the full Dirty due to injury but the Manix and Joshie team did alright together for a bit. Well, until Joshie accidentally nailed Manix and cost them a shot at the belts and Manix murdered him. Win some, lose some I guess. After they were gone this turned into an all out war between the Rejects and Top Guys. They fought all over the arena (including my lap) and really busted their asses out their to win the belts and put on a show. Giza was even tossed off the damn crows nest onto a mass of humanity at one point as a highlight to this craziness. It was a hell of a fight but in the end even the Rejects Judd Nelson Driver wasn’t enough to pull off the victory.

Winner: The Top Guys got the win and the titles after Giza pinned Murdoch with a rollup after surviving the JND. NEW CHAMPIONS!

Notes and Opinion: Before this broke out into madness, Doug barred everyone not in the match from ringside. Unsurprisingly this pissed off Ashcraft to no end. So after a night of shenanigans, we would have a fair fight in the finals. For a while it was just that. Both guys did a great job and had the fans buying what they were selling. Corey is so good at the babyface role that it seems like second nature. Eads for his part is easy to buy as the bully because the guy has all the physical tools in the world and ends up relying on cheap shots because deep down all bullies are scared of people that fight back. Really good story. In the end though the LOB made their presence known again. Ashcraft caused a distraction which was countered by Saint that ended up costing Corey a clear pinfall victory. Once order was somewhat restored, referee Max was shoved into the ropes, crotching Corey and inadvertently costing him the match.

Overall Thoughts: This was a fun show overall. Everyone worked their asses off and it’s really fun watching some of these young athletes getting their chance to shine on a big stage like this. My only issue at all was the victories from the heel side at the end of the night. It kinda took the air out of the crowd a bit, especially with the Top Guys turn. Heel champions are an asset to have, but on a long night like this with 10 matches it doesn’t hurt to give the fans a little something to be happy about. Not a huge complaint though, Paradigm does a good job and I’ll be back. You should come too.